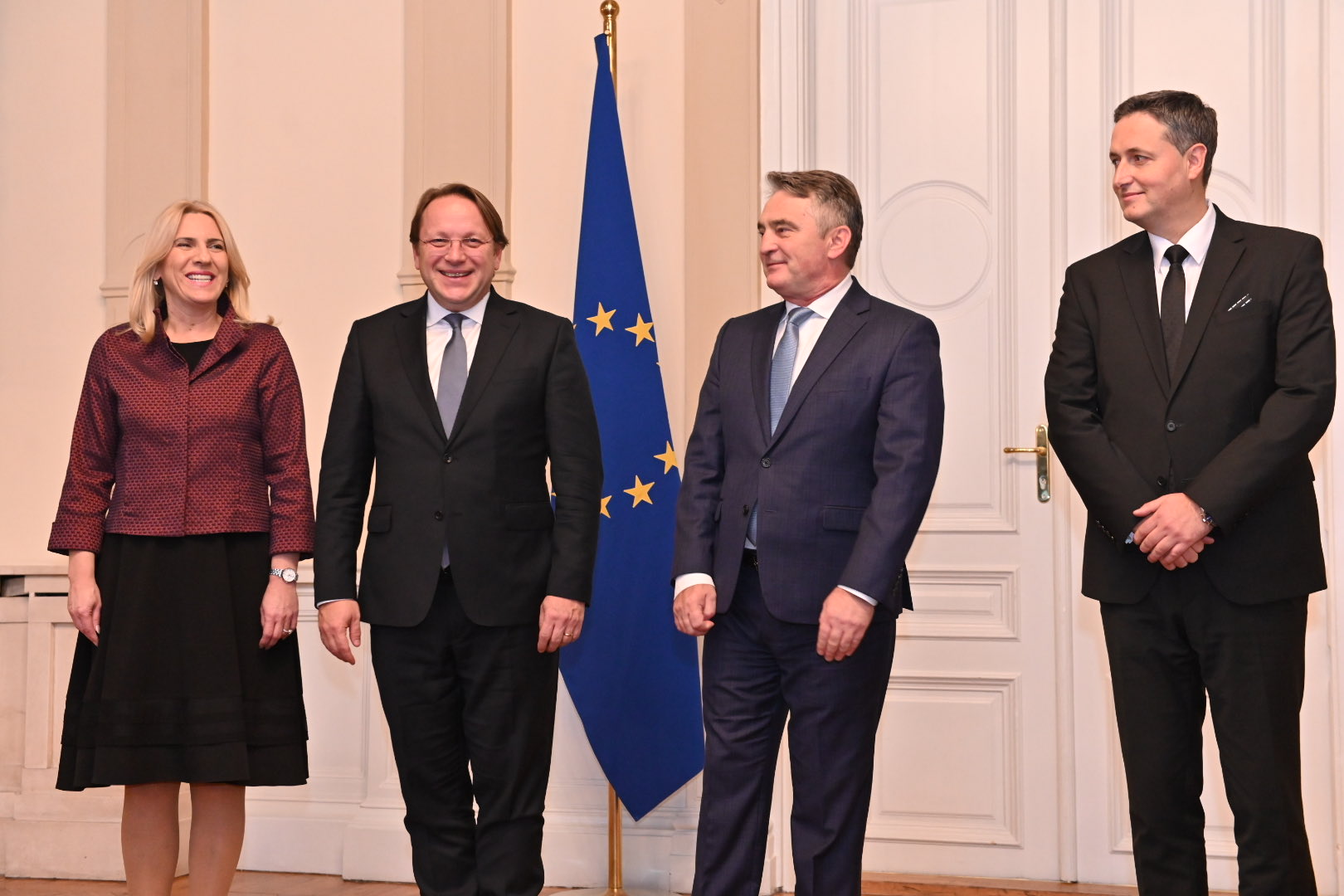 SARAJEVO – The European Commission’s recommendation to grant EU candidate status to Bosnia and Herzegovina represents an offer to the citizens of the country but also comes with “high expectations” to achieve tangible and visible “progress on necessary reforms”, said EU Enlargement Commissioner Olivér Várhelyi after meeting with BiH Presidency Members, N1 reported.

“We are doing this for the people of Bosnia and Herzegovina. We are very transparent because our recommendation is very clear. We want candidate status granted to Bosnia and Herzegovina now. But this is also a recommendation that comes from our side with high expectations. The EU path is open but it requires your country to deliver. We expect these steps to be taken forward without delay. It is now for the political leaders of this country to turn this into reality for the people of this country,” Várhelyi said.

According to Enlargement Commissioner, he came to BiH “at a critical time, we all in the EU, in our neighbourhood, our partners and our allies are in the middle of a geopolitical turmoil that is brought by a war so close to us.”

“In these turbulent times it is our utmost strategic interest and need to strengthen all our partnerships and we need reliable, trusted allies in our neighbourhood. We need to move faster ahead with our common positive agenda,” Várhelyi  said.

The EU official noted that the EU Commission recommended granting EU candidate status to BiH recently and that he came to Sarajevo to discuss “how do we get this done for Bosnia and Herzegovina?” The decision on whether to grant BiH candidate status will ultimately be up to the EU member states, Várhelyi said and explained that granting it would represent an “offer for the people of Bosnia and Herzegovina.”

“We are doing this for the people of Bosnia and Herzegovina. We are very transparent because our recommendation is very clear. We want candidate status granted to Bosnia and Herzegovina now. But this is also a recommendation that comes from our side with high expectations. The EU path is open but it requires your country to deliver. We expect these steps to be taken forward without delay. It is now for the political leaders of this country to turn this into reality for the people of this country”, Várhelyi told.

“Of course, your role is decisive to make it real, tangible and visible. So, we can report about the progress ahead of December’s European Council this year that we very much hope will take the positive decision and grant the candidate status for Bosnia and Herzegovina,” Varhelyi stressed.

However, he noted that, in order for this to happen, the outgoing BiH Council of Ministers must adopt all pending measures to advance on the EU agenda and the Presidency must ensure that EU integration and the 14 key priorities the European Commission defined for BiH to focus on in terms of reforms must be the priority for the newly elected government during the next 4 years.

“I am very pleased to hear from all Members of the Presidency that this is the aim of the Presidency as well and this is very reassuring. Given the challenges and the tasks ahead, of course I have encouraged the Members of Presidency to step up their efforts and create an environment of trust, constructive dialogue and good cooperation. So, that the Presidency can become even more effective as it was in the past,” Varhelyi said.

He welcomed “positive developments” that took place since the EC recommendation, noting that it is very encouraging.

“We see that in the last 6 weeks things have been moving faster than ever. I do hope that this will only accelerate even further. Because I have great trust and expectations in the leadership of Bosnia and Herzegovina. Otherwise we would not have engaged in this way with Bosnia and Herzegovina. This is why we are ready to help them, to work for the citizens of this country to deliver on the EU agenda and to deliver the candidate status and a real perspective of EU membership for the youth and for the economy of this country. It is only through that the country will achieve its goals enshrined in the constitution,” Varhelyi said.

BiH Presidency Chair, Željka Cvijanović, said that she informed Varhelyi about the process of establishment of government in Bosnia and Herzegovina.

Cvijanović said that the government of Bosnia’s Republika Srpska (RS) entity will have its constitutive session within the next 10 days and expressed hope that the other semi-autonomous entity, the Federation (FBiH), completes this process within the next several weeks. She stressed that the Presidency is doing all it can to contribute to progress on BiH’s EU path.

The Bosniak Presidency member, Denis Bećirović, said that it is due time to take the steps necessary to achieve progress on this issue, arguing that this was not done by those who governed the country prior to the recent election.

Policy Brief: Civil society is necessary for progress on the WB Green Agenda