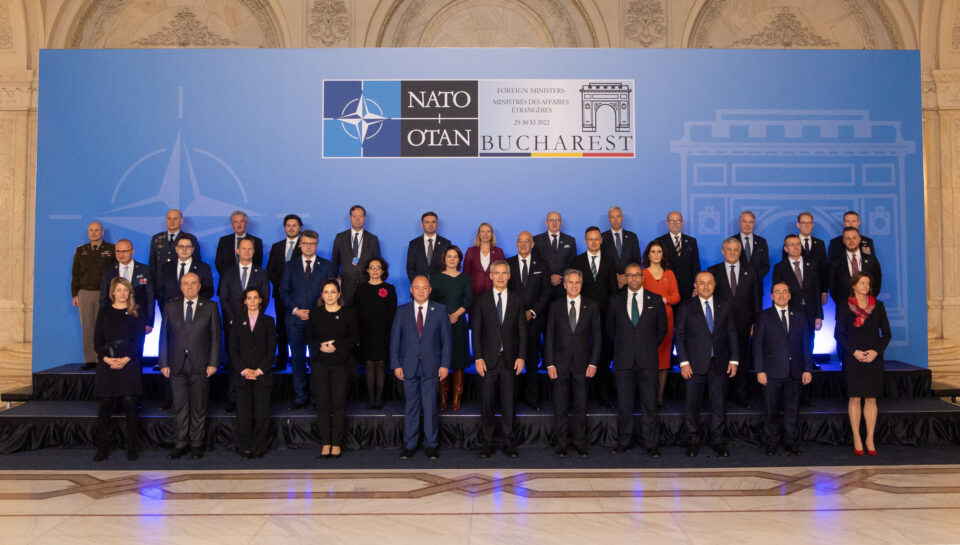 BUCHAREST — Western Balkans and the Black sea region remain of “strategic importance” for NATO, as outlined in the joint statement of NATO foreign ministers following their meeting in Bucharest held on 29 and 30 November.

The main topic discussed at the meeting was the Russia’s invasion of Ukraine and the continuing implications its has on global and European security. Since the war in Ukraine started, NATO increased its support to the partners from Western Balkans and the Black Sea region, namely Bosnia and Herzegovina, Moldova and Georgia. All three were invited to participate in the Bucharest meeting, with foreign ministers of these countries joining the final session of the ministerial.

In the statement, NATO foreign ministers confirmed their support to these countries in light of the security crisis the continent is facing, “as NATO strengthens its tailored support to building their integrity and resilience, developing capabilities, and upholding their political independence.”

The Alliance reaffirmed its commitment to the Open Door policy further in the statement, including the decisions from the 2008 Bucharest Summit and “all subsequent decisions with respect to Georgia and Ukraine.”

NATO Secretary General, Jens Stoltenberg, said that Bosnia and Herzegovina, Moldova and Georgia are facing pressure from Russia and that NATO “will take further steps to help them protect their independence, and strengthen their ability to defend themselves.”

“Today these partners are affected by Russian pressure, and NATO allies are committed to increasing their support to them. This meeting is an opportunity to discuss some of our shared security concerns, most notably in the strategically important region of the Black Sea and the Western Balkans,” as Stoltenberg noted in the opening remarks of the session.

Bisera Turković, Foreign Minister of Bosnia and Herzegovina who also participated in the Bucharest meeting, expressed concerns about the Russian influence in the country and stressed the importance of NATO presence as the “guarantee of security.”

“We have Russian proxies in our government and division in our country is deep,” Turković said, as reported by Reuters.

Italian Foreign Minister, Antonio Tajani, called upon Europe to limit Russian influence in the Western Balkans by increasing its presence in the region.

“The stability in western Balkans is important for peace. We need to stop the Russians in the western Balkans, we need more Europe,” Tajani said, as Reuters reported.

He emphasized the importance of unity in light of the war in Ukraine and urged the Alliance to “protect countries in the Western Balkans and close to Ukraine.”

The Foreign Ministers used this opportunity to discuss NATO’s attitude towards China as well. Stoltenberg warned that the war in Russia demonstrated the dangers of dependency of authoritarian regimes.

“We will continue, of course, to trade and engage economically with China, but we have to be aware of our dependencies, reduce our vulnerabilities, and manage the risks,” as NATO Secretary General emphasized.

[EWB Interview] Ildem: Stereotypes and myths about Serbia-NATO cooperation should be eliminated