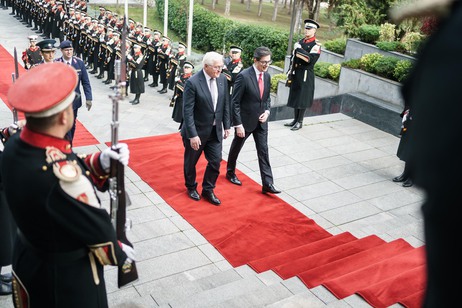 SKOPJE / TIRANA — European Union is not complete without the Western Balkans, said German President Frank-Walter Steinmeier during his official visit to North Macedonia and Albania, two countries that started their accession negotiations in July this year.

In the two-day visit to Skopje, President Steinmeier met with Stevo Pendarovski, President of the Republic of North Macedonia, and addressed the North Macedonian parliament. He congratulated North Macedonia on their start of the accession negotiations after seventeen years and expressed his respect for the country’s consistency in “showing political courage.”

“North Macedonia is on a very good path, as proven by the first EU accession conference as well as the European Commission’s country report. Further down this path, many more improvements await the people of your country. There are the measures to fight corruption and modernise the public administration, to name just two examples,” Steinmeier said in his address to Sobranie.

He emphasized the importance of the protocol agreed with Bulgaria and the need for the constitutional amendment which would recognize the existence of ethnical Bulgarian minority in North Macedonia.

On 1 and 2 December, President Steinmeier was in Tirana, where he met with Albanian President Bajram Begaj and Prime Minister Edi Rama to discuss current situation in the region, security challenges stemming from war in Ukraine and the country’s EU accession path.

“I know that Albania’s road towards the European Union will remain exacting. And my plea to you today is this: keep working to combat injustices, keep working to drive back corruption and organised crime, keep going with judicial reform. And work together across the opposition-government divide. The destination is worth it,” German President said in his speach in the Albanian Parliament.

President used both opportunities to embrace the progress made by all the Western Balkans countries in the framework of the Berlin Process by signing three mobility agreements in early November.

Western Balkans are not forgotten

In light of his visit to North Macedonia and Albania, President Steinmeier talked to DW about the European perspective of the Western Balkans countries in light of the current crisis caused by the war in Ukraine.

He said that one of the purposes of his visit is to show that the “Western Balkans are not forgotten” and that their progress towards the EU should be rewarded accordingly. Steinmeier also talked about the solidarity that Western Balkans countries have demonstrated regarding the war in Ukraine.

“As far as Serbia is concerned, we must stick to trying to convince Serbia that the path it is currently taking raises questions in terms of the seriousness with which it seeks a path to Europe. I have been following the path of the Western Balkans towards the European Union for almost 20 years and have often been to Serbia. I am sure that people in Serbia will not lag behind the desire that comes from other Western Balkan countries, to get closer to the European Union and join it one day. I can only hope for that and keep trying and to convince the political leadership in Serbia to clearly follow that path,” Steinmeier said in the interview for DW.

German President further touched upon the Belgrade-Pristina dialogue and the role of EU in facilitating it. He explained that the fact that EU has a strong and impactful role in the dialogue demonstrates the importance of the EU in the region and the commitment of all the Western Balkans partners to stay on their European path.

He added that the last crisis with license plates showed that EU leadership is capable of contributing to the conflict solution. If minor conflicts have proven to be solvable, then the energy should be committed towards solving bigger issues and achieving normalization of relations between Serbia and Kosovo, Steinmeier concluded.

Matić: Roaming elimination in the region by 2021