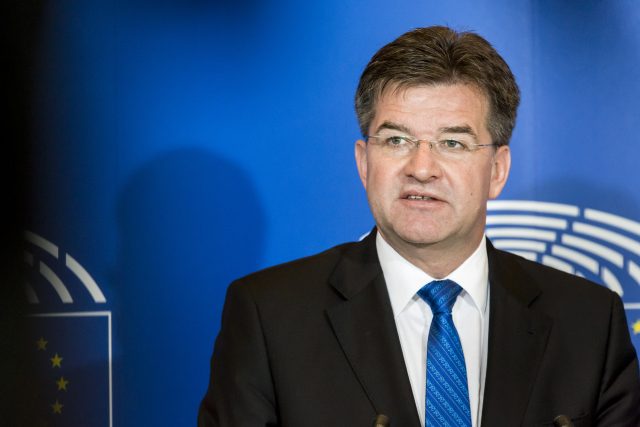 PRISTINA — EU Special Representative for the Belgrade-Pristina Dialogue, Miroslav Lajčák, announced in an interview for Kanal 10 a visit to Serbia and Kosovo next week, during which he will meet with the President of Serbia Aleksandar Vučić and the Prime Minister of Kosovo Albin Kurti.

Lajčák said that during the meeting with the two leaders, there will be discussion about the implementation of the license plate agreement, but also about the next steps towards the normalization of relations between Belgrade and Pristina in accordance with the Franco-German plan, as FoNet reported.

He emphasized the importance of the agreement reached on 23 November for preventing escalation on the ground, but he said that “small agreements” like this and the constant deadlines the parties in the dialogue were facing prevented them from focusing on the bigger picture — the normalization of relations.

“We spent a lot of time and energy to make sure that we maintain peace on the ground, especially in the north of Kosovo. Of course, it was impossible to focus on other issues, especially on the most important issue, which is the normalization of relations,” said Lajčák, as reported by N1.

Lajčák added that the from now on of the dialogue will be focused on normalization in accordance with the Franco-German plan, which he presented to Vučić and Kurti in September. Following Lajčák’s visit to the region, the EU will start preparations for the next high-level meeting between the two leaders.

Agreement between Belgrade and Pristina possibly in early spring of 2023

In an interview with RTV 21, Lajčák said that a comprehensive agreement for the normalization of relations based on the plan of France and Germany could be reached in the early spring of 2023, as reported by N1.

He pointed out that both sides understand the importance of dialogue and the normalization of relations, but also that crises on the ground prevented them from directing their energy towards achieving long-term solutions. Lajčák expressed his satisfaction with the level of cooperation with the United States in the Belgrade-Pristina dialogue, but added that neither the EU nor the USA “can wish for normalization more than Kosovo and Serbia.”

“If the parties do not come to an agreement, then there will be no normalization, and therefore no progress on the European path,” Lajčák told RTV 21 TV.

According to him, it is necessary to use the current moment and the support of the EU and the USA to achieve a sustainable solution, because if there is no agreement by 2024, there may not be one at all. Elections are to be held in the EU and in the USA in 2024, so it cannot be expected that there will be time and opportunity for the parties to focus on the dialogue between Belgrade and Pristina.

“What will happen after the elections, especially the American ones, is difficult to predict, so I say that what is not done by the beginning of 2024 may not be done at all. Therefore, let’s take advantage of this opportunity and all the support of the international community and achieve as much as we can for the complete normalization of relations,” as Lajčák emphasized.