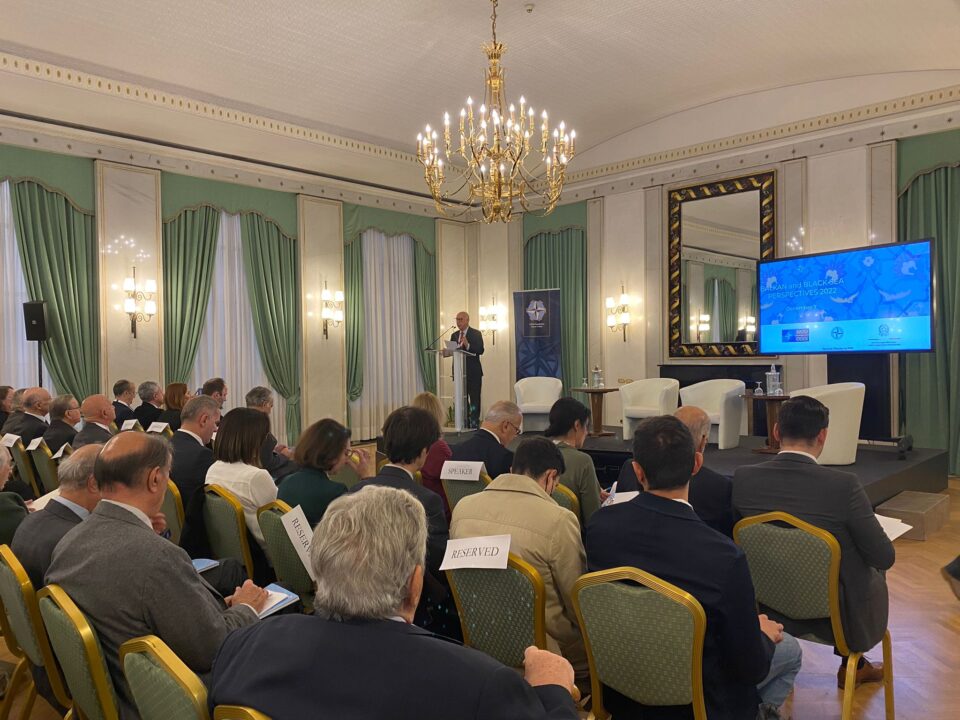 ROME — Southeastern Europe is more important than ever due to its strategic role, and now its importance has finally been recognized by the international community, said Ambassador Alessandro Minuto-Rizzo, President of the NATO Defense College Foundation, at the opening of the conference Balkan and Black Sea Perspectives 2022: Supporting the transition held on 7 December.

The high-level conference gathered decision-makers together with security and policy experts to discuss the most pressing issues in the region in the current geopolitical circumstances, but also long-term perspectives for securing peace and stability in the Western Balkans and the Black Sea region.

Organized by the NATO Foundation in cooperation with the NATO Public Diplomacy Division, the Italian Ministry of Foreign Affairs and International Cooperation and the NATO Defense College, the conference consists of three thematic sessions focusing on regional integration perspectives, the role of international community in addressing the grey areas in the region and consolidation of fragile democracies.

Alessandro Minuto-Rizzo, former Deputy Secretary General of NATO, opened the conference by emphasizing the importance of the Western Balkans and the Black Sea region in the current geopolitical circumstances, but also reminded that NATO Foundation has expressed consistent interest in the region over the past years through the project Strategic Balkans.

“Southeastern Europe has always been crucial for European security, at the crossroads of many interests and ambitions” Minuto-Rizzo stated.

He reflected upon the common problems countries in the region share, which are the topic of today’s conference, such as fragility of democracies and the threat existing disputes pose to stability, but also a wide range of economic and demographic issues the region is characterized by.

Ambassador Minuto-Rizzo said that the “Western Balkans and the Black Sea region should become an integral part of Euro-Atlantic community” and that the region should be moving in the “direction of inclusion.” He added that the “Russian aggression on Ukraine added a certain sense of urgency in this matter.”

President of the NATO Foundation concluded by saying that issues with democracy, grey areas, reforms and inclusion in EU and NATO are not new, “but the events show that they remain important” which is why these are the topics discussed at the conference in which “priority is given to voices coming from the region.”

Pasquale Terracciano, Director General of Public and Cultural Diplomacy at the Italian Ministry of Foreign Affairs and International Cooperation, described the topics of the conference as “key issues which can shape the future of the region” and added that the conference is “extremely timely.”

“Western Balkans and the Black Sea region are experiencing a relevant degree of political uncertainty insecurity which has implications on EU and NATO as well,” Terracciano stated.

He also emphasized the strategic role of these two regions as the “bridges between Russia and Mediterranean Sea.”

The Italian diplomat stressed the importance of regional integration which “seems to be swimming in troubled waters” due to the slow and uneven pace of EU integration of the Western Balkans and lack of tangible results of regional economic initiatives such as the Open Balkans.

He also mentioned illicit trade and criminal networks which continue to undermine democracies of the region, thereby also threatening stability. According to Terracciano, international actors such as the EU and NATO, but also UN and OSCE, need to be more actively involved in the region and efficiently share the burden.

“Strong and coordinated political will of Member States of the organizations involved to reach viable compromises, and constant and frank dialogue with all countries in the region, especially though multilateral forums,” as he explained.