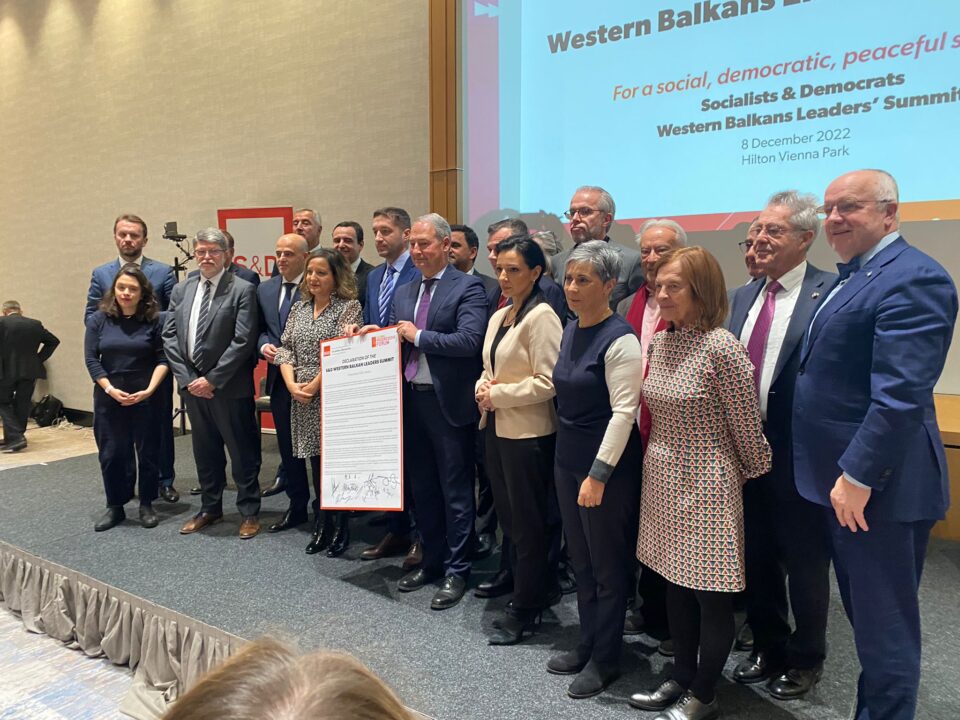 VIENNA — Socialists and Democrats in the European Parliament (S&D) reaffirmed their full support for the EU membership of the Western Balkan countries and called for acceleration of the enlargement process, it was stated at the Declaration adopted at the high-level S&D Western Balkan Leaders’ Summit on 8 December.

Declaration called for a progressive and inclusive process of enlargement, which will focus on the democracy, peace and prosperity, but also social inclusion, green economy, participation of women and young people. The goal of the S&D is “fully-fledged European Union Membership for all Western Balkan countries,” as it is stated in the Declaration.

The signatories welcomed opening of the accession negotiations with Albania and North Macedonia, hoping for “speedy progress in the individual chapters.” They also welcomed the visa liberalization for Kosovo moving forward and expressed their support for Kosovo’s EU membership application which is expected to be presented later this month.

S&D Declaration expressed regret about “political tensions slowing down the progress of EU-related reforms in Montenegro” and called for granting the candidate status to Bosnia and Herzegovina, should the country’s leaders “deliver on the necessary reforms to transform BiH into a fully functional state, with a European future.”

When it comes to Serbia, the Socialists and Democrats expressed regret about “the persisting deficiencies in the area of rule of law and lack of progress on EU-related reform in Serbia” and called upon the country’s new government to finally align with sanctions towards Russia.

“In the light of Russia’s illegal unprovoked and unjustified war of aggression against Ukraine, our cooperation on foreign, security and defence policy is more important than ever. The alignment with EU CFSP is part of the process of adopting the EU acquis, but also an expression of commitment to EU norms and values such as peace and multilateralism,” the Declaration stated.

Furthermore, the MEPs welcomed the establishment of European Political Community as a “useful forum for exchange,” but warned against it being used as an alternative to fully-fledged EU membership.

“We call on the Commission to make the enlargement more transparent, by including clear benchmarks. Merits and clear criteria remain key,” it is emphasized in the Declaration.

S&D Declaration highlighted the importance of cooperation with progressive partners from the Western Balkans on their path towards the EU. “Together, we will continue to work on building a common progressive perspective for the EU,” it is said in the Declaration.

Lastly, the signatories welcomed the results of the EU-Western Balkans Summit in Tirana, especially the roaming agreement, but called for more ambitious steps in the future.

Members of the S&D group expressed the importance of this Declaration and cooperation on the Western Balkan countries’ path towards the EU. Iratxe García Pérez, group leader of the Socialists and Democrats in the European Parliament and MEP,  said that Russia’s war of aggression against Ukraine reminded the EU of the importance of enlargement policy as “an engine for democracy, freedom, peace and prosperity on our continent.”

“Western Balkan countries, who have been seeking to join the EU for so long, deserve our full support in their reform process to be able to join the EU effectively and as soon as the set criteria are met. Further delays would only increase frustration among the citizens and make the region more vulnerable. Other actors, including Russia and China, will be there to fill the vacuum,” said García Pérez.

“As much as we want the EU to accelerate the enlargement process, it’s clear that its success also depends on countries aspiring to join our EU family. They must make clear pro-European choices! Too often political disputes or ethnic divisions slow down the progress of EU-related reforms,” Schieder pointed out.