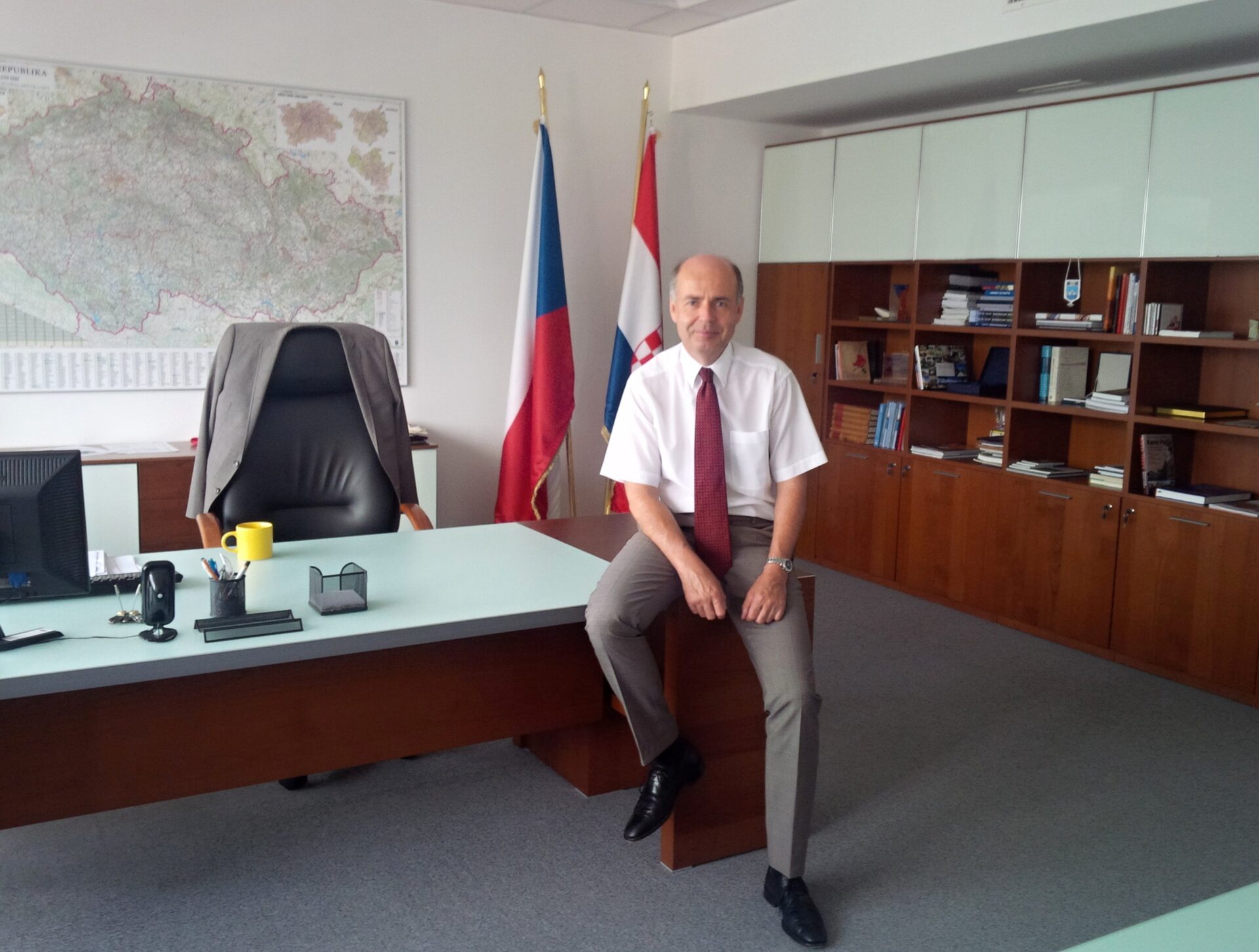 The Czech Republic ends its presidency of the European Union at the end of this year. Besides the war in Ukraine, the Western Balkans were high on the agenda. EU leaders agreed on granting candidate status to Bosnia and Herzegovina, visa with Kosovo, and opening accession talks with North Macedonia and Albania. Sweden, the next Presidency country, defined four goals – preservation of European unity and strengthening of security, green transition and energy policy, strengthening of European competitiveness and preservation and importance of European values, democracy and the rule of law.

About the results of the Czech Presidency, whether there is a will to keep enlargement high on the EU agenda, as well as what should be the priorities in the accession process with the region, we spoke with Deputy Minister of Foreign Affairs of the Czech Republic Martin Košatka in Prague.

European Western Balkans: When we are generally speaking about the Czech Presidency, how do you perceive the course of the Presidency so far? What has the Czech Republic achieved?

Martin Košatka: Everything changed with the Russian aggression against Ukraine. We had to make really important corrections in the priorities of the Presidency because we had to deal with issues like the assistance to Ukraine, sanctions against Russia or situation in the energy sector of the European Union. These problems emerged and we had to incorporate them as the highest priorities of the Presidency.

But still, the Western Balkans remained the priority as it had been planned before the aggression. Actually, we had three main concrete goals for the Presidency.

The first one was to start accession negotiations with North Macedonia and Albania. The second was to decide about visa liberalization for Kosovo, and the third one was to grant candidate status to Bosnia and Herzegovina.  So I think that we have managed to reach our three goals. I think that in general, these last six months have been good in regard to EU enlargement and the Western Balkans.

First, we have had a good EU-Western Balkans Summit – held for the first time in the region, in Tirana. As the European Union, we have not only reconfirmed our commitment to the integration of the Western Balkans, but we even called for acceleration of the enlargement process. We have held IGCs with Albania and North Macedonia. Bosnia and Herzegovina has received candidate status, Kosovo visa-free régime. Moreover, Kosovo has submitted an EU membership application.

EWB: I agree, but many expected that the first negotiation cluster with Albania and North Macedonia should be opened at the end of the Czech Presidency. Why that did not happen?

MK: It takes time. In the case of North Macedonia, we must wait for changes in the Constitution. But even in the case of Albania we could not open any cluster because first the European Commission has to complete its preparatory work.

EWB: Bulgarian demands have been accepted and we have new conditions for North Macedonia.

MK: It’s a deal that was done between Bulgaria and North Macedonia. We have just accepted their agreement. So, frankly speaking about the position of my country, the Czech Republic, we were not in favor of incorporating these bilateral issues into the enlargement process.

However, we had to respect this deal between the two countries and to organize the IGC under these conditions. There are no additional Bulgarian conditions.

EWB: According to the Czech ambassador to Serbia, one of the goals of the Czech Presidency was to open a negotiating cluster with Serbia, but that did not happen. Why? Was there even a debate about it, given the critical report of the European Commission?

MK: No, unfortunately, there has been no real debate on that. Of course, you always have some technical discussions. But, to be frank, the atmosphere is not conducive to opening new clusters with Serbia.

I can see three main hurdles in the case of Serbia. The first one, there is no progress in the area of the rule of law. The second one, there is no progress in the Dialogue between Belgrade and Pristina. And the third one is the very low level of harmonization of Serbian foreign policy with the EU Common Foreign and Security Policy. This is a major problem which is becoming bigger and bigger.

This problem was almost secondary some time ago, compared with the previous two. But with the Russian aggression, it has become a question of principle and now the European Union will really insists on alignment with the CFSP.

EWB: Will the issue of Foreign and Security Policy be more important than rule of law reforms in the accession process?

MK: It’ll be one of the main issues. It is a fact that the problem of the CFSP alignment has grown dramatically in the last months, but without positive developments on the ground, the rule of law will definitely remain a big obstacle in the European way of Serbia.

EWB: Enlargement was high on the agenda of the Czech Presidency. Do you believe that this trend can continue and is there political will in the EU Member States for that?

MK:  There is a common feeling in the European Union that we must give the chance to the countries of the Western Balkans. However, they have to do their homework. It’s clear the atmosphere has changed after the Russian aggression. The EU wants to demonstrate that it really does care about the region. It’s not about hard work and good results of one Presidency, it’s about the general will of the EU. This will is present.

For example, the granting of candidate status to Bosnia and Herzegovina is a clear political signal that the European Union is aware of the importance to give the chance to the countries of the region. Another question is whether these countries are ready to take the advantage of this approach and to deliver. We will see. We could discuss for quite a long time whether Bosnia and Herzegovina has been doing enough to get candidate status.

But we, as the European Union, thought that now it was the right time to give this positive signal to the new political representation of the country. Because now, it’s up to them to demonstrate that they will take the advantage of this candidate status. Still, there are 14 priority areas of reforms where they must deliver if they want to start accession negotiations. In this regard, there is no change. Candidate status should be understood by the country’s representation as an impetus to reform.

EWB: Serbian Foreign Minister Ivica Dačić has mentioned that Czech Presidency will not deal with Kosovo’s application for membership in the EU. Was the plan at all for the Czech presidency to deal with this issue?

MK: Each Presidency is expected to do what is necessary. Given the date when Kosovo decided to hand over the application (December 15), we did not have time to do more than inform the COREPER ambassadors of the EU member states that Kosovo had submitted the application. It will be up to the upcoming Swedish Presidency to start consultations with the member states.

EWB: What lessons from the Czech accession to the European Union can be useful for the Western Balkan region?

MK: First of all, it should be frankly said that accession negotiations are actually not negotiations. You are asked to adjust to the functioning of the EU. To be eligible to join the EU you have to bring all relevant pieces of legislation in line with EU law. The main question in these negotiations is the preparation and actual timing of aligning with EU law. It’s not anything negative, it’s a logical prerequisite. If you want to be a member of a club, you have to play according to the rules.

Our major experience, however, is that what really changes the situation and is the greatest benefit is not the moment when you are joining the EU. Much more important for the country, for the people living there, is the period when you prepare for membership and carry out reforms. This is what really changes your country and your life. The moment of accession is then a rather symbolic confirmation of the success.

EWB: Does the enlargement process itself still have strong transformative power as before?

MK: Definitely! But candidate countries must understand that they are not reforming to make happy the European Union but to create a state and society that works. In the Czech Republic, we understood the enlargement process as a necessary measure to transform our post-communist society to a functioning western democracy. This has to be understood and presented by politicians to the people in the right way. They are reforming the country for them, not for Brussels.

Bieber: The current situation in Kosovo is the worst in the last ten years

Decision on the 5th national television frequency in Serbia: Capture of REM as a mirror of captured society

Bushati: Two regional initiatives to be headquartered in Tirana