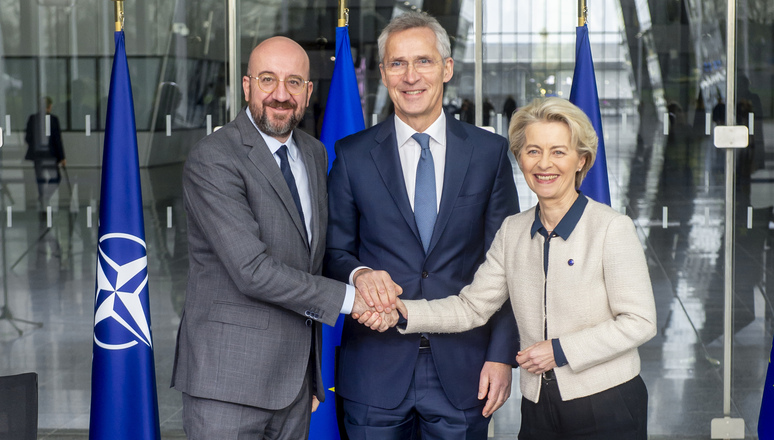 BRUSSELS — Euro-Atlantic security is facing its “gravest threat in decades” due to the Russian aggression on Ukraine, which is why expanding and deepening of EU-NATO strategic partnership is of crucial importance, it is stated in the Joint Declaration signed on 10 January by President of the European Council Charles Michel, President of the European Commission Ursula von der Leyen, and Secretary General of the North Atlantic Treaty Organization Jens Stoltenberg.

The third Joint Declaration of EU and NATO stresses the importance of shared values and commitment to peace, freedom and prosperity in addressing common challenges, the biggest of which at the moment is the war in Ukraine and its implications for global security and stability. The Declaration points out that Russian aggression, which violates principles of international law and the UN Charter, exacerbated food and energy crisis affecting an enormous part of global population.

“We condemn in the strongest possible terms Russia’s aggression. Russia must immediately stop this war and withdraw from Ukraine. We express our full solidarity with Ukraine and reiterate our unwavering and continued support for its independence, sovereignty and territorial integrity within its internationally recognized borders. We fully support Ukraine’s inherent right to self-defence and to choose its own destiny,” it is stated in the Declaration.

Another security challenge identified in the Declaration is authoritarianism, as authoritarian actors threaten EU and NATO values and interests by political, economic, technological and military means. In addition, the Declaration warns about “China’s growing assertiveness and policies” as a challenge that needs to be addressed in this era marked by growing strategic competition.

“Persistent conflict, fragility and instability in our European neighbourhood undermine our security and provide fertile ground for strategic competitors, as well as terrorist groups, to gain influence, destabilise societies and pose a threat to our security,” according to the Declaration.

This is why the Declaration calls for further mobilization of political, economic or military instruments in order to strengthen European security and contribute to international peace and stability. The roles of EU and NATO in achieving these goals are described as “complementary, coherent and mutually reinforcing,” while the importance of stronger and more capable European defense is emphasized as well.

As security threats and challenges both EU and NATO are facing are growing and evolving, the Joint Declaration emphasizes the need for “taking the partnership to the next level.” This means strengthening cooperation in existing areas, but also expanding and deepening this cooperation in order to properly respond to emerging challenges such as geostrategic competition, security implications of climate change or foreign information manipulation.

Lastly, the Declaration stresses the importance of transparency and “full mutual openness.” It encourages “fullest possible involvement” of all EU or NATO member states.

North Macedonia’s OSCE Chairmanship to focus on the people