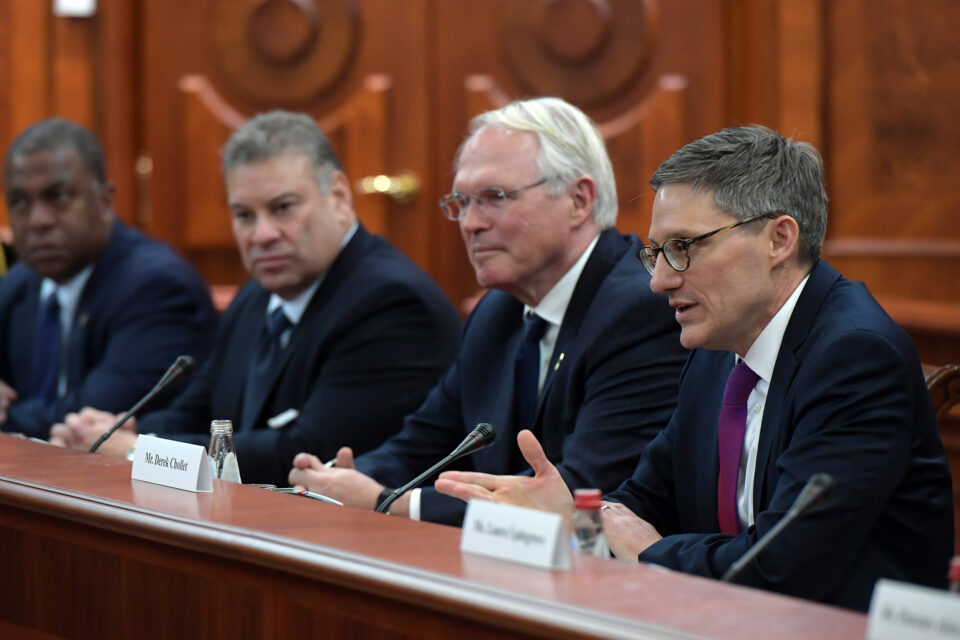 SKOPJE/PRISTINA/BELGRADE — I’m not here to give an ultimatum, but to support the dialogue together with our partners from the EU, said Derek Chollet, Counselor of the State Department, during the press conference in Belgrade. Chollet concluded his tour of the Western Balkans with a visit to Serbia, where he met with President Aleksandar Vučić, Prime Minister Ana Brnabić, Foreign Minister Ivica Dačić, journalists and civil society representatives.

Chollet said that the US considers Serbia a “constructive and pragmatic partner” and he talked to Serbian officials about Belgrade-Pristina Dialogue, energy, security and the economy. He reaffirmed American support for all efforts made with the goal of maintaining peace and stability and added that the US advocates for the focus on the Franco-German proposal in the Belgrade-Pristina Dialogue, as well as the establishment of Association of municipalities with Serbian majority (ASM).

The US wants to continue cooperation with Serbia in strengthening security, democracy and the rule of law, and strongly supports the region’s EU integration path and economic development, as Chollet said during his visit to Belgrade. He also stressed the importance of energy diversification and efficiency, which is another important area of cooperation.

“President Vučić and Counselor Chollet also discussed energy security, initiatives for regional connection and strengthening cooperation between the countries of the Western Balkans, as well as untapped potential in the development of bilateral and economic cooperation between Serbia and the USA. The interlocutors stated that the intensification of overall bilateral relations is a common strategic interest of both countries, and that the efforts of both sides should be further improved towards an even faster and more comprehensive strengthening of cooperation in numerous areas,” it was stated in the announcement by the President’s office.

When asked about the war in Ukraine and Serbia’s foreign policy, Chollet said that introducing santions to Russia is expected from all countries, but pointed out that Serbia made several important steps in the UN to denounce the Russian aggression, as RTS reported. However, he also expressed concern about the attempts to recruit soldiers in Serbia made by the Russian paramilitary Wagner group.

“We will cooperate with the authorities here in Belgrade and elsewhere where Wagner is active in order to put an end to their activities,” said Chollet according to Voice of America.

Support for reforms, peace and stability in the region

The first stop on the US diplomat’s tour was Skopje, where Chollet met with Prime Minister Dimitar Kovačevski and several ministers. Chollet thanked North Macedonia for its “continued commitment to Euro-Atlantic integration” and discussed topics such as energy, cybersecurity, the economy, the country’s OSCE Chairmanship and the fight against corruption during the meeting with North Macedonian officials.

Kovačevski said that rule of law and European integration were also on the agenda of the meeting. They talked about progress North Macedonia has made towards the EU and its commitment to accomplishing “superior rule of law, like in the EU, by 2030,” as Beta Briefing reported.

In Pristina, Chollet had meetings with Prime Minister Albin Kurti, with whom he discussed normalization of relations with Serbia, and with President Vjosa Osmani, during which he reaffirmed US-Kosovo partnership as steadfast and commended the stance of government in Pristina towards the war in Ukraine. He also met with opposition leaders, civil society representatives and journalists.

Counselor of the State Department further used this opportunity to meet with representatives of the Serb list political party and reaffirm the necessity for forming the Association of Serbian Municipalities. Chollet said that the recent events in the north of Kosovo emphasized the importance of ASM and called for full participation of both sides in the Dialogue led by the EU in order to overcome the crisis and reach a sustainable solution.

“It is necessary to make it clear that we do not want to support an organization like Republika Srpska. We do not ask Kosovo for any engagement that is inconsistent with the Constitution and the decision of the Constitutional Court from 2015. The Assembly of Kosovo ratified the Brussels Agreements and the Constitutional Court said that it is necessary to establish a Association of Municipalities with a Serbian majority — which we believe has become a legal obligation for the Government of Kosovo,” Chollet said during a meeting with journalists in Priština, as Voice of America reported.

EU and the Western Balkans in 2023: Fear of Instability and Cautious Optimism

Fajon: Bosnia must implement necessary reforms, EU is there to help

Popov: Serbia’s actions towards Macedonia undermining success of the Agreement

Dimitrov: How can the region become more European if successes are discouraged?