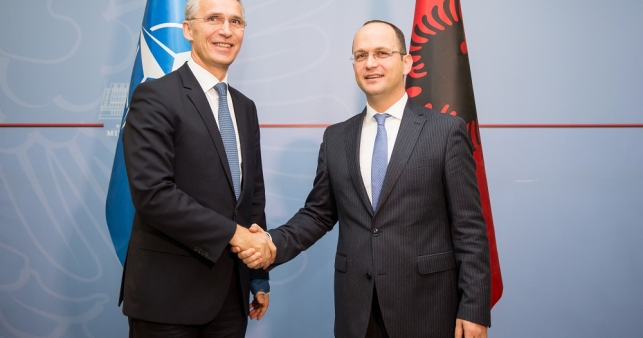 At this meeting, which takes place just a few days after the NATO Foreign Ministerial, Minister Bushati and Secretary General Stoltenberg discussed the measures taken by the Alliance, the ongoing work for a better adaptation against security risks in a radius 360° and the increase of the Alliance’s defense capacities.

Minister Bushati praised the leadership of Secretary General Stoltenberg in increasing the efficiency of the Alliance to respond to challenges in its eastern and southern flank. Moreover, he underlined the importance of the ‘open-doors’ policy for the Western Balkan region and highlighted the need for an institutionalized substantial interaction of the Alliance with Kosovo.

Secretary Stoltenberg, on his part, commended Albania’s role in strengthening stability and security in the Western Balkans and its contribution to NATO operations in Afghanistan, Georgia, Ukraine, KFOR in Kosovo, Bosnia-Herzegovina etc.

In the context of measures taken by Albania to fulfill commitments of the Wales Summit, Minister Bushati stated that “the government is undertaking steps to strengthen defense capacities by preventing budget decline and ensuring its significant increase for 2016».

Furthermore, parties discussed NATO commitments in the fight against terrorism and Albania’s role in the Global Coalition against ISIL. Minister Bushati and Secretary General Stoltenberg underlined the importance of strengthening the Alliance and enhancing cooperation with NATO Partner countries and other international organizations, with regard to the next NATO Summit to be held in Warsaw.