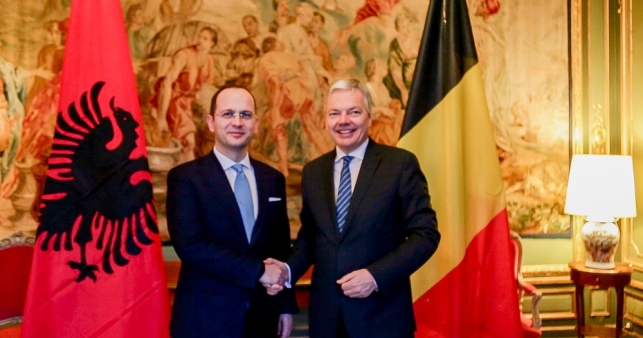 On the first day of his visit, Minister Bushati held a meeting with Deputy Prime Minister and Minister of Foreign and European Affairs of the Kingdom of Belgium, Didier Reynders.

Ministers discussed the boost of bilateral cooperation and further intensification of the very good relations between our countries. Proof of this cooperation is the decision to jointly implement the legalisation-free regime for public documents, known as the Apostille regime. In this context, Minister Bushati thanked his counterpart Reynders for the fulfillment of this commitment undertaken during his visit in Tirana.

Moreover, the two ministers discussed the progress of reforms undertaken by Albania, as well as prospects of Albania’s EU integration, focusing on the process of opening accession negotiations. Minister Bushati informed Minister Reynders on the progress of reforms undertaken by the Albanian Government and its commitment to pursue with the conclusion of the judicial reform, as an essential step for the consolidation of the rule of law in the country. He praised the extremely important role of Belgium in Euro-Atlantic integration processes, as well as its unwavering support in this regard.