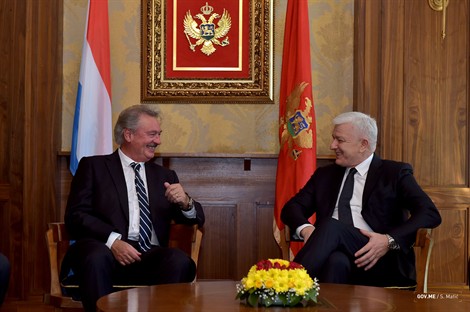 PODGORICA – At a meeting with Minister of Foreign and European Affairs of the Grand Duchy of Luxembourg Jean Asselborn, who is on an official visit to Podgorica, Prime Minister of Montenegro Duško Marković said that the excellent bilateral cooperation between Montenegro and Luxembourg at the political level needs to be further enriched by strengthening economic cooperation, especially in the fields of tourism, energy and banking, it is stated by the Montenegrin Government.

The Prime Minister said that there are numerous potentials and opportunities for foreign investment, adding that Montenegro is interested in the opening of direct airline connections with Luxembourg, which would be significant both for potential investors and Montenegrin citizens who live there.

Noting that Montenegro can be proud of the achievements so far, Asselborn said that Luxembourg will continue to support our country in the integration process. Both officials noted the importance of the European perspective for the Western Balkans because it is primarily a question of stability and security in the region.

Prime Minister briefed Minister Asselborn about the progress in the European integration process, expressing hope that Montenegro will become a full member of NATO by the end of May. He said that the membership in NATO means a challenge for our country, due to the desire to contribute to global peace and stability, as well as the opportunity for faster and better valorisation of resources.

Rama: We are ready to have face to face meeting with opposition