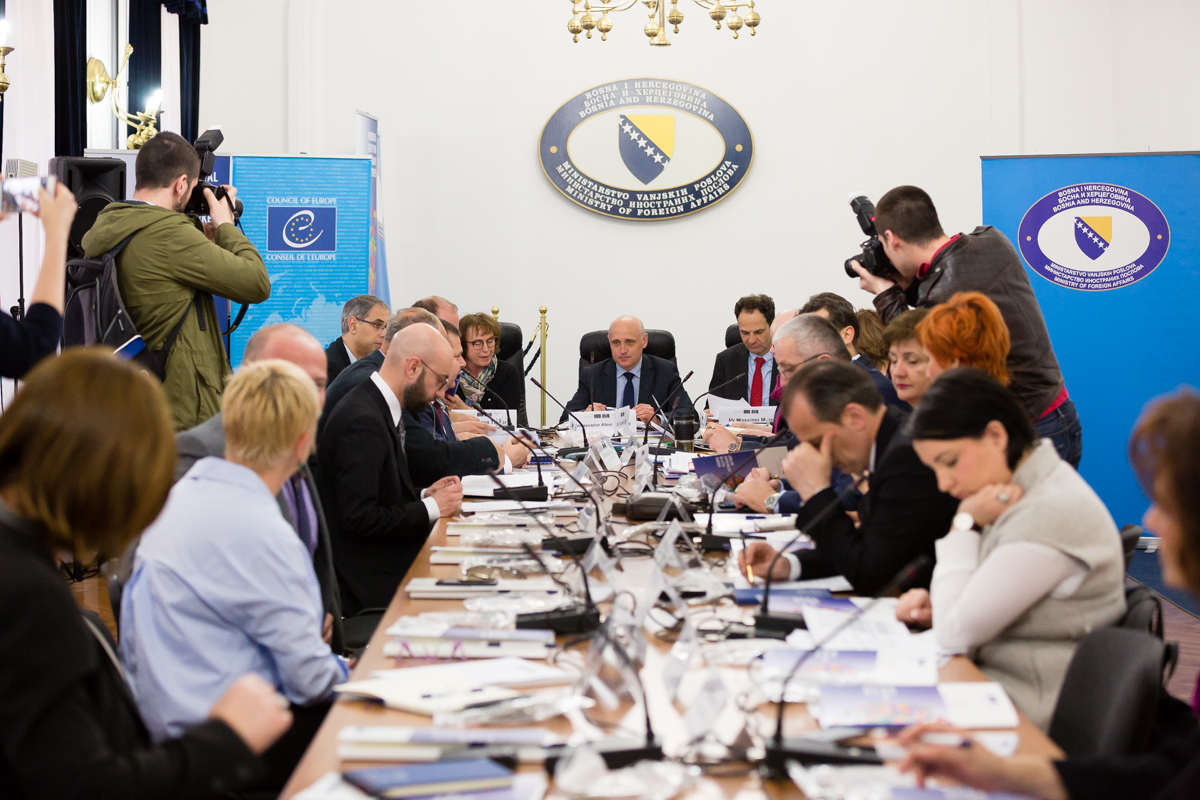 SARAJEVO – First meeting of the European Union and Council of Europe joint programme “Horizontal Facility for the Western Balkans and Turkey” reviewed yesterday in Sarajevo the initial results of the implementation and discussed guidelines for future activities.

The three-year Horizontal Facility (May 2016 – May 2019) aims to assist authorities in South-East Europe to achieve greater compliance with European standards in three key areas: ensuring justice, fighting economic crime as well as combating discrimination and protecting the rights of vulnerable groups. The Horizontal Facility has a budget of 25 million euros, of which 20 million euros has been provided by the European Union and 5 million euros by the Council of Europe. In Bosnia and Herzegovina, 1.82 million euro are allocated for three projects: Enhancing human rights protection for detained and sentenced persons; Strengthening the Human Rights Ombudsman to fight discrimination; and Support to the IMO in the final assessment of the census process in BiH.

Almir Šahović, Assistant Minister for the Multilateral Affairs of the BiH Ministry of Foreign Affairs, pointed to the importance of this collaboration between the European Union, Council of Europe and the national authorities in bringing the country closer to European standards, especially in the context of the application of Bosnia and Herzegovina for the European Union membership.

Meeting was attended by officials from the Ministries of Justice at state and entity level, the BiH Ministry of Human Rights and Refugees, the Centers for Education of Judges and Prosecutors, as well as representatives of the BiH Ministry of Foreign Affairs, the Directorate of European Integration, the Delegation of the European Union and the Council of Europe.

Massimo Mina, acting Head of Co-operation of the Delegation of the European Union, underlined the importance of this programme for enhancing the capacities of the institutions involved in the protection of human rights and fighting discrimination which are the values at the heart of the European integration process. Verena Taylor, Director of the Office of Directorate General of Programmes of the Council of Europe, stressed that the results of the programme would depend on the engagement and commitment of the beneficiaries. Therefore she encouraged the authorities involved in the implementation of the joint programme to take full advantage of the available assistance in meeting the Council of Europe standards and European Union acquis.

The Horizontal Facility relies on the Council of Europe’s unique working methods, whereby tailor-made technical co-operation activities are based on conclusions and recommendations of the Council of Europe’s monitoring bodies. They highlight areas where improvements are needed in legislation and policies of the beneficiaries to comply with the Organisation’s treaties and other standards.

Simović, Erjavec: Euro-Atlantic integration is pillar of stability and prosperity

Kocijančić on the decision by the SDSM: Every party is responsible for its actions