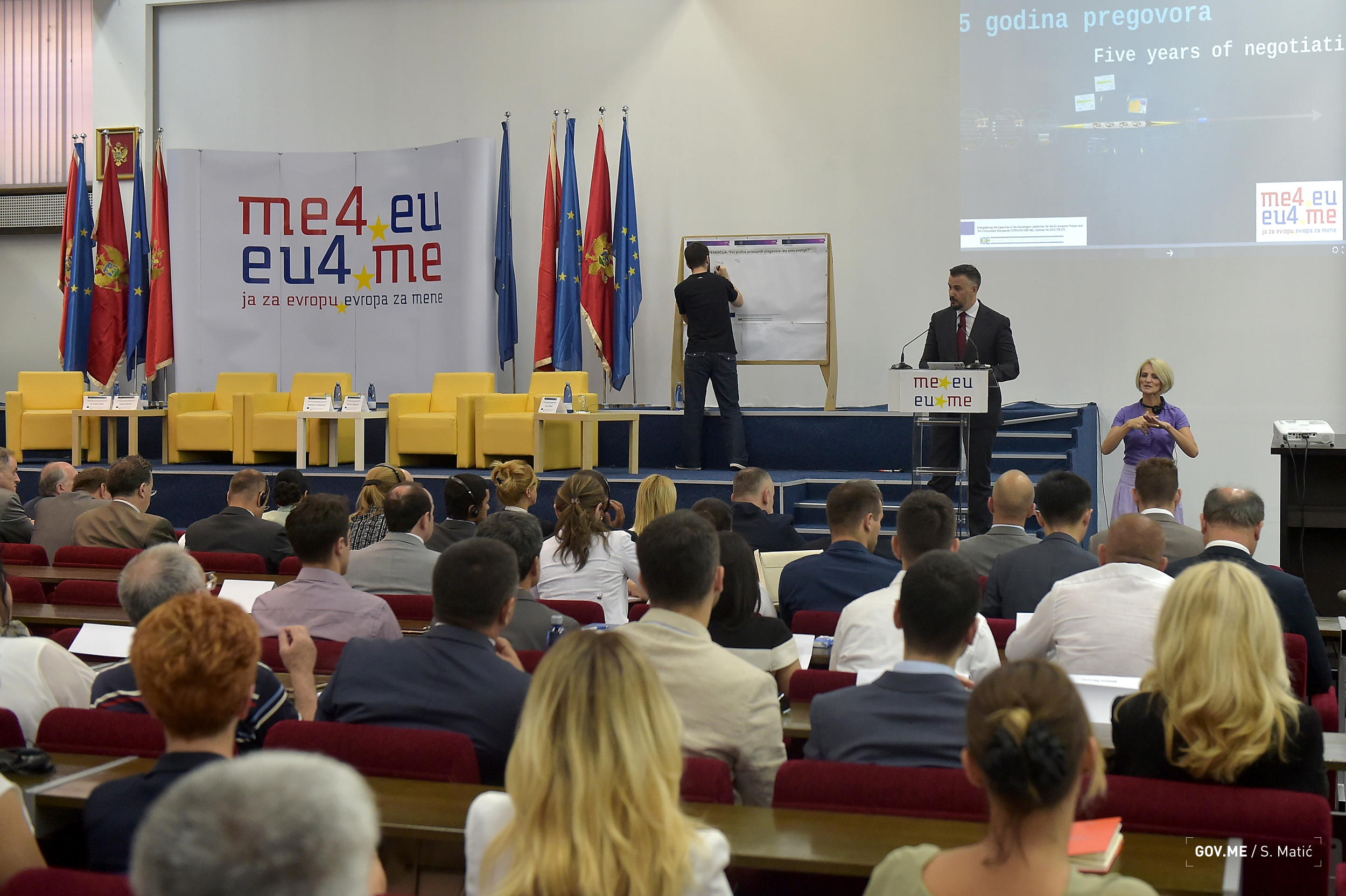 Conference "Five years of accession negotiations – what we have accomplished"; Photo: Montenegrin Ministry of European Affairs

The conference was opened by the Minister of European Affairs of Montenegro Aleksandar Andrija Pejović and the Head of the EU Delegation to Montenegro Aivo Orav.

Minister Pejović pointed out that the number of people and institutions involved in the negotiations is the best indicator of the scope of the process and how significant it is for Montenegro. He also mentioned that the last five years were for Montenegro a period of important and fundamental changes thanks to which we made an enormous step forward.

“I am certain that in these five years we significantly strengthened fundamental rights, improved conditions for education and mobility, ensured better quality of products and services and greater safety of citizens, established better standards for the development of economy, created better conditions for national producers, safer transport, better energy supply, healthier and preserved environment” said the Minister.

Speaking on the new context and approach by which Montenegro negotiates, the Minister indicated that we were no longer negotiating on mere transposition of the acquis and drafting of laws, we also proved on that day that the system was already producing results in practice, and that took time. ’’As the country of the region that is closest to the membership and in that segment a leader in the region, our role is even more demanding and responsible, both towards our citizens and towards our neighbours and European partners. But, with its resoluteness and commitment, Montenegro is proving worthy of this historic task.’’, Minister Pejović stated.

Ambassador Orav stated that the enlargement process brought a new force to the European Union and helped in promotion of quality of life in acceding countries. He pointed out that the EU was looking forward to the common future with Montenegro. ‘’Stable progress achieved by the country in the enlargement negotiations proves that committed work is rewarding and that reforms guarantee that the process will be continued.’’, Ambassador stated.

He also pointed out that the EU, its acquis, and the enlargement policy have evolved over time, and that consequently the process has become more demanding than in the previous rounds of enlargement, but that it continues to be driven by the own merit principle.

On the panel entitled: “Reform Results – View from a Different Angle”, representatives of the European Commission, non-governmental organisations, academia, and business community exchanged their views on the results achieved by Montenegro in the five years of accession negotiations, as well as on the upcoming obligations and challenges on the path towards the full EU membership. The panel included: Thomas Hagleitner, Acting Head of the Unit for Montenegro in the Directorate-General for Neighbourhood and Enlargement Negotiations, Jovana Marović, Executive Director of NGO Politikon, Svetlana Vuksanović, President of the Montenegrin Employers Federation, and PhD Aneta Spaić, Professor at the Faculty of Law.

The conference was organised in cooperation with the Technical Assistance Project “Strengthening the capacities of the Montenegrin authorities for the EU accession process and IPA II instrument” funded by the European Union.

Vucic, Scott discuss topics of upcoming visit to US

Orav: Due to the recent threats made against myself, Hahn and Vanhoutte, we’ve had to increase security

Mogherini and Hahn: Agreements reached in BiH are welcome news