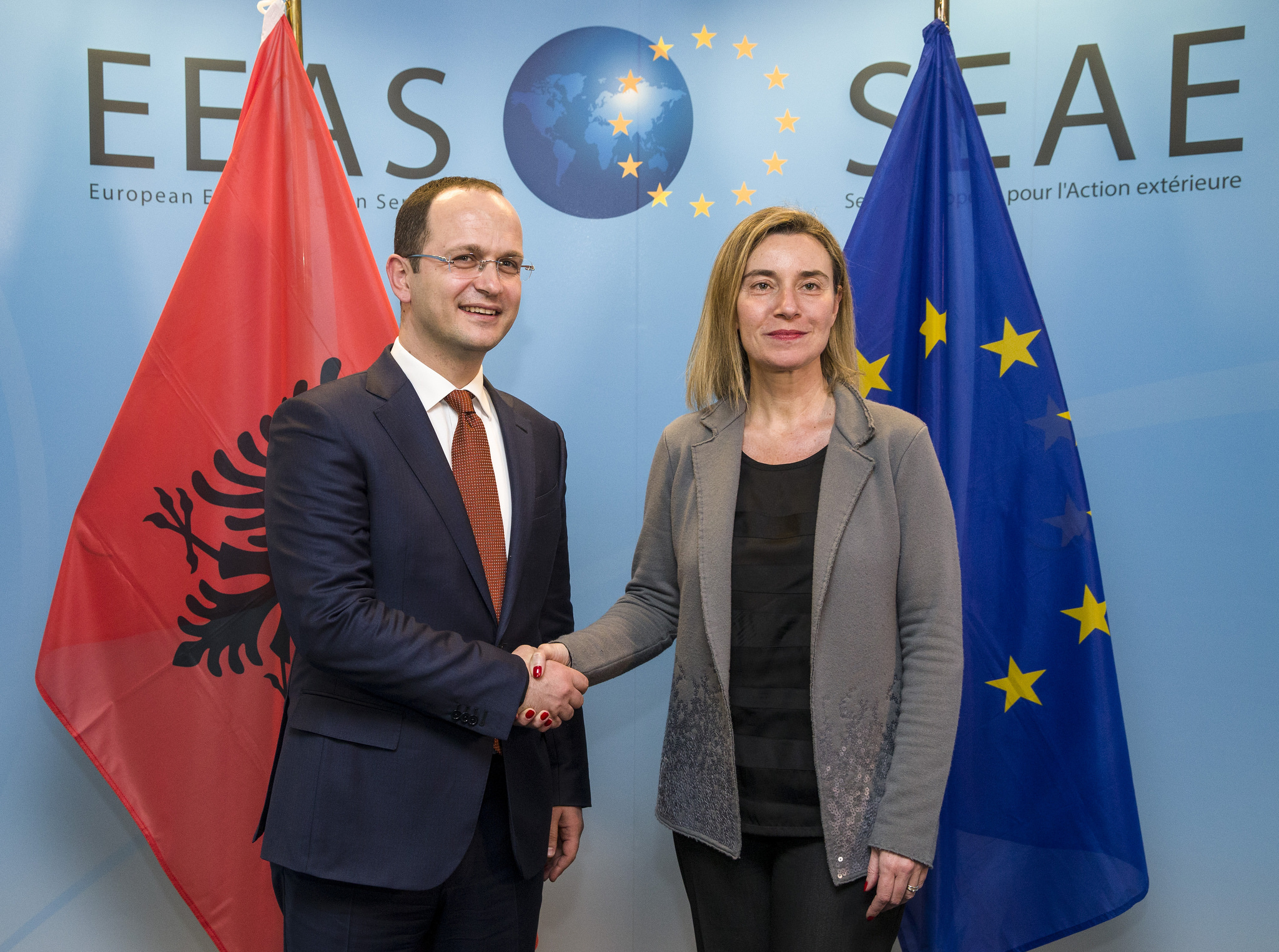 BRUSSELS – During the second day of his visit to Brussels, Minister Bushati met with High Representative for Foreign Affairs and Security Policy of the EU, Federica Mogherini and Commissioner for European Neighborhood Policy and Enlargement Negotiations, Johannes Hahn.

During the meeting with Mrs. Mogherini, Minister Bushati informed her on the progress of state-building reforms in Albania and the government’s work in addressing the 5 key priorities. The commitment of the Albanian Government to conclude the judicial reform, as well as its direct effect not only in areas related to the rule of law, but also in reforms aiming at improving the business climate and the rule of law in economy, were at the focus of this meeting.

Mrs. Mogherini expressed support for the state-building efforts in Albania, highlighted the contribution of these reforms to a dynamic, efficient process on the country’s European path and praised the commitment to firmly pursue with the conclusion of the judicial reform. Moreover, she praised the proactive and constructive role of Albania in the region, as well as its foreign policy’s full alignment with that of the EU.

With regard to regional cooperation, Minister Bushati underlined that “efforts among Western Balkan countries highlight the need for financial support and commitment on part of the EU, in order to consolidate sustainable development and meet the commitments within the framework of the Berlin process.”

Focusing on security challenges and the refugee crisis currently facing the EU and Western Balkan countries, they highlighted the need that such times be used to ensure the progress of modernization and democratic state-building processes in our region.

During the meeting with the Commissioner for European Neighborhood Policy and Enlargement Negotiations, Johannes Hahn, Minister Bushati emphasized the importance of the EU enlargement policy on the reforms’ progress, not only in Albania but also in other countries of the region, as a geostrategic and political project. He noted that the EU enlargement policy is an instrument that promotes modernization, democratization and stability among countries of the region.

After informing Commissioner Hahn on the reforms’ progress in Albania, mainly in the rule of law, Minister Bushati reiterated the readiness of the country to move towards a new phase, that of opening accession negotiations.

Commissioner Hahn praised the stabilizing and dynamic role of Albania in the region and expressed confidence that commitments undertaken in the framework of the Berlin Process will provide a better interconnection for Balkan countries. In the framework of the integration agenda, Commissioner Hahn will visit Tirana at the end of March, for the next meeting of the High Level Dialogue between Albania and the EU. Also, he will take part in the meeting of Foreign Ministers of the Western Balkan countries which will be organized in Tirana, on our country’s initiative.

Kocijančič: All must respect principles of reconciliation