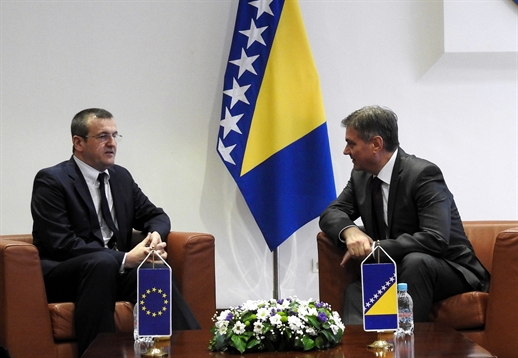 The main topic of the discussion was Preda’s actual report on BiH in the EP upon which the resolution on BiH is going to be made.

The interpretation of the term “federalization” as a further disintegration of Bosnia and Herzegovina on an ethnic basis is unacceptable, said Zvizdić. He emphasised that there will be no centralization, unitarisation, or federalism within BiH.

Dan Preda said that investing large number of amendments on Resolution on BiH demonstrated interest of European Parliamentarians for BiH. He congratulated Zvizdić on so far implemented reforms because “last year was a very good year from the standpoint of economic and social reforms“. BiH will have the support of the European Parliament regarding this.

He also emphasised that it is important to offer quality answers to the EP’s Questionnaire because it is an opportunity for a very clear look at the situation in Bosnia and Herzegovina.

He called once again for establishing a Joint Parliamentary Committee in the context of the Stabilisation and Association Agreement (SAA) that would be a very important body for dialogue between BiH and European parliamentarians.

While congratulating on the achieved results in enforcing the Reform Agenda, Preda was interested in the future steps of the government of FBiH in enforcing this document as well as the general path toward the Euro-Atlantic integrations.

Beside all the deadlocks we are still successfully enforcing scheduled reforms, said the Prime Minister of FBiH, stressing that all of the laws within the Reform Agenda have been adopted to date, and that the adoption of the most important one, law on PIO (Pension and Disability Insurance Fund) that is crucial in the reform of the social system, lies ahead.

Novalić stated that the year ahead holds adoption of three or four very important legislative acts such as the law on contribution fees, on forests, on bankruptcy proceedings, on commercial courts…, while continuing toreform the public administration and civil service.

Rapporteur of the EP Preda, was especially interested in cooperation between the governments of the two entities and the results of the last meeting with President of the Government of Republika Srpska, Željka Cvijanović, meeting that was evaluated as successful by the Prime Minister Novalić.

Talking about the process of answering the EU Questionnaire at entity and canton levels, Prime Minister Novalić said that everything is going to the scheduled plan.