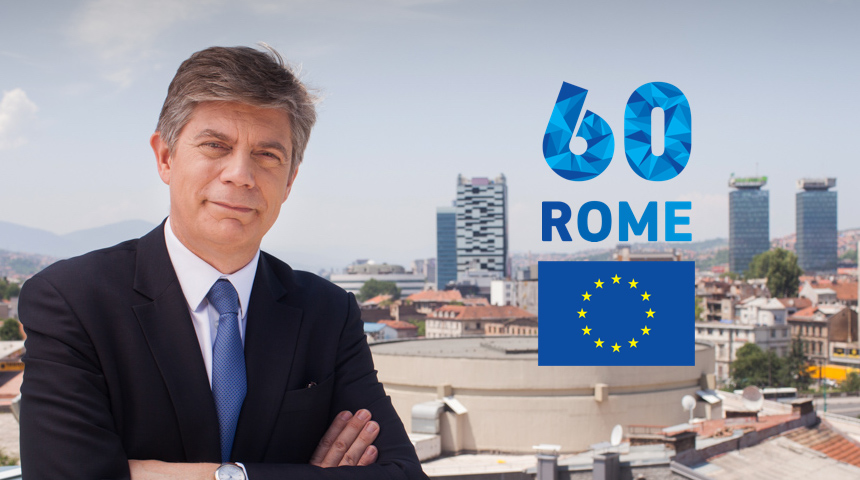 SARAJEVO – On the occasion of 60th anniversary of the Rome Treaties Lars-Gunnar Wigemark the Head of the EU Delegation to Bosnia and Herzegovina wrote an op-ed.

On 25th March the European Union will mark 60 years since the signature of the Rome Treaties, the first step towards a united Europe. Since the birth of the European Communities in 1957, the citizens of our Member States have enjoyed six decades of unprecedented peace, prosperity and security. The contrast to the first half of the 20th Century could not be greater. Two catastrophic wars in Europe between 1914 and 1945 left millions dead, and a continent devastated, divided and prostrate. For countries that had long been at war, European integration has been the most successful peace project in our history.

However, we are living in unpredictable times and the 60th anniversary of the Rome Treaties is the opportunity not only to reaffirm our commitment to the values and objectives on which the European project is founded but also to take pragmatic and ambitious steps forward.

Bosnia and Herzegovina is the most recent European country to apply for membership in the European Union, demonstrating how the need for a united European continent remains strong. The future of BiH is undoubtedly in the European Union, and we will continue to work with the authorities, civil society, media and citizens of this country to realize your aspirations to join the EU family. We do so in the firm belief that the transformation necessary for BiH to become a member of the European Union will bring real improvements in the lives of this country’s citizens.

The world is going through a time of great uncertainty: the global balance of power is shifting and the foundations of a rules-based international order are too often being questioned. The European Union will be an increasingly vital power to preserve and strengthen the global order.

The EU is the second global economy. We are the largest global market and the leading foreign investor in most parts of the globe. The EU has achieved a strong position by acting together with one voice on the global stage, by playing a key role in removing barriers to trade as a member of the World Trade Organization, as well as concluding bilateral trade deals with many important partners around the world – such as the recent CETA deal with Canada. This allowed EU exporting firms to flourish and create over 30 million jobs.

We invest more in development cooperation and humanitarian aid than the rest of the world combined. The EU is increasingly active as a global security provider.

The European Union is and will continue to be a strong, cooperative and reliable power. Our partners know what we stand for.

We stand for multilateralism, for human rights, for international cooperation.

We stand for sustainable development, inclusive societies, the fight against all inequalities – in education, in democracy and human rights. For us, this is not charity: it is also a smart investment in our own security and prosperity.

The European Union is the world’s largest financial donor of development aid. We were instrumental in planning the UN Sustainable Development Goals and are already implementing them as well as working to update the European Consensus on Development Policy. EU development aid goes to around 150 countries in the world and increasingly focuses on the poorest places in the world. In the period 2014-2020, about 75% of EU support will go to countries which are often hard hit by natural disasters or conflict, something that makes their citizens particularly vulnerable. The EU is the only donor worldwide which gives support in all countries that are fragile or suffer from conflict.

We stand for better global rules, rules that protect people against abuse, rules that expand rights and raise standards. It is thanks to our engagement – the Union together with its Member States –that the global community has set up innovative agreements like the Sustainable Development Goals, the Paris Agreement on Climate Change and the Addis Ababa Action Agenda on Financing for Development. In a world of re-emerging power politics, the European Union will have an even more significant role to play.

A more fragile international environment calls for greater engagement, not for retrenchment. This is why the EU will continue to support and help the United Nations: our cooperation with the UN covers peace missions, diplomatic efforts, human rights, tackling hunger and fighting criminality. The European Union is also a strong and active partner of regional organisations like the Africa Union, the Association of Southeast Asian Nations and the Arctic Council.

The European Union also stands ready to help those affected by natural and man-made disasters. Humanitarian crises continue to take a heavy toll internationally, and in 2016 the EU allocated relief assistance of over €1.5 billion for food, shelter, protection and healthcare to 120 million people in over 80 countries. The EU has been, since the start of the Syrian conflict in 2011, the largest single donor of humanitarian aid to care for the millions of men, women and children displaced by the conflict. Any country in the world can call on the EU Civil Protection Mechanism for help. Since its launch in 2001, it has intervened in some of the most devastating disasters the world has faced, like the earthquake in Haiti (2010), the triple-disaster in Japan (2011), the floods in Serbia and Bosnia and Herzegovina (2014), the Ebola outbreak (2014), the conflict in Ukraine (2014), the earthquake in Nepal (2015), the refugee crisis in Europe, and Hurricane Matthew in Haiti (2016).

Whatever events may bring in the future, one thing is certain: the EU will continue to put promoting international peace and security, development cooperation, human rights and responding to humanitarian crises at the heart of its foreign and security policies.