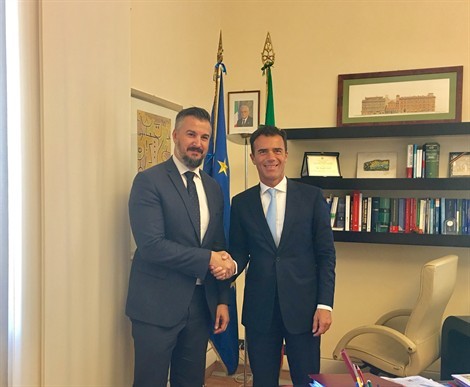 ROME – Minister of European Affairs Aleksandar Andrija Pejović met Wednesday with Deputy Prime Minister for European Affairs of Italy Sandro Gozi in Rome. NATO accession and the good dynamics of progress towards membership in the EU are the result of excellent reform activities undertaken by Montenegro since restoration of independence; it was rated at the meeting, Government of Montenegro stated.
DPM Gozi congratulated on the results, pointing out that the Republic of Italy, in line with the traditionally good and friendly relations fostered by the two states, will continue to provide full support to the internal efforts and Montenegro’s fulfilment of foreign policy goals. He said that the upcoming Summit in Trieste will promote unequivocal political support to the countries of the region on their European path, decisions on financial support to projects that have national and regional significance and further networking of the countries of the region with the European Union market in the field of energy and traffic.

Minister Pejović thanked for the support of the Republic of Italy, which is a great advocate of the EU enlargement policy in the Western Balkans. He said that the Montenegrin society, through the integration processes, significantly adopted the value system of the European community. The Minister conveyed Montenegro’s readiness for full cooperation in the context of the Berlin Process.

The meeting with the Italian Senate’s chairman Vanino Kiti and members of the European Policy Committee in the Italian Senate was an opportunity to present the results achieved in the process of European integration, as well as to exchange views on the policy of enlargement and the dynamics of the opening and closing of the negotiating chapters.

Addressing the members of the Committee, Minister Pejović stressed that Montenegro, through the implementation of reforms, has made progress in all chapters, but that special attention is paid to the rule of law by meeting the provisional criteria in Chapters 23 and 24. The Minister expressed the expectation that during this year could begin preparations for obtaining the final benchmarks and to enter the new phase of the negotiation process. He expressed the belief that enlargement policy will remain high on its agenda, highlighting its importance both for the credibility of the European project and for the long-term stability and prosperity of our region.

Senator Vanino Kiti emphasised that, with the commitment to the process of strengthening the EU, the continuation of enlargement policy through the accession of all Balkan states to the community of European nations is in the focus of Italy and its foreign policy.