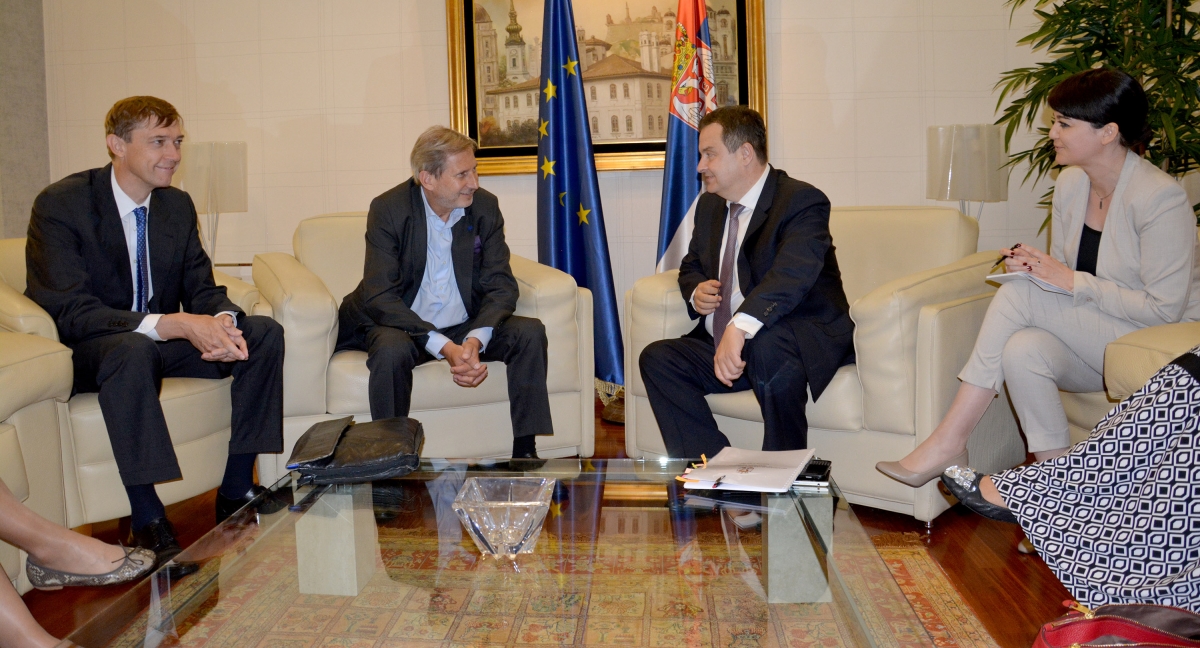 Johannes Hahn and Ivica Dačić at the meeting; Photo: Ministry of Foreign Affairs of Serbia

BELGRADE – Serbian Acting Prime Minister and Minister of Foreign Affairs Ivica Dačić met Thursday, on the eve of his bilateral visit to Spain, with European Commissioner for Neighbourhood Policy and Enlargement Negotiations Johannes Hahn, who was on a working visit to Serbia, Government of Serbia stated.

Dačić said on that occasion that the goal of Serbia and the Western Balkans is to enter the EU, adding that this can be achieved only by big steps forward, and not by inflammatory statements that put the region back into the past.

At the same time he stressed the importance of opening negotiating chapters with the aim of continuing the dynamics and continuity in the progress towards European integration.

According to him, one of the foreign policy priorities of our country is stability in the region, where Serbia will invest maximum efforts to give its constructive role in making the Balkans a zone of stability and peace.

The two officials agreed that Serbia is on the right track, and that it is necessary to compensate for what was lost in the past.

Dačić stressed that Serbia will do everything to contribute to the continuation of dialogue with Pristina, but that it also expects Pristina to fulfil what is the most important for Serbia, and that is the formation of the Community of Serbian municipalities.

Hahn said he expects that two new chapters in negotiations on Serbia’s membership in the EU will be opened this month, and stressed that this process will continue in the second half of the year.

The European Commissioner underlined that the aim of his visit to Serbia is to show the citizens concrete results of the European integration process, since citizens are becoming a bit tired of tusual outcomes and conclusions of summits.

Hahn stressed that the progress in dialogue between Belgrade and Pristina is a precondition for the prospects of joining the European Union, and expressed hope that Pristina will confirm its commitment to that process, since dialogue has no alternative.

He reiterated that President of the Republic of Serbia Aleksandar Vucic showed that he is committed to dialogue and that is what the EU expects from Pristina, as this is a prerequisite for the entry into the EU.

Dačić and Hahn noted that dialogue must lead to concrete results, despite a difficult past, due to the fact that for both sides it is important to have a successful and constructive dialogue.