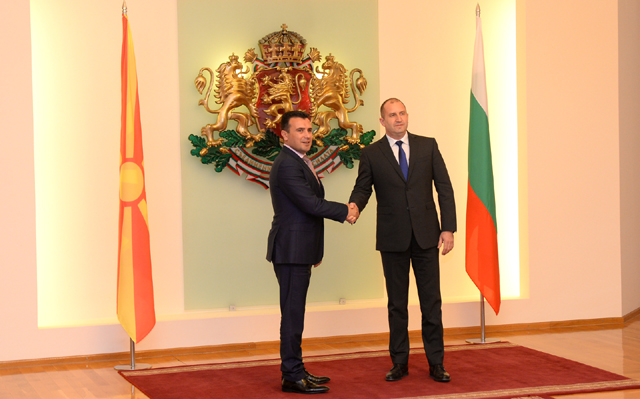 The Bulgarian President said in the new reform-oriented government in Macedonia he recognized opportunities to strengthen the cooperation between Macedonia and Bulgaria. At the same time, he voiced support to the Euro-integration aspirations of Macedonia.

“The government of Macedonia by implementing reforms and developing good-neighborly ties is strongly committed to paving the way for Macedonia towards its strategic goals, EU and NATO accession. The Republic of Macedonia and the Republic of Bulgaria share the same vision about the region, integration into European and Euro-Atlantic structures. I’m glad that there is awareness and accountability on both sides for making progress. I expect our neighbor, Bulgaria, to support our European perspective after taking over the EU chairmanship in January 2018,” said PM Zaev.

President Radev said Macedonia’s prosperity was deemed crucial for the Balkan region and for the EU, because it ‘demonstrates the positive effects of EU integration.’

Both Zaev and Radev concurred that ‘a heartfelt and genuine mutual respect and trust and mature policies of openness towards each other can pave the way for cooperation at political level, but also in many other important areas for the citizens of the two countries.’

Macedonia, PM Zaev said, is interested in opening new border crossings. Also, ways to cooperate in the sphere of infrastructure, trade and culture were discussed.

After meeting with the Bulgarian President, Zaev visited the Archaeological Museum of Bulgaria.