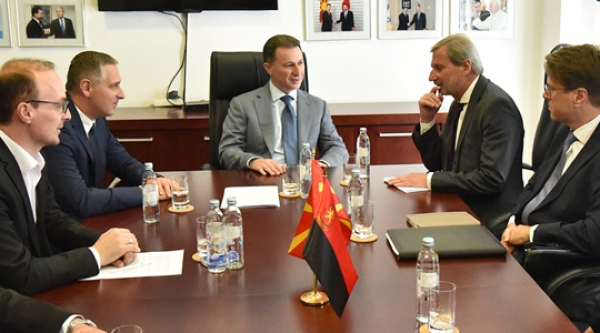 SKOPJE – The activities that refer to the integration processes should be implemented and VMRO-DPMNE will support all the reforms that it will mark as of interest of the citizens, stressed the leader of the VMRO-DPMNE, Nikola Gruevski during a meeting with the European Commissioner for European Neighbourhood Policy and Enlargement Negotiations, Johannes Hahn, Meta reports.

Gruevski, as announced by VMRO-DPMNE, at the meeting has stressed that the goal of the Government led by SDSM shouldn’t be just receiving a positive report, such as the ones that Macedonia had before the political crisis, but a positive recommendation for starting the talks for an EU membership.

A member of the Hahn’s team, Kyriacos Charalambous, regarding the meeting wrote a comment on his Twitter account that the EU  Commissioner has “encouraged Gruevski to contribute to the EU-reforms since the support of his party is needed especially when it comes to bilateral relations with the neighbors.”