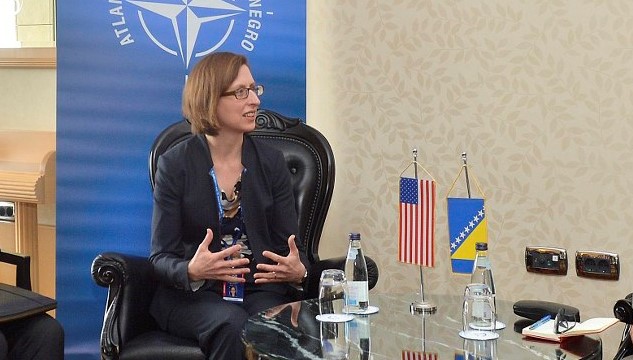 PODGORICA – The US State Department’s Deputy Assistant Secretary of Defence Laura Cooper said that Montenegro could expect continued support from and presence of the USA in the region. However, she said it was no longer just support but a partnership, since Montenegro was now USA’s NATO ally.

“The fact that the Vice President Mike Pence has recently visited Montenegro sends a strong message of the US support to the region and its solidarity with Montenegro as a NATO ally,” Cooper said in an interview with Pobjeda.

Commenting on the Moscow’s meddling in both US and Montenegro’s elections, Cooper called to mind that the US intelligence service announced a clear report which identified cyber-attacks and meddling into the elections in America.

“It is something repeatedly seen across Europe through media speculations, fake news and cyber-attacks,” she said adding that the good thing was the fact that the awareness of the threats was raised, as well as the ability to fight them.

However, she believes the trends are not good when it comes to Russia’s wish to interfere in the internal affairs of democratic societies across Western Europe and the USA.

“It is not only a matter of Montenegro – it is a matter of Russia’s perception of its role in the West and the things it chooses to do when it comes to interfering in internal affairs of democratic countries. The NATO alliance has opted for a strong response in order to prevent those threats and defend ourselves from Russia’s meddling and aggression. Montenegro, as a part of NATO, will be a part of that strong response,” Cooper said.

She pointed out that Montenegro had a very solid plan of reaching the 2% budget allocation for defence by 2024.

Cooper also said that Montenegrin soldiers’ capabilities exceeded their category. She added that Montenegro, as a NATO member, would be a part of the strong response to Russia’s undesirable and destabilising activities.

Ivanov: EU’s failure in the Balkans is used by Russia and China