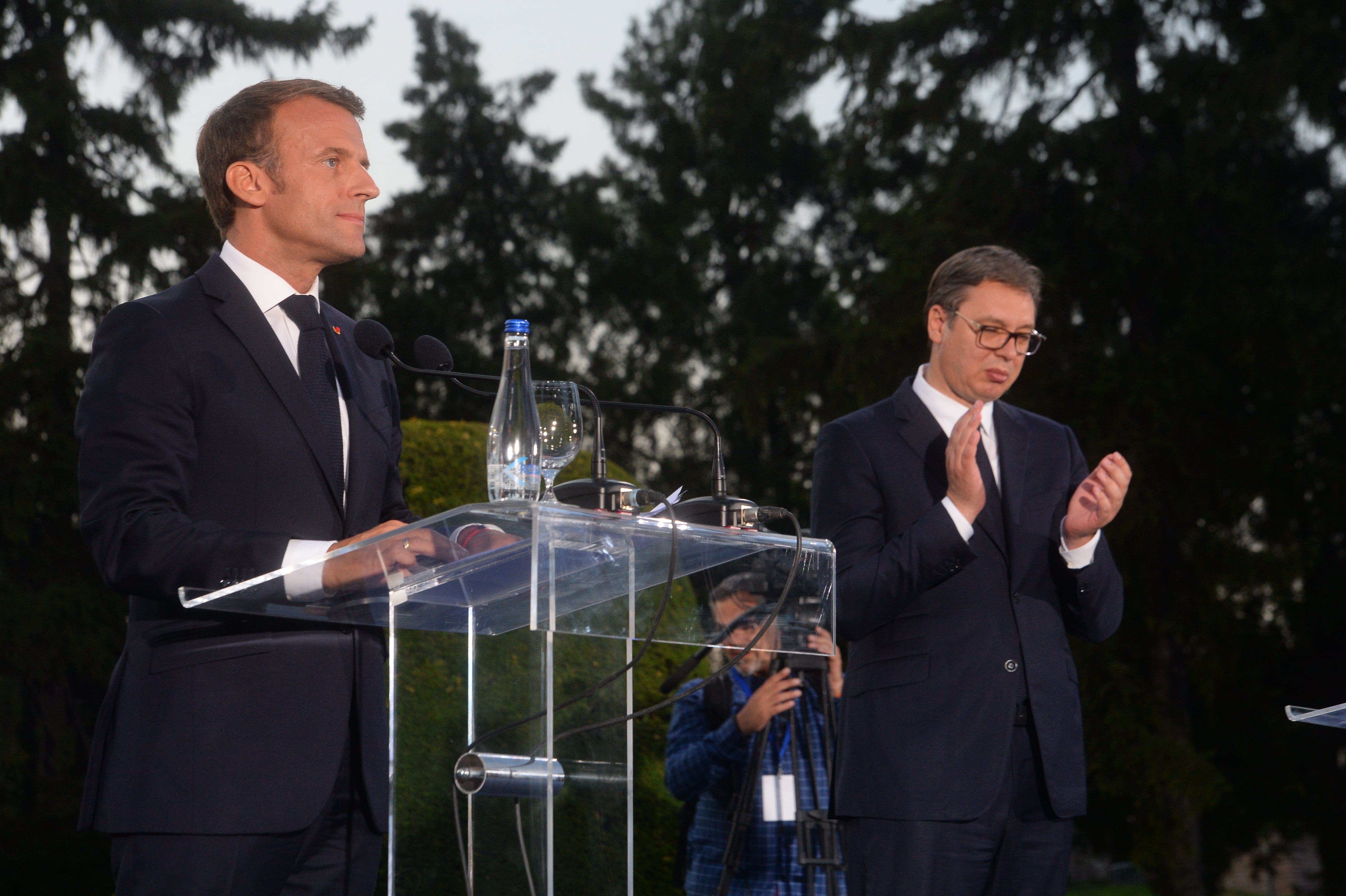 Macron and Vučić in Belgrade on 15 July 2019; Photo: Presidency of Serbia

BELGRADE – The EU needs to reform itself in parallel to the reforms in Serbia in order to be ready to accept its membership, said the French President Emanuel Macron, thereby once again sharing his well-known view on this matter, at yesterday’s press conference in the context of his two-day visit to Serbia.

At a press conference held after a long one-to-one meeting between Macron and President Vučić, the two discussed their countries’ bilateral relations and the process of normalisation of relations with Kosovo, in the context of which President Macron announced a new meeting in France.

The European perspective of Serbia was also discussed.

“I have a sincere position – the EU does not function well with 28 member states, and we need to reform ourselves in order to make decisions faster, which is compatible with the Serbian approach to the EU“, Macron said, adding that the fact that a certain date hasn’t been set shows responsibility, and that it is already accepted that Serbia will become a member when it is ready.

According to the French President, there shouldn’t be any timetables. The EU accession process consist of a series of reforms, and this stage will be completed only when everything is implemented.

Among the reforms, the interlocutors mentioned ones in the field of economics, the rule of law an structural changes. When asked about the new list of the unsatisfactory ratings presented in this year’s European Commission Report on the state of the rule of law, freedom of the media, and independence of the judiciary, Macron said that all issues were openly discussed.

“In each area in which there are no satisfactory ratings, there needs to be improvement, and there is a desire for improvement among our interlocutors,” Macron said, adding that some additional work needs to be done regarding media freedom and the cooperation with Reporters Without Borders.

Following the press conference, the Presidents visited sites of the First World War memorials, reflecting on the history of alliances and cooperation between Serbia and France. Multiple cooperation agreements were signed as well.

Normalisation of relations with Kosovo: Defending national interests does not mean turning one’s back to a compromise

Commenting the meeting held in Berlin in late April, President Macron said that France, alongside Germany, will be ready to support the renewal of the dialogue.

“That’s what I do because I have faith in Europe, and whoever believes in Europe can not believe in the fatality of permanent conflicts,” Macron said.

A meeting between the authorities in Belgrade and Pristina, together with the head of the French state and the German Chancellor, was due to take place on 1 July, but it was postponed. Macron expressed his willingness to attend it when the circumstances allow so.

“We need to convey the idea that the defense of national interests is not to turn back on the compromise. I think it is our responsibility to give you support in order to find an agreement and achieve stability in the region,” he concluded, emphasising that, at the moment, he does not know what the answer to the question of mutual relations is, but that he will do his best to find it.

President Vučić thanked his French counterpart for the support, arguing that there are few world leaders who are willing to listen to Serbia, despite disagreeing with it.

“I’m not naïve to think that President Macron will change his stance, but I prayed for help in finding a compromised solution. We must accept that there are countries that differ vastly, and this is one of the few leaders, besides Angela Merkel, who wanted to hear us and help us out,” Vučić emphasized.