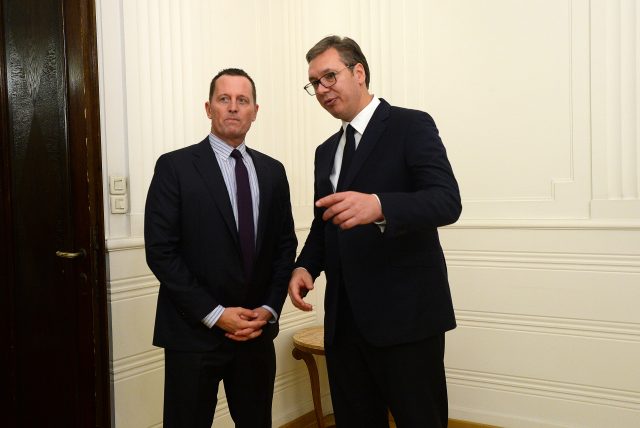 BELGRADE – Pristina and Belgrade will need to cooperate closely and promptly with a look towards the future, said Richard Grenell, President Donald Trump’s Special Envoy for Belgrade-Pristina dialogue, at the meeting with the President of Serbia Aleksandar Vučić, press release of the Office of President of Serbia emphasises.

„Trump administration is convinced that the economic development, jobs and increased trade opportunities are a key part of ensuring lasting peace,“ Grenell said.

He stressed that the goal is to bring US partners, Serbia and Kosovo, to comprehensive solution for resolving conflicts in the region.

As Bloomberg reported, US envoy for Kosovo was given a full mandate by President Donald Trump to achieve an agreement between Kosovo and neighbour Serbia as soon as possible.

„Grenell said the dispute between the two neighbours was an urgent case that needed to be resolved within months,“ Bloomberg writes.

According to Bloomberg, the US envoy’s trip could mark a change of tack – the EU has lead the mediation between the former wartime foes for years.

Yesterday, after the meeting with President Hashim Thaçi, Grenell expressed hope that Kosovo and Serbia will meet soon and find solution for their relations.

First EP-mediated dialogue in Serbia: Part of the opposition refuses to participate