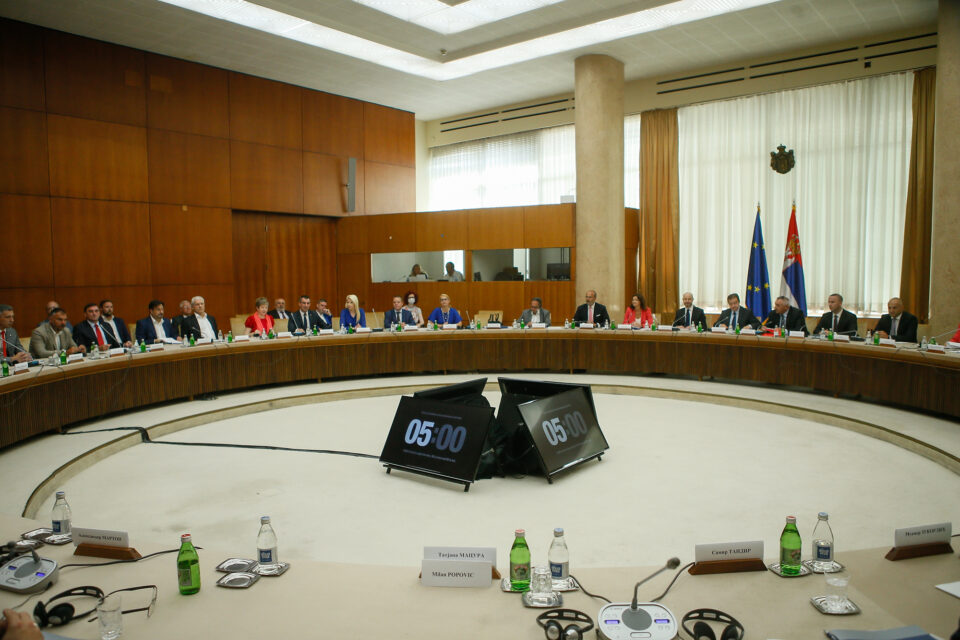 Facilitators and participants of the IPD, July 2021; Photo: EU Delegation to Serbia

BELGRADE – The first live round of the Inter-Party Dialogue in Serbia facilitated by the European Parliament since 2019 took place on 9 and 10 July. The facilitators announced that they would submit a proposal for a working document on electoral conditions by 1 September, with the aim of reconvening the IPD on 17 and 18 September. Regular presidential and Belgrade local elections in Serbia are taking place by the spring of 2022.

According to the conclusions of the round, released after the meeting, “the working document will explore possible improvements in the areas of equitable access to media, integrity of the electoral process and ensuring effective oversight mechanisms”. It will include contributions made so far during the Dialogue, and the participants are invited to submit further contributions by 1 August.

The first round of the Inter-Party Dialogue took place in Belgrade on Friday and Saturday, in the presence of the facilitators Tanja Fajon (S&D), Vladimír Bilčík (EPP) and former MEP Knut Fleckenstein. It was chaired by the Speaker of Serbian parliament Ivica Dačić.

The topics of discussion mostly focused on the media in the country, with particular emphasis on the national public broadcaster. The opposition’s primary complaint about the electoral conditions in Serbia in recent years concerns the reporting of the national television channels, which domestic observers Centre for Research, Transparency and Authority (CRTA) and Bureau for Social Research (BIRODI), as well as ODIHR monitoring missions, have found to be significantly biased in favour of the ruling Serbian Progressive Party.

According to the conclusions of the first round, representatives of the public broadcasters and the Regulatory Authority of Electronic Media (REM) will be consulted during the continuation of the process.

The facilitators also renewed their commitment to the integrity of the electoral process, which includes the issues of party financing, role of public officials and election managing bodies, as well as to the effective oversight mechanisms of media reporting, the conclusions read.

Before meeting with the parties on 9 July, facilitators met with President of Serbia and of the ruling Serbian Progressive Party Aleksandar Vučić.

According to the press release, facilitators assessed the dialogue so far as a very constructive one, and informed the President on the next steps. Vučić pointed out that rational and pragmatic solutions that could improve election conditions are welcome, adding that the point of the talks is to hear suggestions from all sides, without conditioning, so as to create an environment of trust in an adequate and constructive fashion, with a serious and responsible approach of all political stakeholders.

“This is the second phase of the dialogue. We are willing to fully contribute to its success and we stand ready to be engaged as long as it takes. We don’t have any deadlines, the dialogue has been taking place since 2019, but we want to achieve results in good time before the elections announced for 2022”, MEP Vladimír Bilčík stated.

Unlike the first phase of the IPD in 2019, when the biggest opposition coalition at the time, Alliance for Serbia, refused to sit at the same table with the ruling parties, almost all relevant ruling and opposition parties participated this time. However, extra-parliamentary opposition was still represented by several groups of parties and movements.

The meetings on 9 and 10 July gathered the representatives of the existing seven parliamentary groups in the National Assembly of Serbia, all but one of which support the current government. The partially boycotted 2020 election left the Serbian parliament without viable opposition.

Opposition parties gathered in three groups – one coalescing around the centre-right People’s Party, the other gathered around Social Democratic Party led by former President Boris Tadić and the third consisting of centre-left Freedom and Justice Party and Democratic Party, liberal Free Citizens Movement and green-leaning Ne da(vi)mo Beograd and Together for Serbia.

In addition, right-wing Dveri and the League of Social Democrats of Vojvodina participated individually.

The representatives of the group around People’s Party expressed dissatisfaction with the outcome of the meeting on social networks, with the former MP Đorđe Vukadinović assessing on Twitter that there had been no progress.

Pavle Grbović, leader of the Free Citizens Movement, stressed that the opposition was united and that the success of the Dialogue will depend upon the motivation of the MEPs, which he “still did not see enough” and Dobrica Veselinović, one of the leaders of the Ne da(vi)mo Beograd movement stated that he was carefully optimistic about the outcome.

“Enough is Enough” (DJB), Democratic Party of Serbia, Movement for the Renewal of the Kingdom of Serbia (POKS) and “Oathkeepers”, a group of right-wing parties rejecting the EP-mediation, did not show up. These parties are participating in a “second lane” of the dialogue launched by the ruling parties earlier this year, which is taking place without mediation.

All of these parties participated in the 2020 election, failing to cross the threshold and their level of cooperativeness with the ruling parties have led to them being labeled “fake opposition” by the parties participating in the EP-mediated dialogue, majority of whom boycotted last year’s elections.

The ongoing political crisis in Serbia

European Parliament’s mediation of the Dialogue on electoral conditions in Serbia was launched in September 2019, following the announcement of the majority of the opposition that it would boycott the forthcoming 2020 elections. The first phase of the Dialogue resulted in a list of commitments of the ruling parties, most of which were implemented, but which had little effect on the conditions in which the June 2020 elections took place.

In its assessment of the elections, ODIHR mission stated that they “were administered efficiently, despite challenges posed by the COVID- 19 pandemic, but dominance of the ruling party, including in the media, was of concern”, also noting that “major TV channels and newspapers promoted the policies of the government and gave it extensive editorial coverage, limiting the diversity of views”.

The elections resulted in a parliament in which 244 out of 250 MPs support the Government, with the ruling Serbian Progressive Party having 180 MPs on its own. With the regular presidential and Belgrade local elections expected in April 2022, President Vučić announced that snap parliamentary elections will also take place by that time, though there is no legal requirement for him to go through with this pledge.

The second phase of the Inter-Party Dialogue was announced immediately after the June 2020 elections, but it took until 1 March 2021 for them to officially begin online, with the facilitators holding individual meetings with the participants for the next three months. The pace of the Dialogue has been criticised by the opposition.

Šuica: Failure to reform the law in compliance with constitution is unthinkable

Albanian National Theatre: EPP criticised for only speaking out against parties outside its ranks