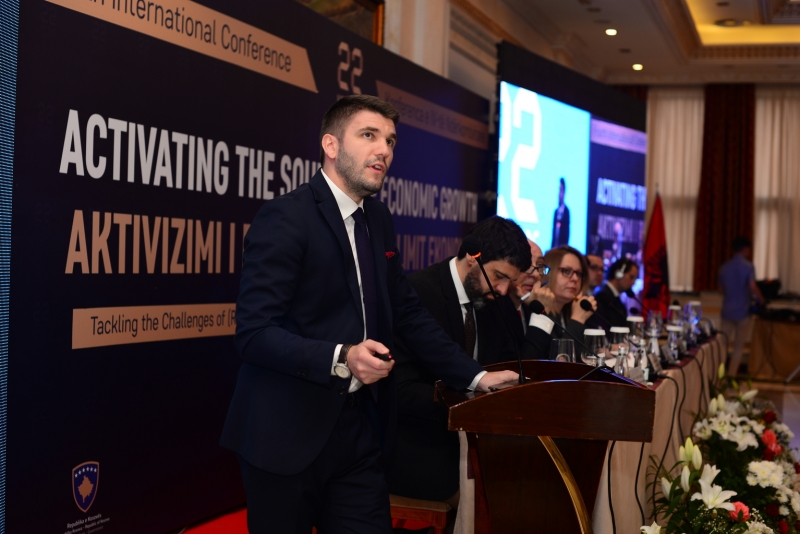 [EWB Interview] Vokrri: Cooperation between Kosovo’s institutions and the international community is crucial for dealing with corruption

For the third year in a row, Kosovo is stagnating in terms of Corruption Perception Index results, published by Transparency International, and corruption remains an obstacle for its democracy. Although there is a solid legal framework focused on combating this problem, its implementation is insufficient. But, the new government elected at the beginning of the year prioritised the fight against corruption.

What are the most important challenges facing the government in the fight against corruption? How important are CSOs in combating this problem, and what are the assessments of the role of the EU and other international actors in this matter? On this and other topics, we spoke with Visar Vokrri, Program Director of Riinvest Institute.

EWB: Challenges of corruption are prevalent in the Western Balkans. According to some reports, citizens of the region believe that corruption is the most crucial problem of the region, after unemployment and low standard of living. Could you single out some of the major causes that made corruption an integral part of society?

Visar Vokrri: Corruption in Kosovo, similar to other countries in the region, remains one of the most pressing issues that is hindering socio-economic development and prosperity. The influence of interest groups over state affairs in the last two decades in Kosovo has led to the capture of state institutions. Therefore, institutional weaknesses remain one of the fundamental causes of corruption in Kosovo. Corruption has become deeply embedded in the way governments operate. Moreover, weak rule of law and poor institutional anti-corruption frameworks has contributed to the prevalence of corruption.

EWB: CSOs represent a crucial component in every democratic society, and their role in preventing and fighting corruption is considered essential. How do you assess the cooperation between CSOs and the state institutions in Kosovo regarding the fight against corruption? Do you think that the existing legal mechanism for their collaboration is sufficient? Do you believe the CSOs are recognized sufficiently as relevant actors in the matters of fighting against corruption?

VV: There are formal mechanisms through which CSOs engage in joining efforts with the government in the fight against corruption. In 2019, the Government of Kosovo approved its strategy for cooperation with civil society, aiming at increasing CSOs participation in policymaking and further strengthening government cooperation with CSOs. Based on this strategic framework, a Government Council for Cooperation with Civil Society was set up and is functional since then.

It should be noted that CSOs in Kosovo play an important role in the democratic debate and the design and implementation of public policy in general, and fight against corruption-related matters in particular. However, further efforts through regular consultations and increased cooperation are crucial in order to broaden the engagement of CSOs.

EWB: Various reports suggest that Kosovo needs to step up its efforts and improve its work on preventing and combating corruption. Can you tell us which areas are the most challenging and require the undivided attention of the authorities? Do you believe there is enough political will to combat these challenges?

VV: Corruptive practices occur regularly in the performance and duties of public officials, but some areas appear to be more vulnerable than others. Regardless of recent developments and progress, public procurement remains the weakest link. However, it seems the incumbent government has the political will to mobilize its institutional capacities and create necessary synergies in combating endemic corruption in the country.

The government has prioritised the fight against corruption through its anti-corruption reform program which is based on the vetting of law enforcement bodies as a prerequisite for strengthening the rule of law in Kosovo.

EWB: There is a solid legal framework in Kosovo to prevent and fight corruption, which has been adopted in line with EU requirements and is derived especially from the action plan of the Stabilization and Association Agreement. Could you tell us, what could be the reasons behind the poor implementation of existing legislation? Do institutions have enough capacity for eliminating corruption?

VV: The main reason for poor implementation of the legal framework on preventing and fighting corruption so far was institutional vulnerability, as a result of undue political influence and limited capacities in combating and eliminating corruption.

EWB: Despite advancements in the legal framework, public procurement remains prone to irregularities and vulnerable to corruption during the procurement process and contract implementation. What should be done to ensure the compliance of practice with the law?

VV: Despite the significant progress achieved in transparency and accountability of public procurement, it is still prone to malpractices and mismanagement of procurement activities.

EWB: After many delays and pressure from the CSOs and international community, Kosovo adopted the Law on the Protection of Whistleblowers in 2018. What is your opinion on this Law and its impact? Do you believe it ensures the necessary protection for the whistleblowers?

VV: The role of the international community, especially the EU, has been instrumental in institutional and capacity development regarding the fight against corruption. Efforts to address corruption have involved many international actors.

For example, to prevent nepotism and establish a meritocracy in senior position employment in public enterprises, and independent agencies, the British Embassy in Kosovo provide assistance to the Government and the Assembly throughout the whole recruitment process.

Similar collaborations between Kosovo institutions and the international community are crucial of importance for a successful joint effort in dealing with the issue of corruption in the public sector in Kosovo.

Hoti: The role of the EU and US in Belgrade-Pristina Dialogue is...

Mogherini, Mustafa: Mitrovica bridge to become symbol of new relationship between the...

Basha: I shall not withdraw from this battle without fulfilling promise I...

Proposal for the Special Envoy for the Western Balkans to be announced...