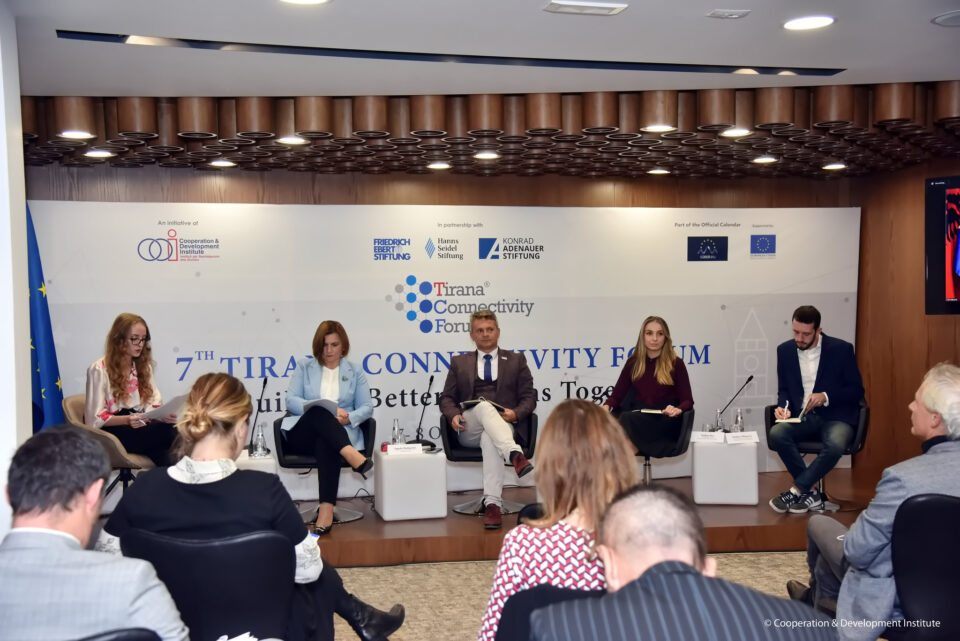 TIRANA – Young people from the Western Balkans region should be informed about the important processes at all levels, including the regional and European level, but also that they should be included as equals in the decision-making processes, it was concluded during the panel „Building Better Balkans Together” at Tirana Connectivity Forum, organized by Cooperation and Development Institute (CDI).

Dafina Peci, Secretary-General of Youth Congress of Albania, said that young people today face a series of problems, ranging from lack of investment to that of their representation in decision-making processes.

“Keeping a national youth structure, a youth council or congress alive is a big job because we lack sustainability; because there have been many challenges on the way to finding proper communication with institutions that we’re unwilling to consult on their policies before making decisions; as well as the fact that we lack legal preparation, lack of experience for constructive dialogue and lack of planned investments for youth“, Peci told.

Peci stressed that Albania has an under-representation of young people in the decision-making process, but also in the private sector.

„I will not say how much the Albanian government has invested over the years in the total budget for youth, because we must keep the conversation in a positive trend, but I must say that 30% of the population consists of young people, as well as 50% of the strength of work. And again we have an under-representation of young people in decision-making processes; in the private sector, in the labor market and an education system that does not meet expectations “, said Dafina Peçi.

The Secretary-General of the Albanian Youth Congress added that the way the media reflects these problems to the public is very important.

Labour Minister from North Macedonia Jagoda Shahpaska, presented the experience of the Republic of North Macedonia in designing and implementing policies aimed at better integration of young people in the labor market.

She especially referred to Macedonian experiences as the first country in the region to establish and implement the „Youth Guarantee“, following the model developed and applied in the countries of the European Union.

“From the beginning of 2018, when we started the Youth Guarantee project until today, we managed to include 66,000 young people in this program. Of these, 20,750 were employed for a period of four months after registration, while 3,350 were involved in active employment measures. These figures show a really successful realization of the Youth Guarantee. On the other hand, we record a significant increase in youth employment, while youth unemployment decreased from 43.2 percent in 2015 to 28.3 percent in the second quarter of 2021. “These figures show that the policies of the Government of the Republic of Northern Macedonia, which refer to the youth, are yielding results,” said Minister Shahpaska.

She stressed the need to intensify regional cooperation in dealing with the challenges faced by young people in all countries in the region, especially in terms of employment, inclusion and sustainable integration in the labor market, building appropriate skills and experience.

Minister Shahpaska said that “a prerequisite for a successful Youth Guarantee is for young people to receive timely and accurate information about the Youth Guarantee, the opportunities that this program offers, as well as the benefits they can have from being included in this program.”

“It is crucial to involve and consult youth organizations from the very beginning, from the moment of creating the program. Involvement of youth organizations and partnership approach, fieldwork is important to reach as many young people as possible,” said Minister Shahpaska.

According to Hani, RYCO supports initiatives of the EU such as the European Investment Plan as a way of long-term thinking about the Western Balkans region.

„We support youth guarantee, it is important that North Macedonia starts with this project and we hope that other Western Balkan countries will accept this concept“, Hani told.

He assesses that youth guarantee could help especially in the reforms of the educational system, which is recognized as one of the biggest problems for all youth in the region.

Do Western Balkans have the preconditions to implement EIP from a youth perspective?

A panel dedicated to youth, during this year’s Tirana Connectivity Forum, was an opportunity to bring together partner youth organizations from the region, gathered around the platform Connecting Youth. As a result of several months of work, this platform has published Position Paper „What’s in for youth in the Economic and Investment Plan for the WB6“.

Youth organizations from the region gave some recommendations for better implementation of EIP flagship projects.

„While EIP Flagship projects promise a lot when it comes to recovery and regional cooperation, on the field we see that through the lenses of youth there is still a lot to be done to ensure inclusiveness, impactful and shorter policy timelines“, says Position Papers.

Connecting Youth is a platform established in 2017 to promote youth connectivity in the region. It is the only initiative of its kind that works as a methodical tool to promote the cooperation and dialogue between youth as means for a resilient and diverse region.

Anja Jokić, Project Coordinator at KOMS says for EWB that joint work within this platform is important for young people and representatives of youth structures across the region.

„Through our joint work within the platform, we as young people and representatives of youth structures of the Western Balkans have been able to better acquaint with the EIP but also assess it through our unique perspectives. Partnered, we have developed a Position Paper mapping the preconditions for the implementation of the EIP, as well as providing a set of conclusions and recommendations in order to ensure the youth of the region gets the best of the opportunities of the EIP projects“, concluded Jokić.

Grk: Brdo Summit brought back the interest of the EU towards Western Balkans