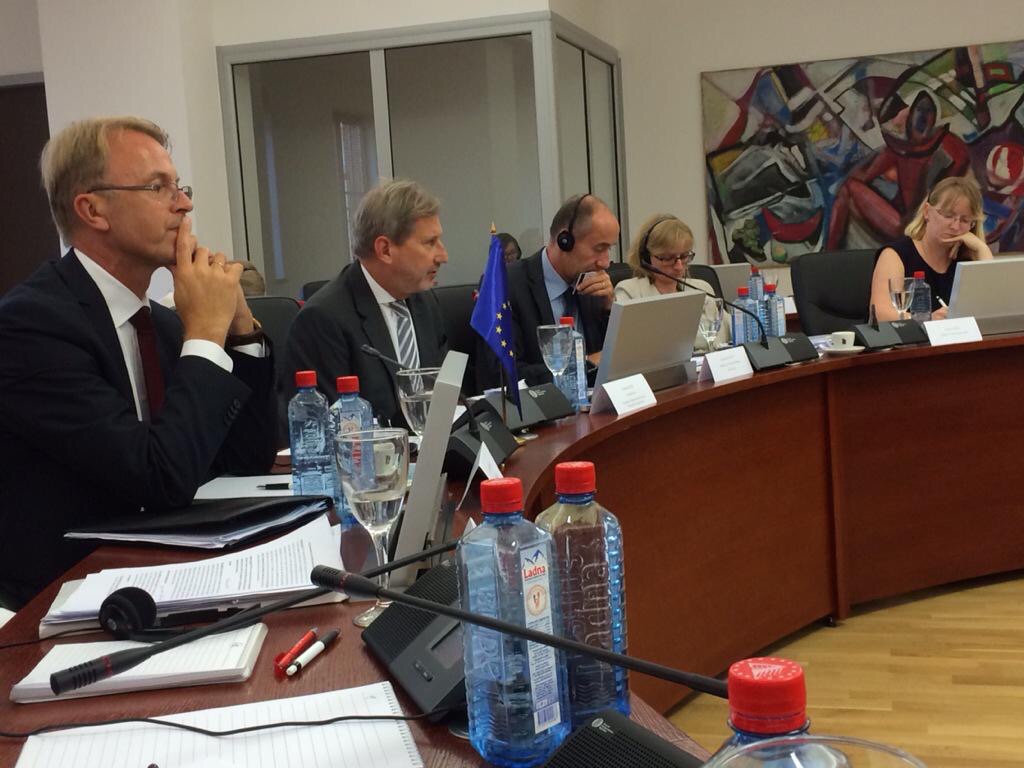 I have been in rather frequent contact with your leaders in recent months, but I always look forward to having the opportunity to talk with political and civil society and business actors in person. I am particularly pleased to meet with members of this Committee for the first time, given you are key players in the EU integration process.

Today, I am here at a difficult time for the European continent and also your country, as we are facing a massive influx of refugees and migrants from mainly countries in crisis. Your country has become a transit country on their route north. This is a challenge not only for your country, but for Europe as a whole, a crisis that demands a European solution, for which the Commission continues to work.

We have already provided humanitarian support and we are in discussion with your authorities about what other assistance we can provide as regards the needs which they identify and those of the refugees and migrants. I will also visit Gevgelija tomorrow to see myself the situation in the country.

The main purpose of my visit, and our meeting today, is about your path to EU integration. I wish this was always a straight forward good news story but it is not. Unfortunately, the absence of constructive political dialogue and polarisation often marked the political debate in this country. The political agreement which your political leaders reached in July, with our facilitation, is an important step in the right direction. It stresses the importance of cross-party support for the strategic goal of Euro-Atlantic integration and puts the interests of the country and its people first, before party interests.This is an important agreement by all the party leaders.

As regards the implementation of this political agreement, I have been closely following the activities of the Working Group. I welcome the return of the main opposition party to Parliament on 1 September and the presence of all parties in all parliamentary committees and other bodies, such as your own. This week, I can also welcome the agreement on the appointment of the Special Prosecutor. We now expect that the Prosecutor will receive all necessary support in fulfilling the important tasks ahead.

Unfortunately, the political crisis meant that the dynamism injected by the High Level Accession Dialogue into the reform process was stalled. So I am pleased that we can hold a plenary session of the HLAD this afternoon and thank DPM Besimi for the work that he and the Secretariat for European Integration have done to prepare it. The High Level Accession Dialogue has proven to be an important catalyst for reforms by focussing on specific reforms in your own five key policy areas, through a process of dialogue and ownership.

As the path to the EU is not a matter for government alone, I welcome that the political agreement stated that the HLAD will be inclusive – involving representatives of the 4 political parties who co-signed it as they are jointly committed and jointly responsible for the implementation of the urgent reform priorities. It also involves civil society, who I met this morning. On which I would recall the importance, for a vibrant democracy, of allowing civil society to play its role freely, without pressure, and without criticism when they meet visitors such as myself.

I acknowledge that your country has already implemented many reforms and those that remain are ambitious and politically difficult. But they will bring real change to the country, which is why we want to hear your views on them today. Over the past months, your country has been working on particularly urgent reform priorities which we presented in June, to address issues revealed by the wiretapping scandal on which we had already signalled concerns. While not prejudging what will be presented by the government and other political parties at this afternoon’s meeting of the HLAD, I would just make a few points, to inspire our conversation here today.

On the rule of law and good governance: you have seen our previous statements expressing concern about political interference in the independence of the judiciary. Your judges are well trained and know how to do their work, they need to be let do so. In this respect, we expect that the new Special Prosecutor will be given the resources and support that she needs to fulfil the difficult – but very important for your country – tasks ahead.

We and others have also expressed concern about state/party “blurring”, the need to separate political parties from the state and the need to reinforce oversight bodies so they can do their job effectively and to respect their work – for instance the Ombudsman Office, the oldest in the region.

On fundamental rights, I will only mention the example of media freedom, where the climate in this country needs to improve.Journalists must be free to do their work, a key element of democracy – any pressure on journalists is unacceptable.

As regards public administration reform, where your country had made good progress in terms of legislation until this year, it is vital that the public service is depoliticised and not subject to political pressures.

We also attach great importance to the improvement of public finance management, which includes transparent budgeting, as well as correct public procurement when public funds are used.

I would like to mention, at the end, two other important subjects:

The remaining electoral reforms need to be implemented before the next elections.The international community will be watching more closely than usual the preparations and conduct of these elections.

I also welcome the consultations on the recommendations arising from the review of the Ohrid Framework Agreement, which we have been looking forward to for some time. These should deliver on the expectations of the citizens of your multi-ethnic state.

This is a crucial time for your country. All eyes are on you and the reforms you need to deliver. Next month, the Commission will present its annual Report which I’d like to be about progress.

Thank you for your attention and I look forward to a good debate.

Fifth meeting of the High level Accession Dialogue in Skopje