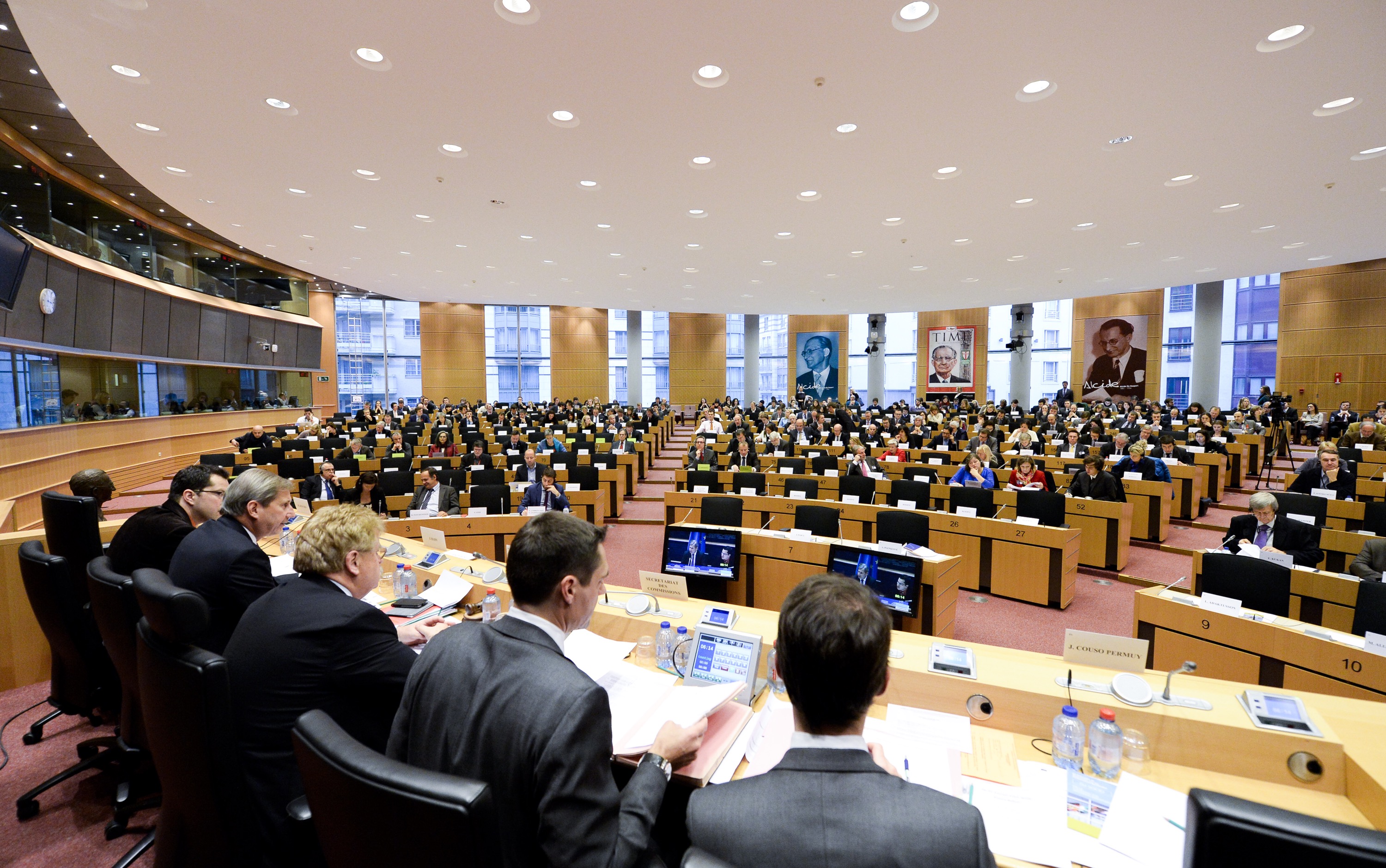 I am delighted to be able to present to you today the enlargement package……..finally! And I am particularly happy to do this here in the AFET meeting together with Colleagues from the national parliaments!

At the end of September last year, during my hearing in this House, I said there would be no standstill in our work on enlargement. The European perspective remains as important as ever.

I also stressed I wanted to step up our activities with pre-accession partners. Over the past 12 months, I have engaged with all our partners very intensively. The Commission has invested heavily in helping to prepare them for the many challenges that lie ahead, in putting them on a firmer European track, and in defusing political crises.

The current refugee crisis has only reinforced the strategic case for close cooperation with the countries in south-east Europe – for the sake of Europe’s own stability. The enlargement process brings concrete results through economic and democratic reforms. These reforms gradually transform the countries concerned, improving their resilience and strengthening stability in our immediate neighbourhood. Therefore, enlargement policy and a smart migration policy with our partners are not mutually exclusive, they are mutually reinforcing.

This year’s Enlargement package, adopted by the Commission today, contains a number of new elements:

First, unlike in previous years when a new strategy paper was adopted each year, this time we set out an overarching strategy for the next 4 years of my mandate.

Second, we have further strengthened the basis for our assessments in the country reports. There is more emphasis on the level of preparedness for taking on membership obligations.

We have also provided much clearer guidance to the countries on what they have to focus on in the year ahead. Also the longer term results that are needed to meet EU expectations are spelled out more clearly than in the past.

Reporting is also more harmonised, with a clear assessment scale allowing each country to see clearly where they stand in key areas.

This approach increases the transparency of the process making it easier for citizens and civil society to scrutinise reforms.

You will see that we have applied this new approach to reporting in a number of areas directly linked to the fundamental reforms. This year’s report clearly reaffirms the need for strong focus on the principle of “fundamentals first” in the accession process, which will continue to be the backbone of enlargement policy under this Commission.

We will continue to focus our efforts on the rule of law, which is crucial. This includes judicial reforms, tackling organised crime and corruption. There is a strong focus on fundamental rights, including freedom of expression and fighting discrimination, notably against the LGBTI community and Roma, and on the functioning of democratic institutions and public administration reform.

We have also put a stronger emphasis on promoting economic development and strengthening competitiveness, which for me is equally a basic pillar alongside the fundamentals.

In other words: The rule of law and economic development are two sides of the same coin.

Let me also underline the importance of regional cooperation. Here, we flag the progress on the connectivity agenda, in particular in the context of the ‘Berlin process’ and the Western Balkans Six format.

We also stress the need for good neighbourly relations and overcoming bilateral disputes.

As regards the current refugee crisis, increased cooperation with the wider region is urgently required to address this phenomenon, in order to identify people in need of protection, to provide assistance, to secure the EU’s external borders and to dismantle criminal networks engaged in people smuggling. The Commission is providing significant support to this end

Let me highlight some of the key points in the 2015 Enlargement Package for each of the countries, starting with the Western Balkans:

Montenegro has made progress in its accession negotiations, including the opening of eight negotiating chapters. This was made possible thanks to progress on the rule of law and strengthening of the legal and institutional framework. However the track record on corruption and organised crime remains limited. With key laws and structures in place, this now needs to be the focus of attention.

I would like to also take this opportunity to recall the need for constructive and inclusive dialogue between government and opposition – dialogue that has to take place in parliament! This is becoming even more urgent, taking into account recent events in the country. Only they can find the best way forward.

Serbia has taken major steps on its EU path, which brings closer the opening of the first negotiation chapters. I am very confident this can be done at an Inter-Governmental Conference still this year.

Serbia finalised rule of law action plans, reached key agreements with Kosovo, and has been vey constructive in developing regional co-operation with its neighbours. At the same time, Serbia embarked on an ambitious economic reform agenda.

Serbia is also affected by the refugee crisis but handled the unprecedented influx of refugees  relatively well.

Serbia should now build on this progress. We expect a renewed commitment to move decisively forward with the reforms, in particular in the area of judiciary, fight against corruption and organised crime, freedom of expression, anti-discrimination, public administration reform and the economy. Equally important is to maintain the same level of commitment for further progress in normalisation of relations with Kosovo.

The former Yugoslav Republic of Macedonia is at a relatively good level of legislative alignment. But the content of the wiretaps which have come into the public domain shows that the political system is seriously undermined by political interference and corruption.

In June and July, I facilitated a political agreement with the help of MEPs Vajgl, Howitt and Kukan. I remain convinced that this is the best way to put an end to the political crisis for once and for all.

In Albania, I welcome the steady progress in addressing the key priorities for the opening of accession negotiations, and in pursuing a set of reforms necessary to advance on the EU integration path. However, more needs to be done on the rule of law in particular through carrying out a thorough reform of the judiciary and gradually building a solid track record on fighting corruption and organised crime.

A more systematic approach to the protection of fundamental rights needs to be ensured and, regarding property rights, the legislation on restitution and compensation of property nationalised under the communist regime needs to be adopted.

As regards Bosnia and Herzegovina, the country is back on the reform track. The EU initiative of December 2014 enabled a new reform momentum which led to the entry into force of the Stabilisation and Association Agreement in June and the adoption of a comprehensive Reform Agenda focused on socio-economic, rule of law and public administration reforms.

In this regard I welcome some implementation of the Reform Agenda which started in July and seems to be on good track. Equally, the Structured Dialogue on Justice proves to be the right forum to address relevant issues on the state level judiciary.

In the near future I expect Bosnia and Herzegovina to improve policy coordination at all levels and deliver on the SAA adaptation following the accession of Croatia.

Kosovo government has taken some very difficult decisions lately with the establishment of the Specialist Chambers and a Specialist Prosecution office as well as the agreements reached with Belgrade in August. Our report acknowledges these key decisions. However the six month political stalemate after the elections delayed key reforms. Kosovo is at an early stage in numerous areas and needs to stay focused on its reform agenda.

Together with High Representative/Vice-President Federica Mogherini I co-signed the SAA with Kosovo on 27 October in Strasbourg. This was a historic step in EU relations with Kosovo and completes the map of SAAs with the entire Western Balkan region. I now look forward to this House giving its consent and to the agreement being concluded and entering into force as soon as possible thereafter.

Turning finally to Turkey, we share common opportunities and challenges, as made painfully clear by the ongoing refugee crisis. I commend Turkey’s impressive humanitarian support to more than 2 million refugees from Syria and Iraq. We have stepped up our cooperation with the Joint Action Plan for refugees and migration management, which First Vice-President Timmermans and I negotiated.

But our relations with Turkey extend beyond migration, and we have continued to enhance our cooperation in all areas of joint interest: foreign and security policy, counter-terrorism, energy, trade and economic relations.

The Commission hopes to see an end to the escalating violence in Turkey and a return to the negotiations on a lasting solution of the Kurdish issue.

Over the past year, significant shortcomings affected the independence of the judiciary as well as freedom of assembly and freedom of expression, in particular as regards increased pressure and intimidation of journalists and media outlets as well as amendments to the internet law which allow blocking media content. Reforms in these key areas are an indispensable priority in Turkey’s accession process – in Turkey’s own interest.

We will strongly engage with the new Turkish government on these key issues. This is all the more important now, with hopes that the momentum in the settlement talks on the Cyprus issue can deliver decisive progress and boost accession negotiations with Turkey.

The support of this Committee and your continued bilateral contacts with enlargement countries will be crucial in that regard.

I look forward to the European Parliament’s response to each of the country reports.

McAllistaer: The day the first chapter is opened, will be the moment when the real work begins