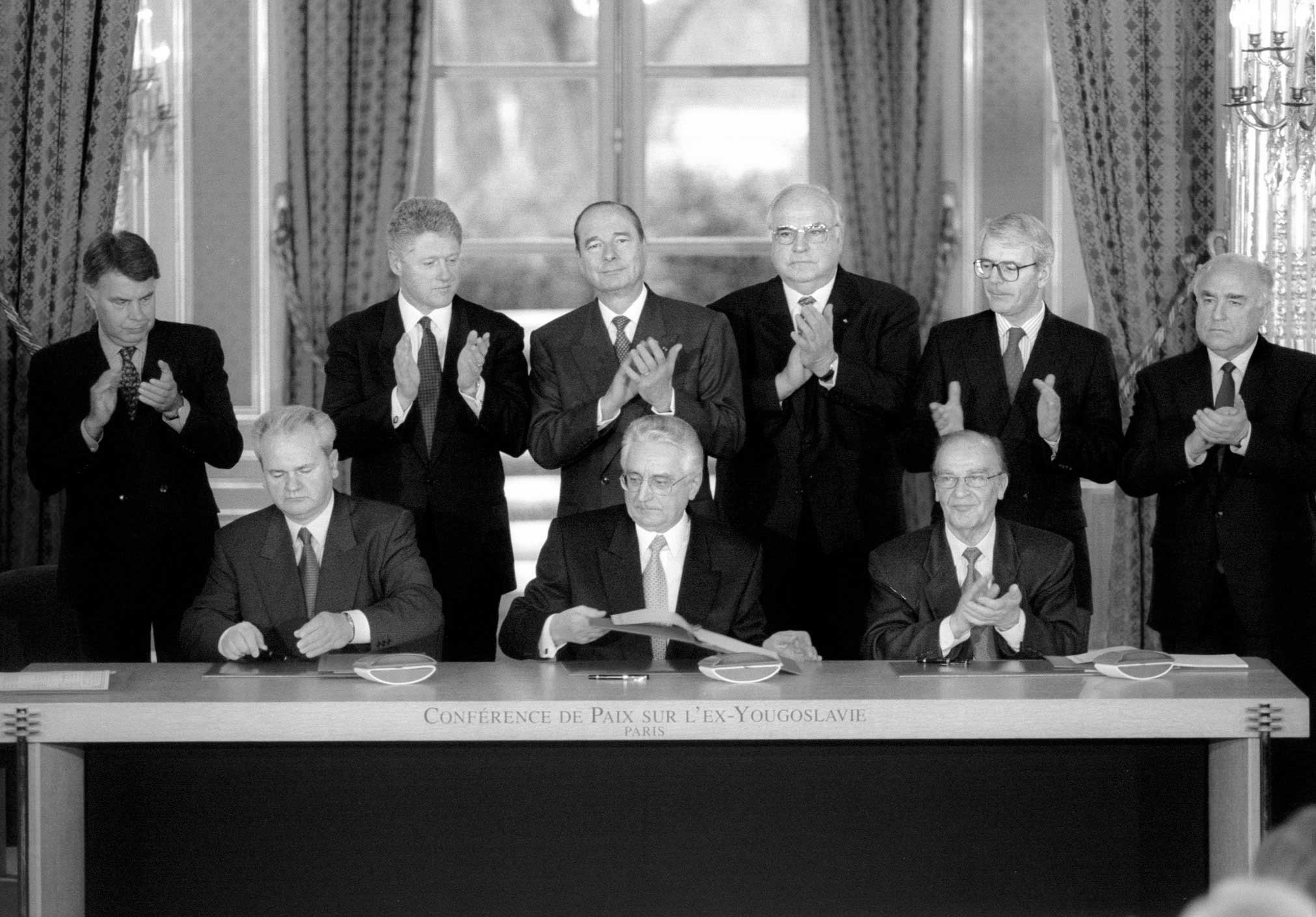 Twenty years ago I lived in Sarajevo. I was a journalist and had covered the war in Bosnia and Herzegovina. I had witnessed the first Serb attacks in 1992 that hit most Bosniaks unaware. I had written about the killings, rapes and deportations carried out by Serb forces to “cleanse” the territories they occupied of Bosniaks and Croats. I had reported on the Croat-Bosniak war within a war, when Croatia under President Tudjman supported the creation of a Bosnian-Croat statelet. I wrote about people who lived under shelling, with only sporadic electricity, who were cold during winter and sometimes had hardly enough to eat. There was tremendous grief when loved ones were killed, but also heroism and belief in a better future.

When on Tuesday afternoon, 21 November 1995, news of a peace agreement reached in Dayton, Ohio, spread through the snow-covered streets of Sarajevo, it put a smile on most faces. “It’s wonderful,” declared 38-year old Dragana Zametica, a dental technician who was out shopping for food. “No more war, no shelling. Bosnia will develop now. Soon I will start receiving a real salary and be able to offer something to my two children.” Like most Sarajevans, who had upheld the notion of a unified multi-ethnic country, Ms Zametica found the peace deal “unjust”. It divided Bosnia into two “Entities” – Republika Srpska and the Bosniak-Croat Federation – with a high degree of autonomy.

A few people were outright gloomy. “Nothing has been solved with this agreement,” said Merhudin Dizdarevic, a 46-year soldier making some money as a taxi driver. “I can guarantee you that there will be another war when the NATO troops leave.”

He was wrong, fortunately. NATO did an outstanding job in Bosnia, creating lasting peace. Numbering almost 60,000 at deployment, NATO-led troops oversaw the envisaged separation of forces, transfers of territory, and demilitarisation. Later on they supported refugee return and detained indicted war criminals. No NATO soldier died in a hostile act. When NATO left in 2004, it had reduced its force to 7,000 troops. They were replaced by an EU military mission with currently 600 troops.

Yet other hopes of Bosnians have not been fulfilled.

Bosnia’s economy has been developing at a snail’s pace. Its GDP per capita is 28 percent of the EU average (in the EU, the poorest country is Bulgaria with 45 percent). Unemployment runs at 28 percent, and the average monthly salary is 425 Euro.

Apart from Kosovo, Bosnia is the only ex-Yugoslav country that has not been able to apply for EU membership. Its NATO membership action plan has been dormant, even though Bosnia’s 2005 Defence Law stipulates NATO accession as a goal.

Politics are divisive and inefficient, with political leaders frequently blocking each other. In recent years, the acrimonious rhetoric and obstruction of State-level institutions by Milorad Dodik, currently the president of Republika Srpska and for many years its prime minister, has poisoned the political process.

Bosnia is regularly called “dysfunctional”, sometimes even “a failed state”. It is accused of corruption, an expansive bureaucracy and unbridgeable ethnic divisions. My friends in Bosnia are disillusioned and frustrated. In a 2013 survey, half of the respondents chose out of 10 options the word “lethargic” to describe their state of mind. Only 14 percent used positive words such “optimistic” and “content”.

Twenty years ago, I imagined a better future for Bosnia.

However, I do not think that the situation is as bleak as usually described. Among the West’s interventions, Bosnia stands out as a remarkable success. There is stable peace. Refugees have been able to repossess their apartments and houses, and many have returned to their homes. Among them are those who fled or were expelled because of their ethnic background: one-third of Bosniak and Croat refugees have gone back to Republika Srpska, and the rate of minority return is similar in the Federation. There are high rates after the ethnic cleansing campaigns of the war. There is freedom of movement. Elections take place regularly and fulfil democratic standards.

Yes, there is corruption, but it is not crippling. Despite many levels of government, governance structures are not sprawling – Switzerland with 2,805 parliamentarians has twice as many per capita as Bosnia with 613. There are also no deep ethnic divisions. People from all communities mingle, talk to each other, trade with each other, and in many places still live with each other.

On some issues, Bosnia’s leaders have achieved amazing successes. Between 2009 and 2010, they put aside all differences and fulfilled a demanding set of EU conditions to qualify for visa-free travel with the EU’s Schengen zone. They introduced new biometric passports, improved border control, set up an asylum system, stepped up the fight against organised crime and corruption, and established close cooperation with the EU on security issues.

Another major achievement has been the creation, with NATO’s help, of Joint Armed Forces – a small professional army of 10,000 soldiers and 5,000 reservists under a single unified chain of command with a Joint Staff and two commands (operational and support). The Armed Forces replaced the three war-time armies, which totalled more than 400,000 troops at the end of the war. In 2006, Bosnia joined the Partnership for Peace programme. Bosnia’s Armed Forces have contributed military personnel to NATO’s ISAF mission in Afghanistan and Operation Enduring Freedom in Iraq, as well as many UN peacekeeping missions such as South Sudan, Liberia, Cyprus and Congo.

A country in many transitions

Things have not been easy for Bosnians. They have been undergoing a shock transition from peace to war to peace again, from a planned economy to a market economy, from a socialist one-party system to a democracy. Many people still long for Yugoslavia, which offered decent living standards, freedom to travel, and cushy jobs. Unlike countries in eastern Europe, Bosnia did not want to get rid of socialism – it lost it. Many people do not identify with the current state. It is a compromise, not what they or their parents fought for in the 1990s, and it does not deliver what they expect.

The international community has often complicated things, due to opposing views on what needs to be done. Some advocate an imposition of a Dayton II – a new state structure – or at least forcing the Bosnians to change the Dayton constitution. This usually comes with calls to re-establish a powerful “High Representative”. This position was created under Dayton to implement the civilian parts of the peace accords and later endowed with extensive powers. Between 1998 and 2005, successive High Representatives dismissed hundreds of public officials and imposed many important laws – not really an exercise in democratic decision-making.

Many people still long for Yugoslavia, which offered decent living standards, freedom to travel, and cushy jobs. Unlike countries in eastern Europe, Bosnia did not want to get rid of socialism – it lost it

Others, including myself, believe that change has to come from within to ensure ownership, but also because the enforcement of a new state organisation would take years and require resources that nobody is willing to commit. The path to EU membership provides enough orientation to gradually turn Bosnia into a functioning country. What makes any structure work or leads to its change is political will.

The challenge of conditionality

Conditionality has also not always been applied to Bosnia’s benefit. In 2009, a ruling by the European Court of Human Rights demanded a re-organisation of the tri-partite Presidency and the upper parliament, both of which are composed of equal numbers of Bosniaks, Serbs and Croats. The aim was to ensure that “Others” – all those that do not define themselves as members of one of these three communities – can serve in these institutions without having to declare affiliation to one of the three groups. The EU made this a condition for accepting a membership application from Bosnia. As a result, this became the main point on the political agenda. Close to 200 meetings were held and other important issues, such as the economy, were neglected. Last year, the EU wisely decided to decouple this demand from the membership application.

NATO’s condition for putting the NATO membership action plan (MAP) into force also appears increasingly misguided. It is the official registration of 63 immovable defence properties, mainly barracks and buildings used by the Ministry of Defence. Some of them were not registered at all during socialist times, or are still registered in the name of late Yugoslavia.

This issue has been lingering since a 2001 Agreement on Succession Issues between the successor states to former Yugoslavia. It has not been resolved due to disagreement whether ownership belongs to the Entities or the State. In 2010, NATO foreign ministers set the condition that Bosnia would join the MAP only when all immovable defence properties are registered as state property of Bosnia, for use by Bosnia’s Ministry of Defence.

Today, more than five years later, the defence property issue has still not been resolved, and Bosnia still has no MAP, while Russia has stepped up interference in the Western Balkans, trying to prevent the countries from Euro-Atlantic integration. Has the registration issue been worth this delay? I do not think so.

Thanks to a 2012 ruling by the Constitutional Court of Bosnia, which has allocated ownership of state property to the State, there has been recent progress. Using this ruling, the Defence Ministry has been able, through lengthy legal procedures, to register 23 of 63 defence properties. However, the completion of the process is not yet a done deal. Republika Srpska has appealed against it to the State Court, claiming the property on its territory for itself. Unless the court dismisses the appeal and the registration process continues, NATO Allies should try to find a way to activate the MAP without the registration of all the defence properties.

This year, there has also been progress on the EU path. In July 2015, all levels of government adopted a comprehensive economic and social Reform Agenda. Implementation of this agenda has begun. If it continues, the EU has promised to accept a membership application from Bosnia. This would put it firmly on the EU accession path and intensify interaction with EU institutions.

It is not the first time Bosnia is making progress. In the past, it has always stagnated again, usually because of its own doing, but sometimes also due to unreasonable demands of the international community. However, there will be a time when it will continue to move forward, and it could be now.

This article is originally published at NATO Review Magazine.