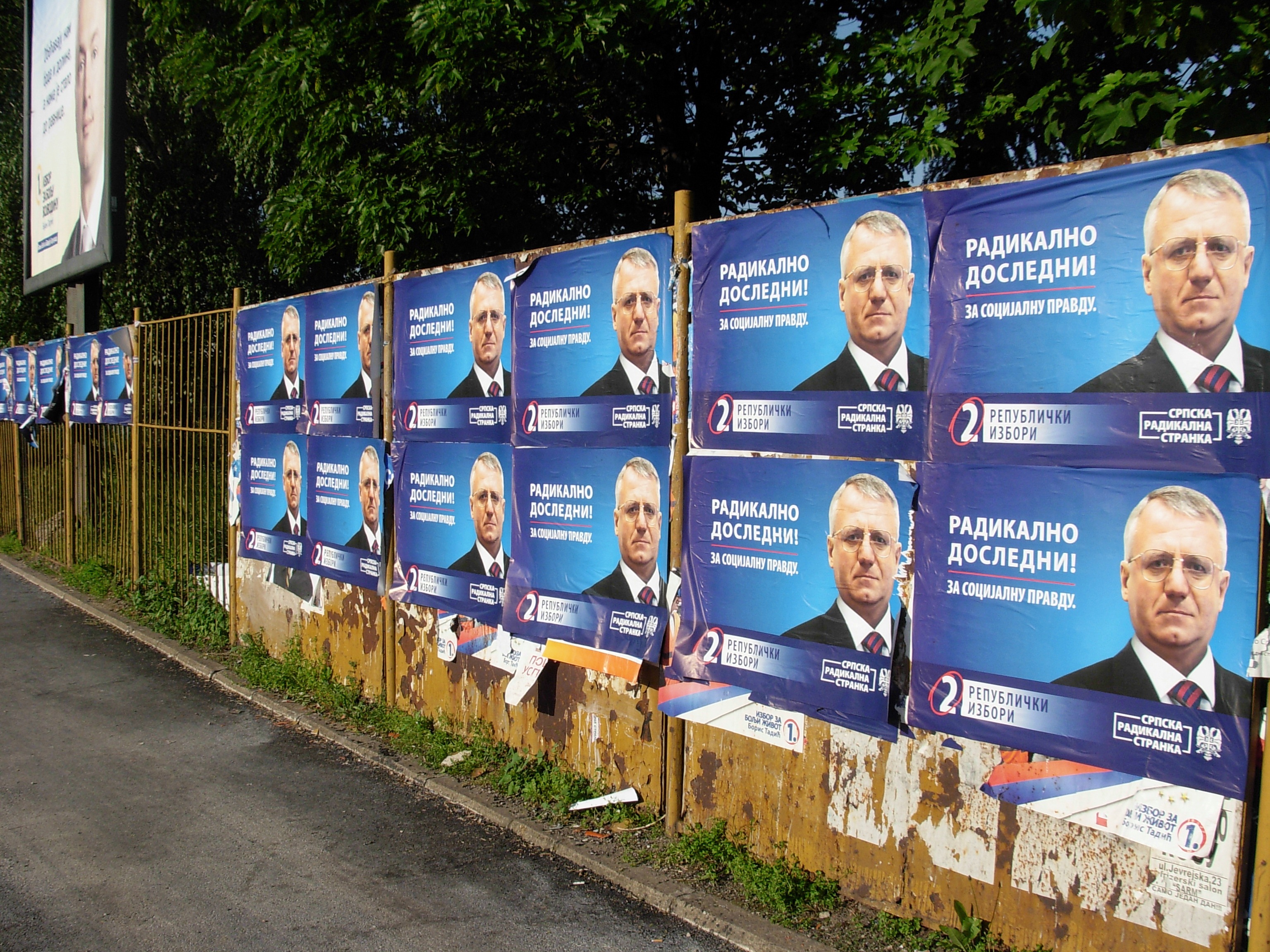 After the Karadžić verdict, the International Criminal Tribunal for the Former Yugoslavia (ICTY) delivered another highly anticipated judgment on Thursday, 31 March: after a thirteen year trial, Serbian nationalist politician and self-proclaimed Chetnik leader Vojislav Šešelj was acquitted of all charges, including war crimes and crimes against humanity. Tena Prelec analyses the reactions to the trial and assesses what this may mean for relations in the region.

Shock and disbelief, followed by sombre expressions of anger towards a ‘shameful verdict’ and a variety of jokes on the accused ending up by being awarded a prize instead of a prison sentence. This was the most widespread immediate chain of reactions across the region at Vojislav Šešelj’s full acquittal at the ICTY on all nine counts, including three of crimes against humanity (for persecution on political, racial or religious grounds) and six more for war crimes (including murder, torture and destruction of institutions dedicated to religion or education). Later in the day, the first official hard posturing: Šešelj is now officially a persona non grata in Croatia, the country’s Ministry of Internal Affairs has announced.

In Serbia, not everyone was jubilant. Quite the contrary, official reactions were slow to come in, as if nobody had quite expected this outcome. Human rights groups expressed outrage and were soon joined by media commentators worried at the path that has now been cleared for Šešelj to make his fully sanctioned return into Serbian politics, and most likely into the parliament, in a matter of weeks. And yet incidents like the carousel of Šešelj’s supporters, who promptly invaded the martyred Bosnian town of Srebrenica to celebrate the outcome of the verdict, speak of reignited tensions and of wounds newly rubbed with salt. Where can this lead to?

The unease at Šešelj’s acquittal is made deeper in the Balkans by the resonance it has with the roots of the recent conflicts. A sharp-minded and precocious legal scholar turned nationalist politician and self-proclaimed Chetnik leader, Šešelj was not a military general, but rather a thinker. Proving his culpability was thus always going to be a difficult task. And yet it matters, if seen in the context of how the wars that accompanied Yugoslavia’s disintegration had taken shape: the blood spread on the ground had been prepared by years of escalating propaganda that saw intellectuals driving the nationalist rhetoric that legitimated and sustained Milošević’s murderous actions. The publication of the SANU Memorandum in 1986 is sadly remembered as one of the key moments in the breakup of Yugoslavia.

Even though it was received as a shock, the judgment’s result was thus not unimaginable, and several analysts had predicted either a full acquittal or a sentence that would not exceed the time Šešelj had already served in jail. The verdict certainly represents a defeat for the prosecution, accused of using imprecise terminology and of framing the charges too broadly, but it is also relevant that the whole trial has been marred by significant problems that have influenced its unwinding. Importantly, it is the first time an ICTY judge – Frederik Harhoff, who had openly contested the ICTY’s willingness of letting the instigators of crime off the hook – was disqualified for bias, upon a motion filed by Šešelj himself. Had Harhoff still been part of the judging panel of three, there is little doubt that the outcome would have been different.

There are at least three disturbing elements of the majority judgment, read by the controversial judge Jean-Claude Antonetti. First and foremost, it was found that the idea of ‘Greater Serbia’, the bloodcurdling ideology Šešelj took upon himself to spread and that he never reneged, was “in principle a political plan, not a criminal one” as it was advocated by the indicted. This stands in plain contradiction with statements given by Šešelj himself, e.g. when he stated that “not a single Ustaša (here: derogatory for Croat) should leave Vukovar alive”, or when he boasted about having himself “spilled Ustaša blood in Serbian Slavonia”. Second, it was suggested that the Serb-led actions in Bosnia and Croatia should be understood in the context of the two countries’ secession from Yugoslavia, thus implying an element of self-defence in attempting to preserve the territorial integrity of the Yugoslav federation – a first for the ICTY, and arguably in contradiction with previous decisions. Third, the majority stated that they couldn’t dismiss Šešelj’s argument that civilians forcibly deported from disputed areas would have in fact been taken away “out of humanitarian motives”.

This being a first instance judgment, the prosecution has the possibility to appeal. It is bolstered in doing so by a powerful dissenting opinion by Judge Lattanzi, who has strongly criticised the core findings of her two colleagues in delivering their majority verdict. In a dissent that reveals the tensions within the ICTY ranks, Lattanzi accuses the majority of providing “insufficient reasoning, or no reasoning at all” to support their main deliberations, and finds instead ample evidence to conclude that a joint criminal enterprise existed. She claims that Šešelj’s responsibility was excluded by relying on “irrelevant considerations” and points at a number of contradictions inherent to the judgment, ending on a particularly dramatic note:

On reading the majority’s Judgment, I felt I was thrown back in time to a period in human history, centuries ago, when one said – and it was the Romans who used to say this to justify their bloody conquests and murders of their political opponents in civil wars: “silent enim leges inter arma”. [“the law falls silent in times of war”]

Regardless of what the future steps of the trial will bring, they will almost certainly not impact the imminent elections in Serbia, scheduled to take place on 24 April. Šešelj is the first-ever ICTY defendant who was allowed to be absent at his verdict’s reading, after the tribunal granted him temporary release on health grounds in 2014. Since then, he has been holding inflammatory rallies in Serbia to gather support for his Serbian Radical Party (SRS). The party failed to win seats in 2012, while he was in detention, but looks now set to succeed in this aim, currently faring at just over the threshold needed to make it into the parliament (6 per cent).

In Croatia, the ruling was widely interpreted as a green light for Serbia’s EU accession, while it was seen as a slap in the face of those who suffered during the war. That the reading of the verdict coincided with the anniversary of the ‘Bloody Easter of Plitvice’, the day when the first Croatian victim fell in 1991, did not help. It remains to be seen whether this will be enough for Croatia to make use of its EU membership to block Serbia’s progress on its way, or if other preoccupations will end up prevailing. The recently appointed PM, Canadian-bred businessman Tihomir Orešković, has shown a willingness to focus on economic development. Besides, the Croatian political elite is currently busy sorting out its ranks, both in the government coalition, where the first tensions between the ‘technocratic’ PM and the leader of the conservative Croatian Democratic Union (HDZ), Tomislav Karamarko, are surfacing, and in the opposition, as the Social Democratic Party (SDP) elects its new leader on Saturday, 2 April.The situation has been read as a win-win for the Serbian Prime Minister Aleksandar Vučić. Both the PM and the current President, Tomislav Nikolić, were once part of Šešelj’s SRS, before splitting out of it and launching the Serbian Progressive Party (SNS) in 2008. SNS are now the foremost political formation in Serbia and are set to cement their support in the anticipated elections in three weeks’ time. With this verdict, Vučić’s past has now finally been legitimised and he has at the same time gained the perfect adversary at the elections, as the viable presence of a hard-liner further qualifies SNS as the moderate option.

It is to be hoped that the sheer fatigue generated by discussions about a conflict that ended over twenty years ago will prevail and that the media will change its focus soon. But this highly mismanaged trial has done remarkably little to aid reconciliation and to prevent an unseemly carnival of old emotions from resurfacing. The possibility of an appeal makes a second round more likely.

The original article can be found at: http://blogs.lse.ac.uk/europpblog/2016/04/01/can-the-ictys-acquittal-of-vojislav-seselj-hasten-tensions-in-the-balkans/

Council of Ministers of BiH: A step towards on harmonisation BiH's legislation with the EU acquis

Remarks by President Tusk after his meeting with PM Đukanović