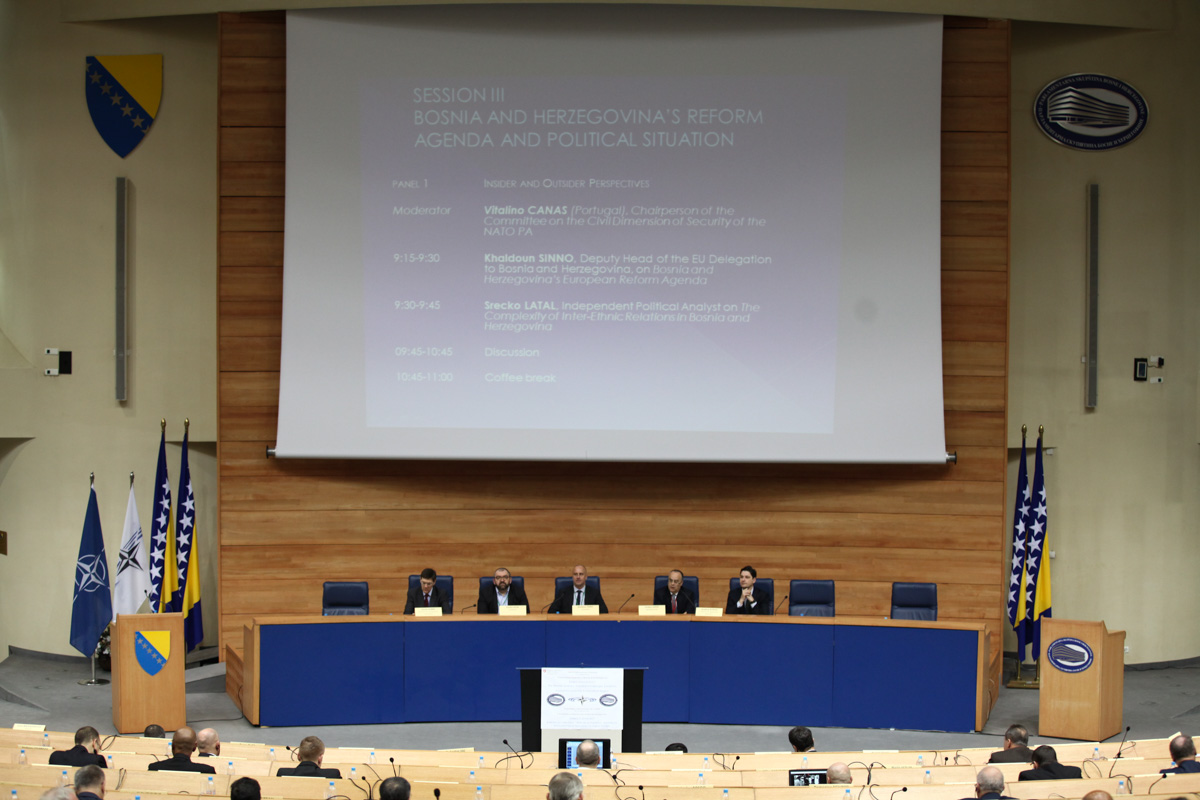 SARAJEVO – Chargé d’Affaires of the EU Delegation to BiH Khaldoun Sinno emphasised the importance of the EU’s role for improving the lives of citizens through supporting socioeconomic reforms in Bosnia and Herzegovina, at a panel on the country’s Reform Agenda and the political situation under the auspices of the 94th Rose-Roth Seminar in Sarajevo on 22 March.

The seminar entitled “The Western Balkans: Transition Challenges, European Aspirations and Links to the MENA Region” brought together over 170 participants, including 84 members of parliament from 36 NATO member states and partner countries.

Speaking about the new EU approach towards the country spanning the past two years, Chargé d’Affaires Sinno recalled the objectives of the Reform Agenda adopted by BiH authorities. He underscored that the Reform Agenda was designed to rebalance the country’s economic model – which is dominated by the public sector at the expense of the private sector – as well as to grant citizens across the country, particularly youth, access to more opportunities and jobs.

“This new approach very much resonates with the EU’s Global Strategy that we presented last year. Together with our partners, we promote resilience worldwide. A resilient state is a secure state, and security is key for prosperity and democracy. But the reverse holds true as well. To ensure sustainable security, it is not only state institutions that we will support. A resilient society featuring democracy, trust in institutions, and sustainable development lies at the heart of a resilient state,” Sinno underlined.

Sinno further reflected on the visits of High Representative/Vice-President Federica Mogherini and Commissioner for European Neighbourhood Policy and Enlargement Negotiations Johannes Hahn to Bosnia and Herzegovina earlier in the month, which represent a clear political sign of the EU’s interest and support to the country.

The three-day seminar, organised jointly with the NATO Parliamentary Assembly’s Mediterranean and Middle East Special Group, discusses prospects for EU and NATO enlargement in the Western Balkans, intra-regional relations and internal political developments in the context of challenges coming from the unstable Middle East and North Africa (MENA) region.

The NATO PA has held 20 Rose-Roth Seminars in the Western Balkans since the beginning of the programme in 1991. This was the fourth one held in Sarajevo.

Lajčák: EU getting farther away from Western Balkans