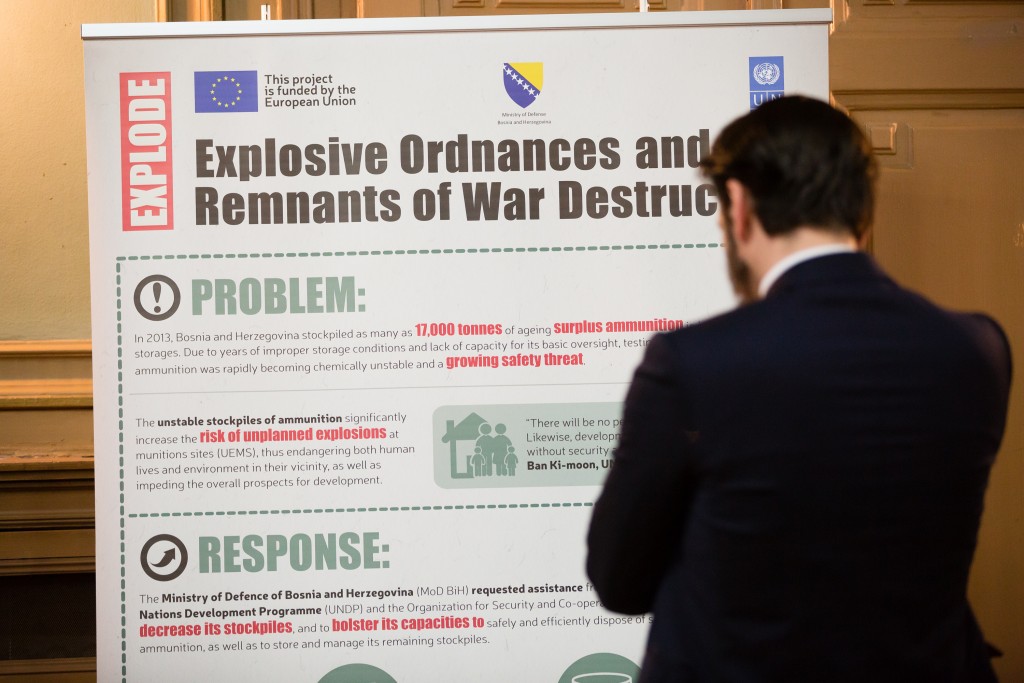 EXPLODE project; Photo: Delegation of the EU to BiH

SARAJEVO – Positive results in improving community security through the European Union-financed EXPLODE project were presented at the project closing ceremony in Sarajevo on 29 March. Explosive Ordnance and Remnants of War Destruction (EXPLODE) project was launched in April 2013 with the aim of destroying explosive ordnance and remnants of war in order to improve the security of citizens of Bosnia and Herzegovina. It was funded by the European Union in the amount of EUR 4,604,830 and implemented by the BiH Ministry of Defense and United Nations Development Programme (UNDP), it was reported by the Delegation of the EU to BiH.

Speaking about the past and future EU support to the demilitarization process in BiH, Head of Cooperation at the EU Delegation Melvin Asin reminded that up to today, EUR 12 million has been allocated to prevent the illicit use of and access to firearms, small arms and light weapons, and to dispose of unsafe ammunition.  He emphasized that in addition to this amount, since 2004, EUR 46 million has been spent on de-mining and clearance of unexploded devices, under the Instrument for Pre-accession Assistance.

“It looks as if BiH is on track. Through this project we have helped to establish conditions for sustainable management of the ammunition life-cycle. Yet, for this to become efficient and have an overall impact on the performance of the Armed Forces, the stockpile should be further reduced. I have the pleasure to confirm that we will continue to support BiH’s efforts to reach a level of manageable stockpile by end of 2018. The new sequel of explode will encompass EUR 2.8 million and is expected to start next month,” said Asin.

The main goal of the project was the disposal of old, chemically unstable ammunition surpluses stored in military warehouses across BiH. The project improved the security of the Armed forces staff who are in daily contact with this material and the security of those living in the vicinity of storage sites, mainly located in rural areas.

Sezin Sinanoglu, UNDP Resident Representative in BiH, pointed out: “The project had three objectives. The first was to reduce the amount of unstable and unsafe surplus ammunition. As regards the attainment of this objective, the project has indeed achieved a great success. 1,800 tons of surplus ammunition were destroyed, including small calibre ammunition as well as light weapons, artillery and white phosphorous munitions. The second objective of Project EXPLODE was to build the capacity of the Armed Forces and Ministry of Defense of BiH in order to improve their abilities to manage ammunition and destroy the remaining ammunition stockpiles. In the course of the project, 72 buildings were successfully rehabilitated, their safety and security were improved, and the buildings were better equipped. UNDP remains committed to the necessary work in order to do everything that needs to be done together with its partners.”

Project EXPLODE, in coordination with EUFOR, provided specialized trainings on ammunition life-cycle management to the staff of the Armed Forces of Bosnia and Herzegovina.

“I believe that this project has made a multiple contribution, apart from the level of security and stability, it contributed to our educating a considerable number of members of armed forces, drafted and adopted appropriate documents that will help us manage the life cycle of ammunition and mines and explosive ordnance more easily in the future,” said Marina Pendeš, Minister of Defense of BiH.