TIRANA – Albania considers the EU integration as a national objective and the entire political spectrum express in all occasions its full commitment to the EU-reform agenda. However, the history of country’s EU integration efforts has been characterized of a consistent ‘track record’ of political polarization and parliamentary boycotts of the opposition, being that the left or the right wing for the respective timeframe when in opposition.

Following the entrance into force of the Stabilization and Association Agreement, in May 2010 it was established the Stabilisation and Association Parliamentary Committee (SAPC), which institutionalized the regular cooperation between the European Parliament and the Parliament of Albania. It aims at serving as a forum of bilateral meetings and exchange of views between the members of two parliamentary delegations, besides providing for an opportunity to oversight Albania’s integration process.

As a consultative body, SAPC can convert into a cooperation catalyst for enhanced political dialogue on reform processes as well as indirectly exert pressure on the policy-making process, by submitting (non-binding) recommendations to the European Parliament, Commission and Council, as well as to the Parliament and Government of Albania. It organizes systematic meetings (twice a year), in Tirana and in the European Parliament’s seats. This venue rotation allows to local politicians to interact, impact and persuade the colleagues from the European Parliament in bringing forward Albania’s accession process, along with strengthening the connections with related political groups.

Despite its primary intention, the functioning of this inter-parliamentary forum has been hampered by unceasing political polarisation and lack of spirit of cooperation, compromise and flexibility within the Albanian delegation, which is persistently risking jeopardising and undermining the EU integration efforts.

Up-to-date SAPC inter-parliamentary forum has organized 11 meetings, which have often ended in communication stalemates. The heated debates during these meetings have resulted in shifting priorities, counter-productive outcomes and negotiation deadlocks 6 times over 11 (as shown in table 1). Moreover, the political groups within the Albanian delegation have often stacked to their party positions, avoiding thus any bargaining opportunities. Consecutively, this fluctuating domestic political situation has not allowed for a regular modus operandi of SAPC vis-à-vis the follow-up of the previously issued recommendations. 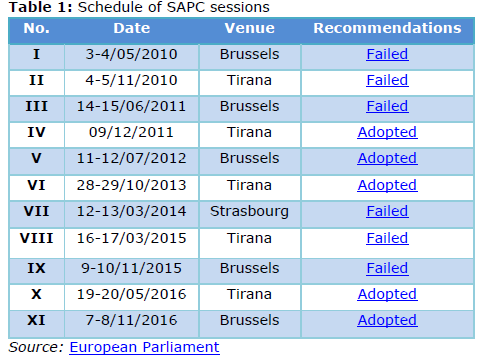 In front of these perpetual communication difficulties and continuous failure to adopt the final conclusions and recommendations, in 2015, the delegation of the European Parliament proposed to amend the Rules of Procedure, so as to introduce more clarity in the voting procedure and ensure smoother running of the meetings. The amended version now clearly states that SAPC’s recommendations are considered adopted only when the majority has been reached between the members of each parliamentary delegation present at the meeting. Moreover, each member of SAPC has a single, personal, non-transferable vote and the voting procedure is done by show of hands or electronically.

Despite the regular calls for an appropriate conciliatory language and extension of the constructive political dialogue to the SAPC sessions, the Albanian delegation has not managed to exploit its full capacity and engagement to achieving a constructive dialogue and democratic political culture. The same situation is reflected also within the political groups composing the national parliament. Although the Commission and European Parliament have brokered several times for the establishment of a healthy political climate in Albania, no sustainable results have been achieved by the local political elites.

The analysis shows a mismatch between the official declarations of the party leaders on the national EU-reform agenda and the political practices on the ground. The formal commitments have resulted in pure political rhetoric and have not been converted yet into effective changes of the parliamentary behaviours.

In front of a fierce inter-party competition and recurrent boycotts, it is urged for an immediate mobilization of local stakeholders in order to deliver on new achievements in the integration path. Recognizing that parliamentary scrutiny in the Balkans is still inadequate, both the Union and civil society should strongly push for the inclusion of media, NGOs and trade unions in the improvement of the political climate and reinforcement of their role as supervisory bodies in the conduct of reforms. Moreover, the National Council for European Integration, as the highest national advisory body providing for strategic directions and fostering all-inclusive cooperation between political parties, public institutions and civil society, should take a clear stance on the present political stalemate, before the state of affairs becomes detrimental for Albania’s European integration process.

Mogherini: Governments have obligation to promote universality of human rights