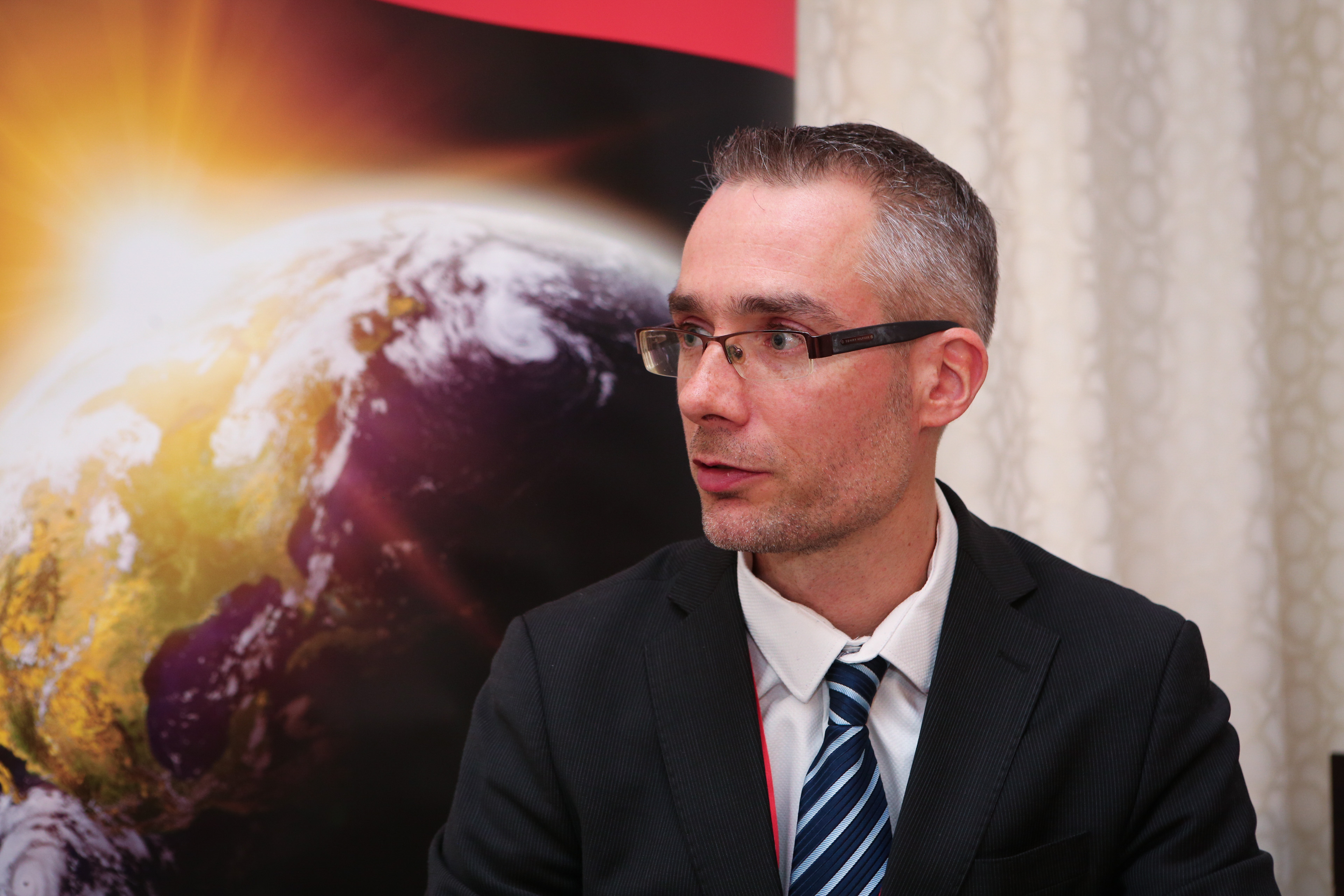 During the Globsec 2017 Bratislava Forum, we talk to Daniel Milo who is a Senior Research Fellow at the GLOBSEC Policy Institute. His main field of expertise is extremism, cyberhate, international extremist networks and use of propaganda by foreign actors. He published or co-authored several publications on these issues including analytical report mapping the connections between Kremlin and far-right political actors in Slovakia.
European Western Balkans: You worked as an advisor to OSCE Office for Democratic Institutions and Human Rights. How would you assess the current situation in terms of democracy, media freedom and the rule of law in the Western Balkans?

Daniel Milo: There are some troubling signals coming from the Western Balkan, as it was also mentioned during one of the main panels. The prospect of joining the EU and NATO for some countries seems to be disappearing, and this has a very negative influence on the societies but also the political landscape in these countries. By losing this prospect of having the real chance in the next couple of years to join the EU and/or NATO, these countries could easily slide back to the chaos and extreme nationalism of the nineties, which would have a profound negative consequences not only for these countries first and foremost, but of course for the larger Europe.

EWB: When you say ‘some countries of the region’, can you name some of them and explain the main causes for this situation?

DM: It is quite obvious that Bosnia and Herzegovina and Macedonia are perhaps the two most vulnerable or volatile countries in the region which are facing many different challenges.

EWB: There are many people who say that Russia has tremendous influence in the region. Can you assess the Russian strategy towards the Western Balkans? How do you see the work of Russia towards those countries?

DM: Yes, there has been an increased attention in the Western policy circles, in media circles on the increased presence of Russia in this region. It seems to be going hand in hand with some energy-related projects, buying up of ownership of some energy monopolies, such as in Serbia, and trying to support forces resisting the Euro-Atlantic integration. The case of failed or attempted coup in Montenegro last October is a prime example proving what kinds of methods and tools these actors are using – proxies, people who went to Eastern Ukraine, and who are now working as a mercenaries or loosely affiliated paramilitary actors who could be inserted into a particular country with a very clear mission. There are also some troubling signals of an increased presence of such forces, not only in Macedonia but also in Republika Srpska in Bosnia and Herzegovina and other countries.

EWB: What do you consider as the key security challenges for the region of the Western Balkans?

DM: One of the key security challengesis disproportionately high number of people from the region who joined the conflict in Syria.If you look at the numbers and the share of foreign fighters coming to Syria from the region to the number of people living in a particular county it is really troubling that so many predominately young people decide to go over to Syria and to fight alongside Islamic extremists. Once these people return to their home countries, these countries would be in a same situation as Belgium, Netherlands or the UK, France, without having the security net and all the counter measures which are present in Western European countries. How to integrate these people, how to make sure that they do not radicalise others, that they would not commit one day a terrorist attack?

EWB: What do you consider as the key strategy to decrease the number of the people that are going there and what do you suggest resolving this problem in the region, especially in Kosovo and Bosnia and Herzegovina, as those two countries are marked as the countries from where most of these people came from?

DM: I just want to highlight that this is not the only security challenge these countries have to face. Maybe even bigger threat is the increasing polarisation of the societies and breakdown of the post-conflict reconciliation processes in some of the countries. In some of these countries, the reconciliation processes which were very much driven by the the EU with the support of the US came to a halt, or in some countries even reversing. What we might observe is drawing of ethnic or national lines within the countries and repeating of the same old rhetoric we heard in the nineties, which at the end of the day lead to all of the bloodshed and casualties we observed in the Balkans during the nineties. Going back to the issue of foreign fighters, I think this whole issue should be addressed from a number of angles, starting from cutting foreign support for radical imams which are present in this countries. I think that there needs to be a clear line between respecting freedom of religion and belief and allowing imams or priests to radicalise people and by using the religion as a political campaigning tool which seems to be the case in many mosques and other religious associations. Similar measures are now being discussed and introduced in some Western European countries. It might be a good idea for governments in the Balkans to have a look at these measures which are now being introduced in the Western European countries facing the same type of dilemma.

The second stage would be to increase the activities of security services, police and judicial system trying to prevent people from travelling to these countries by issuing travel bans to individuals which exhibit signs of radicalisation and also to monitor people who come back. I have no doubts that the monitoring  of foreign fighters coming back from the conflict in Syria is not that well developed in this region because of the shortage of staff, finances, etc. Moreover, the reintegration of those people and trying to work with people who went through military conflict and who either killed or were witness to war crimes is extremely difficult and time-consuming and would require huge financial and human capacities. Given all the challenges these countries have to face the question is whether there is sufficient attention being paid to thi slow simmering threat in the region.

DM: It is certainly very unwise and dangerous development that we again hear that this type of rhetoric of ‘Greater Albania’ and ‘Greater Serbia’ which led to most of the bloodshed in the region. Having all kinds of historical grievances revived in the 21st century is really a path leading to more bloodshed and conflict. Unfortunately, it seems that the identity politics, which affects not only the Western Balkans but also Central Eastern European countries and West Europe, is on the rise. Religion and nationality, as the two primarily identities most people associate themselves with, are back in full swing. It is rather difficult to advise strategies how not to use such sentiments, and how not to repeat mistakes of the past. The only advice I would have would be to look at what preceded all the conflicts in different countries in the nineties, how easily it is to move from the political declarations and from hate speech being spread on the media to someone actually taking up arms and trying to act upon such ideas.

EWB: You wrote an article on the connection of Russia with far-right political actors in Slovakia. Do you think that there is kind of similar approach of Russia towards the countries of the Western Balkans?

DM: Definitely. This is the pattern we observe across Central and Eastern Europe, Balkans, but also in the Baltic countries. Russia is trying to use different domestic actors, either fringe political activist, or paramilitary groups to increase its foothold in a particular country. These domestic actors have proven in certain countries to be very effective at creating internal tensions and also driving forward narratives which are sympathetic to the Russian worldview. In some cases, I would not say that it is a direct consequence of open Russian interference, it is rather a coalition – when you have a group of domestic actors with the same worldview and same agendas as Russia has, therefore, they are natural allies on particular issues and topics. Russia is very good at using these loose networks of actors from the political fringes, trying to increase its impact on certain parts of the population.

EWB: Montenegro will join NATO in the next few days. What do you think, what are the consequences of Montenegrin membership in NATO for surrounding countries in the region?

DM: The successful process of integration of Montenegro into NATO would be a signal to other countries in the region that playing with aspirations of closer geopolitical alliance or cooperation with Russia is not really the best solution for their future. If you look at the map of this region, you would see that – with the exception of Serbia and Bosnia and Herzegovina, all the other countries – Macedonia is maybe at the special case because of all the historical reasons – NATO covered all the region. Russians are very much aware of this fact and that is why they tried to use different tools and methods to prevent Montenegro from joining NATO. Serbia made it quite clear that – yes, we want to be part of the EU, but not the part of NATO. There are historical, cultural and even the religious reasons for that, and no one should be really pushed to enter NATO. But, the question is whether increased security or military cooperation with Russia which now seems to be the case in Serbia would actually benefit the Serbian citizens or would rather be source of regional instability. If you look at the map – Serbia is almost surrounded by NATO member countries. In such a situation, is is hosting Russian soldiers and Russian military facilities really the best way how to increase your security?