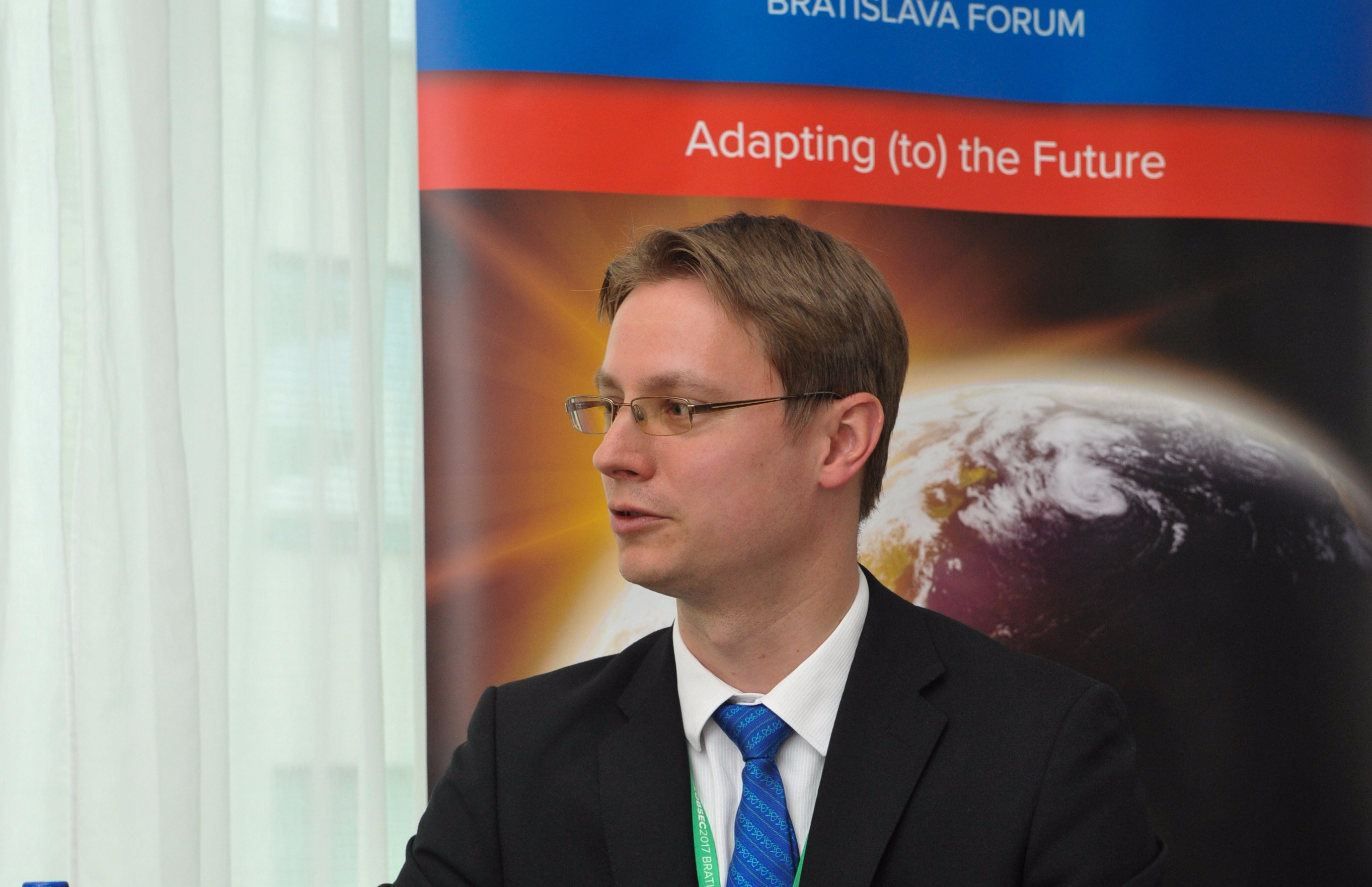 During this year’s GLOBSEC Bratislava Forum, we spoke to Ján Cingel who is a research fellow at the European Neighborhood Programme at GLOBSEC Policy Institute. He also worked as a project manager of the European Neighbourhood Development Programme at GLOBSEC (previously the Slovak Atlantic Commission) for five years. His area of expertise is the Western Balkans, South Caucasus, NATO, and EU integration related issues and processes.

Jan Cingel: Unfortunately, the Western Balkans appeared on the “Europe’s map of problematic hotspots” recently, after a period of time, when it was not so present in the security-related discourse. This is due to the recent developments in Macedonia and Kosovo and what happened in Montenegro last year. These are the challenges which brought the attention of the EU and member countries to the Western Balkans back. The Western Balkans is back on the spotlight and at the same time more attention of the EU and its member countries is needed to help to solve some of these issues.

EWB: Would Montenegrin membership to NATO influence the other countries in the region?

JC: Yes, in a way it influences because it is sending the clear signal that the NATO’s open door policy is still alive as there was some period of time when the NATO was not enlarging. There were some promises made during the previous summits, but  no new membership granted since 2009 when Croatia and Albania were accepted, and at the same time – unfortunately – Macedonia was left behind. Accession of Montenegro is a signal that the NATO wants to expand, that is ready to accept new members and it does not matter how small or how small their armed forces are. It is important that there is still the bond of Transatlantic values and open door for those countries which are interested in NATO membership and are able to deliver on conditions connected with the membership. How will it influence the security of the region or some other countries? Of course, it will have significant impact, because Montenegro will be the last piece of the puzzle on the Adriatic coast, which will become a member country of NATO. It will be another NATO member country neighbouring Serbia and Bosnia and Herzegovina. On one hand, it can be used to help replicate reforms which were done in Montenegro, on the other hand Montenegro could also assist with developing closer ties between the Alliance and BiH, thanks to  the most fresh experience from the integration process. MNE could also help with developing better partnership ties with Serbia – of course only to the extend Serbia is comfortable to do so.

JC: In Serbia’s case, it is quite clear. The Prime Minister and President-elect Aleksandar Vučić mentioned openly that the membership in NATO would increase the security of Serbia, but citizens of Serbia do not wish to become a member of the NATO, so he cannot go against the will of his own citizens. Serbia declared neutrality and it is following that path. In the case of Bosnia and Herzegovina, or even Macedonia, which are candidate countries Montenegro’s membership could help them. For example, Montenegro can share with them the latest experience with the negotiation process, or it can support them diplomatically. It is a small country, but still, it is a country from the region which is a member of the NATO. And at the „NATO’s table”, all the member countries are equal in this respect. From the diplomatic point of view, the voice of Montenegro is as valid as the voice of – let’s say Germany or any other allzy.

EWB: Do you expect speeding up in Macedonian process of integration to NATO after the new government is in place?

JC: This is an external issue, from the Macedonian point of view. Macedonia is well prepared from the military point of view, but the problem is with the so-called “name issue” with its neighbour – Greece. First, the name issue with Greece needs to be solved, the solution needs to be found, and we will see if the new government will have mandate strong enough to push some compromises in this respect. If they will succeed in this, then there is a possibility that the accession process of Macedonia will speed up. The most important stumbling block is the agreement with Greece. Unfortunately, it is the external factor and not the internal one. That does not mean there are not internal political problems in Macedonia, there are plenty and the new Government will have to deliver on quite high expectations of citizens as well as the international community.

EWB: One of the key ongoing processes in the region is Belgrade – Pristina dialogue. What do you expect after the formation of the new Serbian government, and after the new elections in Kosovo, regarding the dialogue? Will it continue normally or do you expect some obstacles in the future, especially because of those nationalistic tensions in the region and possibility of Ramush Haradinaj to become Prime Minister of Kosovo?

JC: The dialogue is now in a complicated phase, because of the external circumstances and also because of the internal politics of the both countries. In Kosovo, the internal problems began a couple of months ago, and the dialogue is now in hibernation. I do not think that there will be any development before the elections in Kosovo before the new government takes the office. The dialogue can continue but it will depend on the new government. On the Serbian side, I do not see any obstacles or any problems. Yes, there will be a new government, but I do not think it will be that problematic as it is in Kosovo’s case. There were nationalistic declarations on both sides recently, but we need to understand it in the framework of the pre-election campaigns.

JC: I do not think it is possible and I think it is not wise to change borders in the Western Balkans. That would be a disastrous thing that could happen, because with that you would open the Pandora box which is a lot bigger than just Serbian-Albanian relations. There are also other countries that could and would be affected. Changing of border on the Western Balkans is also something the international community will not allow. I am reading these declarations as a kind of a pre-election rhetoric, quite typical for the Balkans. Much of this rhetoric is related to one purpose and one purpose only – trying to attract the voters from the right spectrum with more nationalistic narratives, this concerns both Serbia as well as Albania or Kosovo respectively. Serbia reacts very sensitively to the talks about Greater Albania and that is because of recent history and Kosovo. It is quite understandable that their position is to very sensitively monitor the moods of the Albanian side. However, as mentioned before, any changes of borders in the Balkans would have serious security implications for the whole region and more countries would be affected. Too much is in stake therefore I hope and believe, that all those declarations will also stay just at the level of talks only.

EWB: A lot of people say that there is a risk for Bosnia and Herzegovina to become a ‘fail state’ and that it needs the international community to be present for a long time just to keep the country alive. What are your thoughts on BiH regarding the ongoing process in the country?

JC: It is a very difficult question. It seems that there is an ongoing political crisis in Macedonia for over two and a half years. The country needs stability and it needs to find a way ahead towards different goals also in domestic issues, like economy, justice, internal cohesion of the two communities, social affairs etc. In the foreign policy area not only NATO integration but also the EU accession and finding the solution of the name-issue with Greece in the first place, are the challenges lying ahead of the country. I hope that the political crisis in Macedonia will be solved as soon as possible. There is a hope for that with the formation of the new government these days and with the VMRO-DPMNE becoming a constructive opposition. In Kosovo’s case, it is little more complicated because some of the countries that are members of the EU and NATO are not recognising its independence, including Slovakia, therefore joining the NATO might be a lot longer run, than is the case of Macedonia. First of all, there needs to be concluded the so-called process of the normalisation of relations between Belgrade and Priština, realising that it is the condition of all non-recognisers. Once Belgrade and Priština agree on the formula of relations, then these countries can decide whether they will recognise the status quo and will recognise Kosovo. We will wait and see how the Belgrade and Pristina talks will progress, both sides have a lot in stake there and a compromise is needed.

EWB: Stability is one of the most important things currently in the Balkans. It seems that at the first place, the EU officials are neglecting the warnings of NGOs and opposition in the countries of the region that democracy is eroding because of the stability. Do you think that stability has priority over democracy?

JC: It is a philosophical question – what is more important in this region. EU was misreading some of the signals of the crisis at the beginning, and for example in case of Macedonia, they stepped significantly just in mid-2015 after the Kumanovo shooting when the EU was afraid that there might be again blood flowing in the Balkans. Subsequently, they pushed both sides of the political conflict to the Pržino agreement. Then the involvement was needed also as the Pržino was being implemented and finally the early elections organized with significant delays.  It seems that the involvement of the international community is quite important in the Balkans, especially as far as the soft-power such as political and diplomatic pressure is concerned. Maybe in some cases the involvement should have come earlier, and then the impact of the crisis could have been easier to be managed. As for the question of stability vs. democracy – the two need to go hand in hand although sometimes it is not possible. Since there ware number of crisis and even military conflicts in the Western Balkans in the past, I think there is a tendency now to see the priority of the stability over democracy. The international community seems to be preferring stability over some democratic mechanisms in the region, or trying to achieve stability first and only then leaving the space for more democracy.