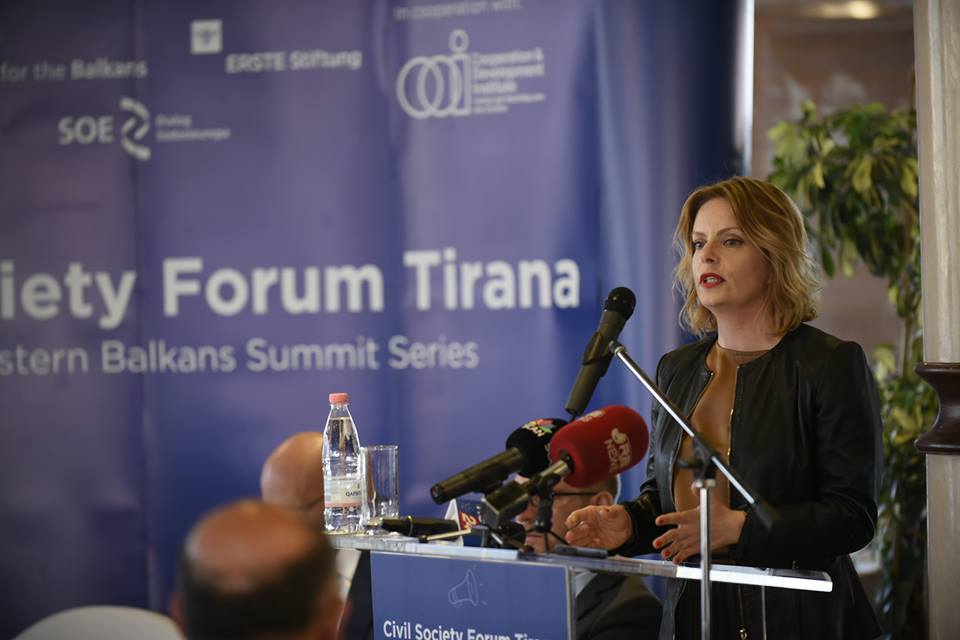 Interview with Hedvig Morvai, Executive Director of the European Fund for the Balkans, one of the key supporters of the Trieste Civil Society Forum, which will be held on 11-12 July.

European Western Balkans: The upcoming Civil Society Forum (CSF) in Trieste represents the third time, after Vienna and Paris, that the CSF is organized within the Western Balkans Summit of the Berlin Process. The European Fund for the Balkans has been one of the driving forces behind the Civil Society Forum series. Do you consider this inclusion of the CSF in the Berlin Process Summits to be a success?

Hedvig Morvai: The inclusion of the Civil Society Forum is rather a necessity than a success, because the sustainability of the Berlin Process – interlinkedness of the Western Balkans and Europeanisation of the region – is not possible if the process is not backed by a wide social consensus. The consensus can be achieved only if the Process in inclusive, which means that the citizens of the region and their organisations are made part of the decision-making and part of the implementation of the Process’ projects and initiatives. Such civil society involvement is made possible through the Civil Society Forum, which provides a unique platform for citizens’ direct participation in the Berlin Process, currently the most important format of the region’s high-level political dialogue with key EU member states.

EWB: How do you see the successes of the Civil Society Forums of the Western Balkans Summit Series so far?

HM: Following the initiative of the civil society, the governments from the region signed the Declaration on bilateral issues in Vienna, in 2015, by which they committed themselves to solving all open issues through negotiations and not to block each other in the process of the European integration. Today, when the projects which are the results of regional cooperation are slowly coming to life, it is clear how important it is. Therefore, this year in Trieste, we will once again invite our officials to reaffirm their commitment to the regional cooperation and joint work in the spirit of the Declaration.

Generally speaking, it is important that through the Civil Society Forum we have managed to establish dialogue with our governments within the framework of the Berlin Process. It was a necessary requirement for the citizens to begin to effectively influence the decisions made in the Process. At this year’s Civil Society Forum we will, through this dialogue, communicate to them the political recommendations regarding the most important challenges that the region is facing.

EWB: What was the logic behind the choice of topics for the Civil Society Forum? Why were topics such as bilateral issues and youth cooperation omitted from the workgroups?

HM: These topics have not been omitted, quite the contrary. Ever since the last year’s Summit, both issues were elaborated through interim meetings of the Civil Society Forum and through follow up communication, and as a result, policy recommendations were prepared and will be presented at the Trieste Summit.

However, we have also focused on the topics of the 2017 Summit as: the rule of law and fight against corruption, environment and climate change, and communications of the Berlin Process in the time of rising populism, to what we added emerging issues that we believe are important as well as media freedoms and the impact of Brexit on the Western Balkan’s European perspective, which will be discussed in the form of workshops during the Forum.

EWB: How do you see the role of the Civil Society Forum for the success of the Berlin Process? Why is the inclusion of the civil society in this political process important?

HM: The Civil Society Forum ensures inclusiveness of the Berlin Process, which is a pre-requisite to its sustainability. This is because without citizens’ involvement there cannot be a social consensus necessary in order to establish a meaningful and irreversible regional cooperation, and to develop the ties between the citizens of the region. It is only when the citizens are part of the decision-making and of the implementation of projects and initiatives agreed on the Summits that they can feel “ownership” of regional cooperation and whole-heartedly support the Europeanisation of the region, which are the ultimate goals of the Berlin Process.

EWB: How would you rate the success of the Berlin Process? Has it lived up to expectations so far?

HM: The expectations of the Berlin Process are high. Currently this is the only high-level political venue that exclusively focuses on the six WB countries. As a result of this involvement of key EU member states, which are included in the Process, important regional initiatives and projects have been launched in order to solve some of the biggest problems faced by the region. Projects such as infrastructure and energy connectivity, more intensive economic cooperation and the establishment of Regional youth cooperation office are important for the future of the region, as they are aimed at permanently connecting people. The success of the Berlin Process is that it encourages solid and lasting regional cooperation that brings long-term stability of the Balkans.

On the other hand, this process has many shortcomings for which concrete results are absent. For example, the implementation of the projects is hampered by the fact that funding instruments cannot be easily redirected to immediately benefit those most in need and affected by the social and economic conditions in the region. That is why the German Foreign Minister announced the so-called “Berlin plus” as an addition to the Berlin Process. Furthermore, the mechanism for monitoring and evaluating the implementation of the projects agreed by the governments has not been developed, and the Summit topics often seemed as if they were chosen ad hoc, and not as a result of a strategy. These and other disadvantages suggest that there is a need for further improvement of the Berlin Process.

EWB: What do you see as the main challenges for inclusion of the civil society in the European integration processes of Western Balkans states? Do you feel that the civil society has been neglected in this regard?

HM: Key obstacle to civic participation in the EU integration is the lack of political culture that would mainstream and foster the inclusion of citizens in what is traditionally seen as “the matters of the states”. The governments of the region should not limit the participation of the civil society to the current formats, mostly related to giving them a symbolic role in accession-related matters. Civic participation should also be made more substantial in regard to implementation of the EU integration-induced reforms, and should mean their active role in the policy cycles at both central and local levels. As per the participation of civil society in the projects and initiatives at the regional level, the actors responsible for various regional cooperation initiatives should do their best to increase the chances for their sustainability through inclusion of the civil sector.

Another daily challenge for greater involvement of the citizens and their organisations in the European integration process, both at the level of the region and at the level of particular countries is an overly technical outlook of the process of EU integration. In order to overcome this, the process of European integration should be “translated” to citizens, so that they understand its relevance to their daily lives. This opens a complex question on how to best communicate the EU and integration-related reforms. A brief answer to that is — through both capacity-building of the civil sector and through strategically planned communications of the main actors involved in the integration process, in the Western Balkans and in the EU.

Future of the Berlin Process