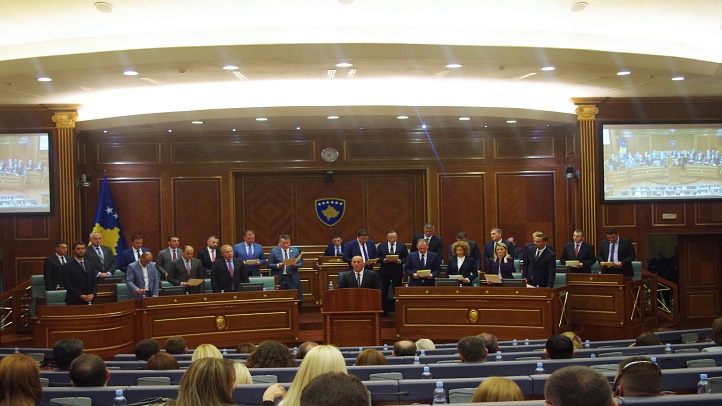 Photo: Assembly of the Republic of Kosovo

BELGRADE – The support that the Serb list gave to Ramush Haradinaj to form a new Government provoked a strong reaction in both Belgrade and Pristina.

In Belgrade it was described as a black day on black pages of Serbian history, whilst in Pristina many blamed Ramush Haradinaj for placing a control over Kosovo Government in the hands of Aleksandar Vučić.

Namely, being elected with a narrow majority of 61 MPs, for every law to be passed Haradinaj is directly dependent on 10 votes that the Serb list has. It indeed gives disproportionate power to the representatives of Serb minority, a fact that creates an uneasy feeling in many, particularly having in mind animosities that still exist between two communities.

Further, it did not go unnoticed in Pristina that the Parliamentary session to vote in Haradinaj’s Government was postponed because the Serb list was late coming from Belgrade where consultations with Aleksandar Vučić were held. Some saw it as a demonstration of power whilst some went one step further describing it as a moment of humiliation.

June elections and inconclusive results showed a deep polarisation of Kosovo political scene and irreconcilable divisions between PAN coalition and Vetevendosje. Yet, having in mind that PAN won most votes they had a right to appoint a parliamentary speaker that opens the way to establishing the new government, however due to the lack of MP votes they failed four times to do so. At the same time, the official position of the Serb List was that they will not block forming of the institutions, refusing to give a clear answer whether they are willing to support Haradinaj or not.

Ultimately the support (un)surprisingly came and the Serb list was rewarded with three ministries (one more than they previously had) and with six posts of state secretary, which is more than what the Constitution requires. One would say that Serb community is perfectly integrated in Kosovo society, but that would be far from the truth.

In reality, the Serb list (supported by Belgrade and without any ideology) is playing by the Kosovo rules. This Government is depicted as a shareholder company due to the large number of ministries (21) for a country that has less than 2 million people. So, for example, New Kosovo Alliance (AKR) with only four MPs was rewarded with four ministries. It means that politics in Kosovo works on a basis of clientelist networks where every rule and every law can be subverted for the benefit of a patron, that is PAN leaders. And with the prospect of being indicted by the newly established Special Court, they needed to be in power in order to avoid a potential extradition to the Hague.

It is very unlikely that the participation of the Serb List in the Government will significantly improve the position of Kosovo Serbs. But will the Serb list (or Belgrade) obstruct the work of the Government that many are afraid of? Also very unlikely. Surely there are some questions, such as establishment of Kosovo Army, that can provoke a Belgrade reaction and lead to disagreement and potential conflict between Government members. Yet, Kosovo has much more crucial issues to deal with, such as widespread corruption, dysfunctional institution and a lack of economic development. The capacity of this Government to successfully tackle those issues is another question, but the Serb List cannot be blamed for PAN coming into power.