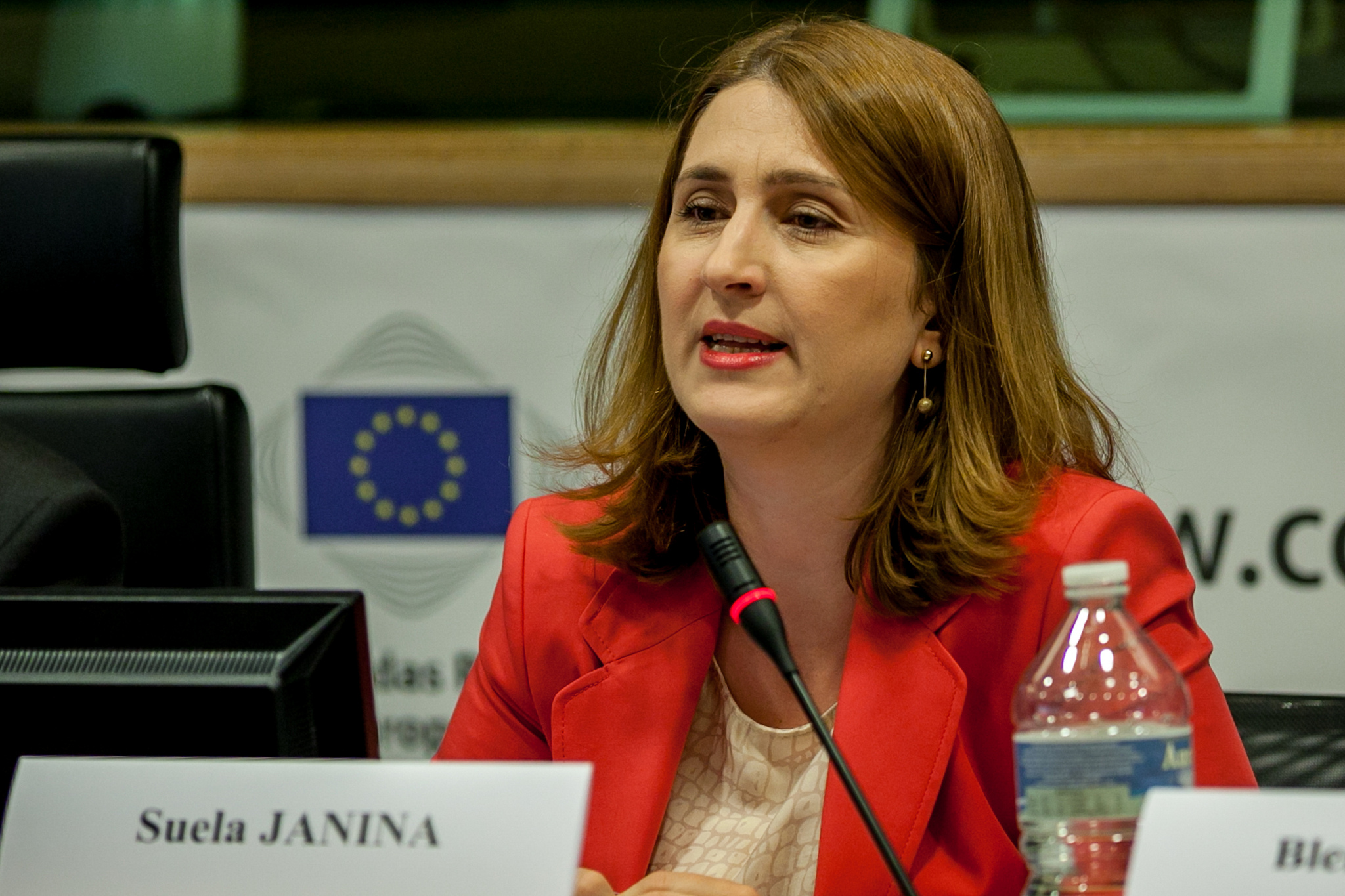 The European Western Balkans conducted an interview with H.E. Suela Janina, Ambassador of the Mission of the Republic of Albania to European Union.

European Western Balkans: How do you comment on the newly endorsed Enlargement Strategy and how do you see the widespread optimism among the EU officials from a perspective of Albania?

Suela Janina: In Albania, we have welcomed the European Commission Strategy and appreciated its approach in offering a credible enlargement perspective to all the countries of the Western Balkans. In particular, we are pleased to note the positive assessment of the European Commission on the significant progress Albania is making in its European path and the Commission’s readiness to recommend opening of accession negotiations with Albania on the basis of the fulfilled conditions. As referred in the days following its publication and more recently during the visit of President Juncker, in Tirana on 25 February, for us the strategy presents a clear signal on the revival of the EU commitments in our region, as well as a motivation to pursue the reforms in order to move further on our path of European integration.

More than commenting, time is now to address without delay the actions to implement the strategy and its six flagship initiatives and more concretely, to work towards the action plan in support of the transformation of the Western Balkans. We expect the Commission to take the lead and coordinate the implementation of the action plan, being from our side engaged to deliver real and sustained reforms in these areas of strong mutual interest.

EWB: Almost 15 years after the Summit in Thessaloniki, Bulgaria organizes another EU-Western Balkans Summit in Sofia. What do you expect to be the major outcomes of the upcoming Summit and how will it affect the accession processes of the respective countries?

SJ: The renewed momentum created by recent and ongoing events and initiatives such as the State of the Union speech and the first visit of President Juncker in our region, the continuous engagement of HRVP Mogherini in the Western Balkans, the February strategy of the Commission, Bulgarian EU Presidency putting Western Balkans as a key priority, April enlargement package, altogether create an important window of opportunity for our region.

We expect from Sofia Summit to keep open this window and to leave an important legacy that would shape an enhanced commitment to a credible perspective for our region. The Thessaloniki Summit will be remembered for having confirmed the EU accession perspective for the countries of the region and projecting the future of the Western Balkans within the EU. How the Sofia Summit will be remembered, it will depend mostly on the ambition of Member States to project a not too distant future of the EU with the Western Balkans as an integral part of it. We hope the Summit in Sofia will be able to provide guidance for the years ahead, during which we expect a more structured EU engagement in the Western Balkans in institutional, common foreign and security, technical and financial terms, that will make the prospect of enlarging the Union with new members a real opportunity.

EWB:  What do you consider to be major challenges and impediments on Albania’s path towards the EU?

SJ: We are clear that there is no other alternative to the country’s membership to EU. This is one way road, towards meeting the membership conditions, which per se are not only formal criteria, but coincide with the interests and demands of our citizens for consolidating a society based on the rule of law, fundamental rights, good governance and developed economy. I do not think that Albania has any specific obstacle in its EU path, we do not have unresolved bilateral issues or consequences of past ethnic conflicts, which some countries still need to tackle.

True, we have similar challenges that other countries in our region may face, mainly in the abovementioned fields, and coping with the resistance to real reforming is one of the most persistent one. In our case, significant progress has been made, but still there is much to be done over the next years.

EWB: European Commission has revealed its intention to recommend the Member States to launch accession negotiations with Albania, indicating that this might happen in Summer. And indeed, Albania has made significant progress in fighting organized crime, the vetting process and judiciary since the EC’s recommendation of 2016, which was, on the contrary, not backed by Germany. Do you think that the Member States share the same optimism and that the accession negotiations will start in 2018?

SJ: Let me make a clarification to your question. On November 2016, the Commission recognized the steady progress in all the five priorities required for the opening of accession negotiations and recommended opening of accession negotiations with Albania, subject of credible and tangible progress in the implementation of the justice reform, in particular the re-evaluation of judges and prosecutors. The Commission’s recommendation and assessment on Albania has been backed by all Member States. The Council in 2016 took positive note of the Commission’s recommendation and encouraged Albania to continue work and consolidate the achievements. Today, more than one year after, we ask for opening of accession talks based on concrete advancements in the justice reform, fight against organized crime and corruption, with a distinct clarity in our commitment to yielding the sustainable results from the reforms which will ultimately help us moving to the next step of our path to the EU.

Albania expects the opening of its accession negotiations with the EU within this year. We hope to receive an unconditional recommendation to open accession talks in the April report of the European Commission, and we look to the EU Council in June to adopt a decision to open negotiations.

I believe that this expectation is not raised unfoundedly. As a candidate country from 2014, Albania has embarked with decisive force on the reforms on the rule of law, fundamental rights and good governance, as well as on an ambitious economic reform. We share on regular basis the developments related to the reform process with EU institutions and Member States and enjoy their valuable support not only in terms of encouragement, but with concrete cooperation in the most important challenges we face, such as justice reform, fight against organized crime and actions against irregular migration.

We understand that the EU expects concrete results from us and that the process of assessing these results will be tough but fair. By the European Council meeting in June, I hope we will be able to make our case, convince our partners in the EU that what we are looking for is not shortcuts or awards, but a way towards a deserved decision to advance to formal negotiations, which will serve as an important catalyst to accelerate reforms in the country and make the perspective of accession a reality which is transmitted more than a dream to our citizens.

EWB: Albania is one of the countries in the Western Balkans whose vast majority of citizens has so far been quite supportive to the country’s accession to the EU, unlike some other countries in the region. Do you expect such a positive attitude towards the EU to remain despite the fact that the integration process proceeds at a slow pace?

SJ: Accession to EU is an aspiration of the Albanian people and a national objective that presents no division among the entire social and political spectrum in our country, a consensus that hardly can be found elsewhere. I expect this to be the same until the day we rejoin the European family when we feel we belong not only geographically, historically, culturally, but also where we are ready to share the challenges of the present and more, the common future together. Assuredly, being for long in the waiting room is not a comfortable option for our future.

As for us, our position is clear and sound: there is no doubt on our strategic orientation to joining the EU and our commitment to deliver this target in practice, sooner rather than later. We are aware that the way ahead is demanding and challenging, but we are determined to turn this opportunity into reality for the Albanian people. Opening of accession talks with Albania would be not only a positive message to our citizens, but also to the entire region, that time to turn words to actions, from both sides, is now.

[EWB Interview] Aslan: Franco-German axis to be renewed, enlargement not a priority

Spot the difference – Kosovo at an early stage