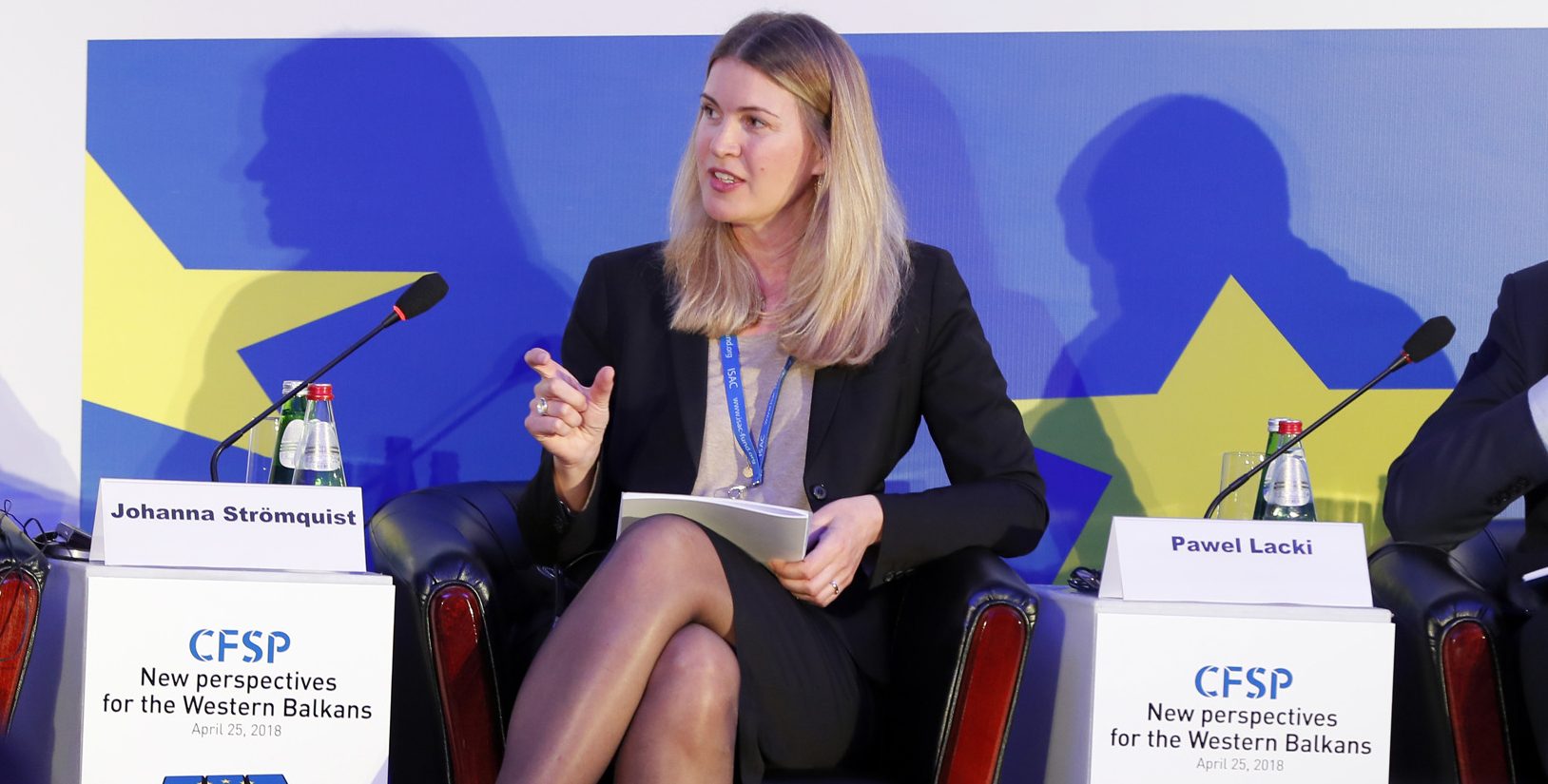 Interview with Johanna Strömquist, Head of the department for Southeast Europe and EU enlargement in the Ministry of Foreign Affairs of Sweden. Strömquist was a speaker at the conference CFSP: New Perspective for the Western Balkans, organized on 25 April in Belgrade by the ISAC Fund.

Johanna Strömquist: Sweden supports continued EU accession of countries in the region and we think it is in both the interest of the countries in the region and the EU and its member states that Western Balkans continues on its EU accession and integration path. The EU accession has proven to be one of the strongest drivers for economic development, stability and peace, and we think this is why we all have a common interest to continue.

EWB: What are the priorities of Sweden in this process? Is there anything specific Sweden will insist on when it comes to the accession of these states?

JS: We agree with the Commission’s approach, that has become the EU’s approach, to put fundamentals first. So the focus on rule of law is very important, because it is shown that rule of law is, of course, fundamental for a functioning state, and also what is needed to have economic development. For example, foreign investors will always look if the country has a functioning rule of law system, so that is, of course, very important priority also to Sweden.

EWB: What you see as the main obstacles or threats to this process? Is it perhaps the lack of rule of law, or the so-called “stabilitocracy” – which is now on everyone’s lips – or there is more like an external threat from other actors?

JS: I think there are always both internal and external threats in this kind of processes. One, very internal process is also between the countries in the region. Then, not to have sufficient support from the population, and also for the governments not to dedicate enough time to these, sometimes difficult reforms. Then, of course, you can also see some member states that perhaps for their own domestic reasons being reluctant to take in new members. But there are also external actors in the region, that perhaps have interest in the region not moving closer to the EU.

EWB: What is your opinion about the European Commission’s Strategy, is it going to significantly change the EU’s approach, is it a step in the right direction?

JS: It is definitely a step in right direction. We think this is a sign of renewed energy and focus of the EU for the region. I think it is the way to show that irrespectively of how quickly the countries of the region can become members of the EU, we are interlinked and need to work together. This is also the way to strengthen the relationships already now in all areas of common interests from the economy and connectivity to combating organised crime and terrorism. I think this is a sign of a very special status of the Western Balkans for the European Union, and it would also make it easier for the countries to become members.

JS: I think it is a natural consequence of a lesson learned from previous enlargements. We still have a border dispute between Croatia and Slovenia and the EU does not want to import any more disputes into the Union. We cannot afford to have unsolved disputes within the EU, so I think this is the background for the EU highlighting the need to have normalization between Belgrade and Pristina for EU accession.

EWB: One of the problems Western Balkan countries face is that their foreign policy is not aligned with the EU foreign policy, and in Serbia the alignment is even dropping. Serbian officials say that this is not a big problem since it is important that the foreign policy is aligned at the end of the negotiation process. What is your opinion about this, does it present an obstacle at the moment?

JS: I think it presents an obstacle in the sense that the EU is a strong international actor that can make united and unanimous decisions, and all foreign policy decisions are always unanimous. If a country that says it wants to join the EU cannot align with our common foreign and security policy, this sends a message that creates doubt in the EU about where this country will position itself once it becomes a member. So I think it can be counterproductive for the countries that are not aligning with common foreign and security policy, because it will not help them gain support within the EU for their membership. So for us, it is clear that this should be done rather sooner than later.