“The new government has shown commitment and political will to advance the EU reform agenda”.

This is not a sentence from this year’s report on Montenegro, but the encouragement used by the European Commission for North Macedonia when the country exited political crisis in 2017 and formed the new government after the lengthy rule of VMRO-DPMNE.

Why it was missed to characterize the first year of the first government formed without participation of Democratic Party of Socialists (DPS) in Montenegro, there are multiple reasons. One of them precedes the ongoing transition: unlike in North Macedonia, the EU has never fully acknowledged the state capture in Montenegro during the three decades of rule of the DPS. The others, however, are namely the accountability of the new power structures.

Despite the repetitive assessments in many areas, the European Commission’s report on Montenegro hinted at the country’s shaky transition from rule of one predominant party to the new “polycentric” rule of heterogenous parliamentary majority and the non-party Government.

This time last year, the new parliamentary majority had at least one reason to be relaxed. All the wrongdoings of their opponents and prevailing corruption were something they could not be held accountable for, although they pledged to put an end to it.

A year later, they are trying to find scapegoats among themselves for the absence of tangible results and political will, while wasting much more energy on the so-called identity issues of nation and religion. The truth is, the results they are supposed to deliver do not bear ideological stamps or ethnic affiliation, and they are largely missing: the progress over the last year in even 30 out of 33 negotiation chapters have been assessed as limited.

Key posts in the judiciary remain vacant and adoption of anti-corruption laws is on hold. Political parties have not demonstrated the maturity to achieve consensus on key issues, including effective implementation of amendments to the law on state prosecution and top judiciary appointments.

The largest constituents of the parliamentary majority (Democratic Front) and opposition (DPS) have both sporadically engaged in a boycott of  Parliament. All of this had been rightfully noted in the European Commission´s long-awaited assessment.

One of the positive sidenotes in the report is international police cooperation and un-precented drug seizures, which comes as no surprise given the fact that in August 2021, police seized more than one ton of cocaine near Podgorica, in the largest seizure in the country’s history. On the other hand, the report notes that incidents of ethnically and religiously motivated attacks, hate crimes and hate speech continued to rise. It also recognizes the increase of nationalist rhetoric, which marred bilateral relations with Serbia. The complex relationship between Serbian and Montenegrin official power structures is well captured by the mere reminder that both countries are represented at that level by Chargés d’affaires.

The report has June 2021 as a cut-off date, which is the reason why it did not encompass the events which raised most of the attention in the recent period, including the enthronement of the Metropolitan of Montenegro and the Littoral Joanikije, one of the leaders of Serbian Orthodox Church, in the country’s old royal capital of Cetinje. Unlike UK and U.S. ambassadors who praised the police for efforts to strike the right balance of civil liberties and public safety, the key EU representatives have so far not directly commented the institutional response during the events surrounding the enthronement and their aftermath.

Although in some places the report includes references to events after June 2021, the European Commission potentially refrained from assessing the enthronement due to the pending reports and decisions by competent Montenegrin authorities on the events surrounding it.

Although it is accompanied by the strong political messages of EU officials for the need of reaching political consensus on key reforms, the wording of the report and its focus has remained technical. In general, it could benefit from better transparency of sources and of the consultation processes which guided its preparation, at least to the extent employed by European Commission in preparation of similar reports for the EU member states (e.g. Rule of Law Report).

The assessment of the so-called fundamentals has indeed been more thorough, but the overall weight of detected problems and proposed recommendations remains inconclusive and thus prone to multiple interpretations from different actors for substantiating their own claims and priorities. But such shortcomings are only for the mal-intentioned use; if there are good intentions to finally embark on decisive reforms, this report provides just enough material as a starting point.

Key findings of the 2022 European Commission Report on Serbia

Mogherini: What happened on Monday must not happen again 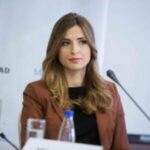 Researcher at the Podgorica-based think tank Institute Alternative and Member of the Balkans in Europe Policy Advisory Group (BiEPAG).