Bosnia and Herzegovina (BiH) is bordering with the European Union’s (EU) latest member but has never been more distant from the EU. Country needs structural reforms! For someone living in BiH those words have become part of everyday life. However, few things have changed and even fewer are on the agenda of the policy makers in the country. Why is this the case?

Economically, country’s transition process and integrations reforms are far from being successful. Even before the outbreak of COVID-19 pandemic country’s growth rates were much lower compared to other transition countries. Combined with low FDI, long and complicated procedures for opening a business among other, only limited progress is visible. EU integrations were declared country’s „strategic goal“ but lack of readiness for serious action was dominating the process since its beginnings. All of these were put aside since the outbreak of corona virus.

Politically wise, the last two years were the most turbulent since the end of the war in 1995. Everything started with high corruption affair, followed by Mr Dodik’s attack on one of the most important institutions, the Central Bank of BiH, questioning its Currency board arrangement and attacking country’s monetary policy. Very brief periods of on and off attacks followed, culminating with the withdrawal from the state institutions after the High Representative Valentin Inzko, used his power to impose amendments to the country’s criminal law to ban the denial of genocide and the glorification of war criminals.

Due to continued boycott of central institutions and threats of secession of Republika Srpska, at the beginning of January 2022 U.S. Department of the Treasury’s Office of Foreign Assets Control imposed the set of new sanctions upon Milorad Dodik as well as one entity under his control, Alternativna Televizija d.o.o. Banja Luka, in response to Dodik’s corrupt activities and continued threats to the stability and territorial integrity of BiH. EU is also threatening with set of sanctions to Bosnian Serb leaders, however lack of clear EU approach towards this issue is missing and still lacking actions.

It was announced that the European Commission (EC) will stop 125 million euros of financial assistancewhich is part of the financial package from December 2020 aiming to help BiH fight the pandemic.

These events are seriously shaping the future of Bosnia and Herzegovina!

The “ideals” of European democracy

At the end of 2019 the EU has announced the launch of the Conference on the Future of Europe (CoFoE) aiming to discuss and reflect the future of EU and the reforms that should be made at institutional and policy levels. The goal was also to involve citizens, civil society and youth as equal partners in the process.  In light of this, we have asked BiH’s youth about their visions of European democracy and how do they view their contribution to European democracy today.

The multilevel complexity of BiH’s society leaves very limited space for discussing country’s European future. But also of those who are the future, BiH’ youth. European society and its democratic principles are still viewed as free, offering equal opportunities to everyone, more jobs and better education. Basically, “everything the BiH society is not” as one of the participants points out.

Under the Dayton Peace Agreement, only those belonging to one of the three constituent peoples of Bosnia and Herzegovina—Bosniaks, Croats or Serbs—are permitted to stand for election to the House of Peoples and for the country’s Presidency. This discriminates members of the 14 other national minorities in the country. And it is not a surprise that the European Court of Human Rights in the Sejdic Finci case found this to be a discrimination in December 2009. Twelve years later, no changed has been made to country’s constitution and the electoral law. Also, since the state level institutions are blocked, some also argue that without a state budget election planned for October 2022 are under serious threat.

Participation and voting are key tools of democratic process and these should not be questioned! One has to acknowledge the current threats to democracy on both fronts, EU and BiH. Both need more youth involvement, more civil society and both are dying for reforms that will bring modernization, transparency and inclusion. Young people and civil society are key to the narrative shift. Civil society seems lost and needs more organization and action, meaning putting pressure in very focused and coherent way, when needed.

Should I stay or should I go?

When asked how you see your future in EU, one participant immediately answered „in Germany“!

Global Competitiveness Report has ranked BiH, Croatia, North Macedonia and Serbia at the top of the list of countries with the biggest brain drain.  Some estimates show that BiH has lost around 400 000 persons (13%) in the period 2011–19. The reasons for these devastating results are numerous and are not only economic: Corruption and merit-based appointment, lack of rule of law and lack of perspective are found to be the key reasons.

Youth feels stuck in the vicious circle of low motivation and lack of perspective for better future. This situation will continue as long as the poor democratic and economic conditions persist not only in BiH but regionally. 2022 is the European Year of Youth and we should make their voices heard!

Who is to blame and what can we do?

The opening up of the EU is needed. Western Balkans is not the EU suburbs and should not be treated as such. The shift in the narrative of EU – Western Balkans relations is long waited.

This shift needs to be seen from the direction of delayed accession process to more inclusive approaches that will gather all stakeholders, focusing on more civil society participation and more private-sector engagement. Gathering around common issues and values such and green, digital transition, trade, cooperation, more investment are the right tools to fight the enlargement fatigue. As one of participant pointed out “…we need a French revolution!” A French revolution in terms of gathering around the common values and interests.

Nothing that BiH needs to do can be done by the country alone. Highly present hate speech, genocide denial and glorification of war criminals must stop at once. Implementation of European courts and fully functioning reform of the electoral law have to be completed in order to eliminate discrimination of BiH’s citizens. International community and EU in particular have to put aside their differences and act together to stop violence, protect human rights, democracy, and hatred. Neighbouring countries need to support BiH’s sovereignty, laws and democratic initiatives and not to slow them down or event obstruct them. This is urgent!

This article is a part of the project is funded by the European Fund for the Balkans (EFB), and it is part of the activities in the frames of the BeeEFB Alumni Network.

Lajčák and Escobar: All agreed between Belgrade and Pristina must be implemented

Name deal, EU, NATO, and Russian meddling: Will “North Macedonia” get past Russia?

EU EOM: Kosovo elections were transparent, but the vote-counting process is vulnerable 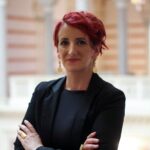