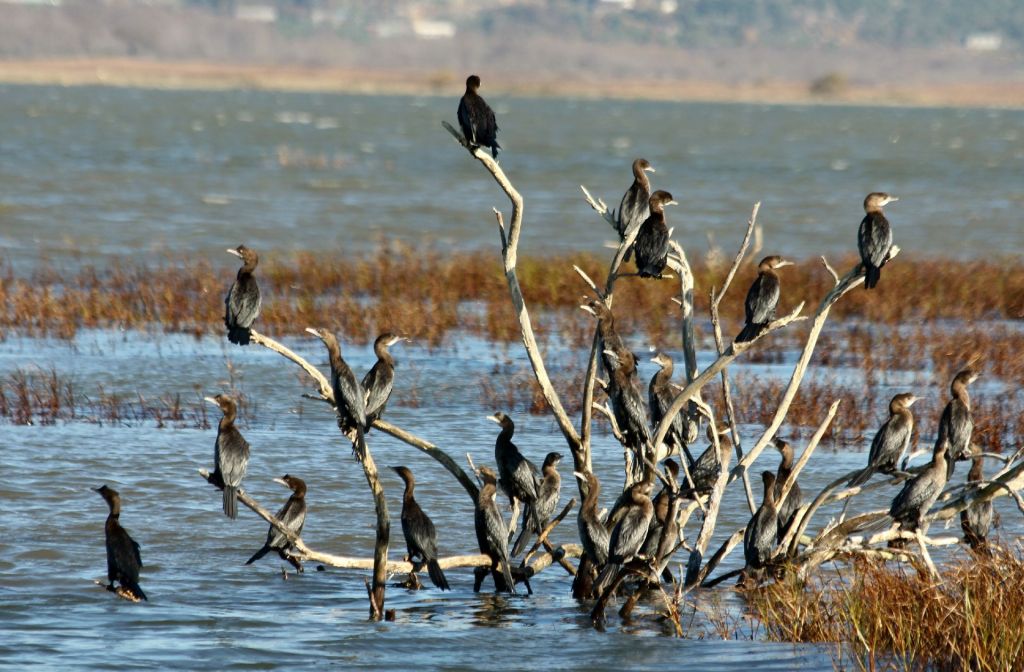 After the bankruptcy of the Ulcinj saline, which represents one of the most important nesting grounds for birds in the Mediterranean, the company stopped pumping out fresh and pumping in salt water, and with it, the food for the birds. This endangered the migration of more than 250 species out of about 500 birds registered in Europe. If the pumps for pumping the salt water into the pools of Ulcinj saline are not started soon, and if the food is not provided to the birds and the area declared as protected area and hunting prohibited, biodiversity will be destroyed. Also, that could jeopardise negotiations between EU and Montenegro.

Even though Montenegrin civil sector warned about the gravity of the problem in Saline, Montenegrin authorities reacted only after a dramatic warning from ambassadors of France, Germany and Poland – Veronica Brumo, Gudrun Stainaker and Grażyna Sikorska. This was the first occasion on which EU representatives used a specific example to drive home the importance of preserving the environment. They requested urgent revival of biodiversity, which requires the Ulcinj saline to be put back into operation. They warned that the situation must be regulated so that the current state of affairs would not jeopardise international reputation of Montenegro and its accession negotiations with the EU. They submitted a letter to the Council of Europe and European Parliament in which they warn that it is the obligation of Government to protect the area of the Saline. The basis for that can be found in the Convention of Berne, Bonn and Ramsar, to which Montenegro is a party. Similar obligations stem from EU 2000 Natura Programme, and are part of the negotiation process in Chapter 27 – Environment.

Ulcinj Saline is an artificial ecosystem and serves as a nesting ground for a great number of birds, as well as several endangered species of fish, amphibians and reptiles. In 2003, Saline was acquired by Eurofond, backed by businessman Veselin Barović who is close to Prime Minister Milo Đukanović.

The Saline started bankruptcy procedures in 2005 due to a EUR 13.000 debt, and in 2011 it experienced insolvency and bankruptcy. The Saline was constructed in 1934, on the location of a former lagoon Zoganj mud, which was drained and turned to salt water pools. Its surface covers an area of 1.468 hectares. Out of 500 species of European birds, 250 have been registered in the area of Saline. Saline is in a “sandwich” of most significant ornithological sites in the Adriatic, even wider. Additionally, the Ulcinj saline is one of the ten largest and one of the youngest salines in the Mediterranean. Two years ago a decision was made to prevent the transformation of this area into an urban plot, which appeared to have been the initial intention of Eurofond. Meantime, the land occupied by the Saline was unsuccessfully advertised for sale eleven times. The price of the entire property was valued at 179 million EUR. Another problem obstructing the return to the pumping is the ongoing dispute between the state and the owners of Saline, who demand the state to recognise their full ownership of the property or pay them EUR 200 million.

In a letter to Prime Minister Đukanović in April, Anneliese Dodds, member of European Parliament and Head of Parliamentary committee for Stabilisation and Association (SAPC), urged the Government to come up with the best solution for the Saline. An EP Delegation, including Dodds, paid a visit to Saline and organised a meeting with the president of the municipality, trade unions, ministry representatives, bankruptcy management, NGOs. “Despite our expectation to meet the minister or his deputy, we were only med by low ranking officials of the Ministry of sustainable development and tourism (MSDT), who were not able to explain how the resources allocated by the Government will be used – who will start the works, in what manner and when. We understand that urgent steps are needed in order to rebuild pump stations which would direct sea water to Saline. If this is not done during the next few weeks, the birds will lose this year for reproduction and many of them will die. We urge You to intervene, so that we don’t lose time”, Dodds pointed out in her letter to Montenegrin Prime Minister.

Following the urgings from EP and ambassadors, the authorities took immediate steps. Daliborka Pejović, state secretary of MSDT, announced that the Ministry is preparing information on the necessary EUR 165.000 that would be used for the reparation of pumps and pumping of fresh and salt water into pools.

Ivana Vojinović, deputy minister of sustainable development and tourism and head of the Working group for chapter 27, told European pulse that MSDT secured EUR 60.000 for the reparation of pumps, with support of UNDP and the Commercial court, in line with the conclusions of the international conference: “In a government meeting organised on 28 May 2015, the Government decided to allocate additional 80,000 EUR for the renewal of infrastructure in Saline”, she clarified. Municipality of Ulcinj announced it would with a voluntary action to clean the channels needed to pump the salt water into the Saline pools on 5 June, the World day of the protection of environment. The action will be organised in cooperation with MSDT, Centre for protection and research of birds (CZIP) and Centre for sustainable development.

However, Darko Saveljić, ornithologist and executive director of Centre for protection and research on birds (CZIP), stressed that regardless of the good news, the state of Saline is chaotic and extremely difficult for the birds: “Many pools are without water and 300 pairs of flamingos, who started nesting, were forced to seek other habitats. Many other species were also forced to nest in empty pools which exposed them to predators”, Saveljić told European pulse. Saveljić said that the state received warnings on the need to protect the biodiversity of Saline since 1999, that nine years later a plan was made to manage the Saline, and in 2011, a study which emphasised the protection of the environment. He said that “It was all shelved. The State assumed the obligation in 2012 of declaring it a monument of nature. Today, Saline presents a great problem, and its existence depends on our consciousness and conscience”.

Saveljić added that the Managing board of Saline declared the area first a private park of nature in Montenegro in 2004, and a year later it banned hunting and fishing in that area by a special decision. “Contrary to the vision of the current management, Ministry of agriculture adopted a controversial decision in 2010 which again approved hunting in one part of the Saline, thereby ignoring the decision of the management as a legal subject, a decision which is moreover in line with the public interest of Montenegrin citizens and international community”, he said.

Saveljić added that nobody reacted because of the catastrophic situation in Saline, until CZIP urged EC, Bird Life International and secretariats of conventions to which Montenegro is a signatory to react. Saveljić reminded that CZIP pointed out that pumps need to be opened so that the ecosystem on the eastern shore of the Adriatic could be maintained, protecting migration f more than million birds flies in spring and autumn: “Saline ceased its work last year and all vital objects for the pumping of water were destroyed, even though the appointed bankruptcy management was under a legal and criminal obligation to preserve them”.

Saveljić emphasised that it is important to make the destroyed pumps functional in order to pump out rainwater and pump in salt water and with it the food for birds. “We expect that these pumps are made functional and ecosystem is maintained in line with previous 80-year practice. If that is not done by mid June, the area will turn into a desert, and thereby cease to service millions of migrant birds. Ecological damage caused will be immeasurable and it will inevitably lead to a turbulent international reaction. We hope for a final attempt at protection, as envisaged by the spatial plans”, Saveljić said.

Vojinović pointed out that the process of revision is currently taking place at the Agency for the protection of environment regarding the Study on protection of Saline, which will define precise borders, the concept of protection, improvement, sustainable development, as well as the way to manage this area, considering the owner’s rights and existing economic activities. She said the study will provide a proposal for the management of this protected natural property, and identify the possible resources necessary for maintaining protection. Vojinović said that in the meantime, all activities undertaken for the protection of Ulcinj Saline seek to establish such conditions that will protect biodiversity in present circumstances.

This article was originally published in the European Pulse, issued by Center for Civic Education. Original article you can take a look here.