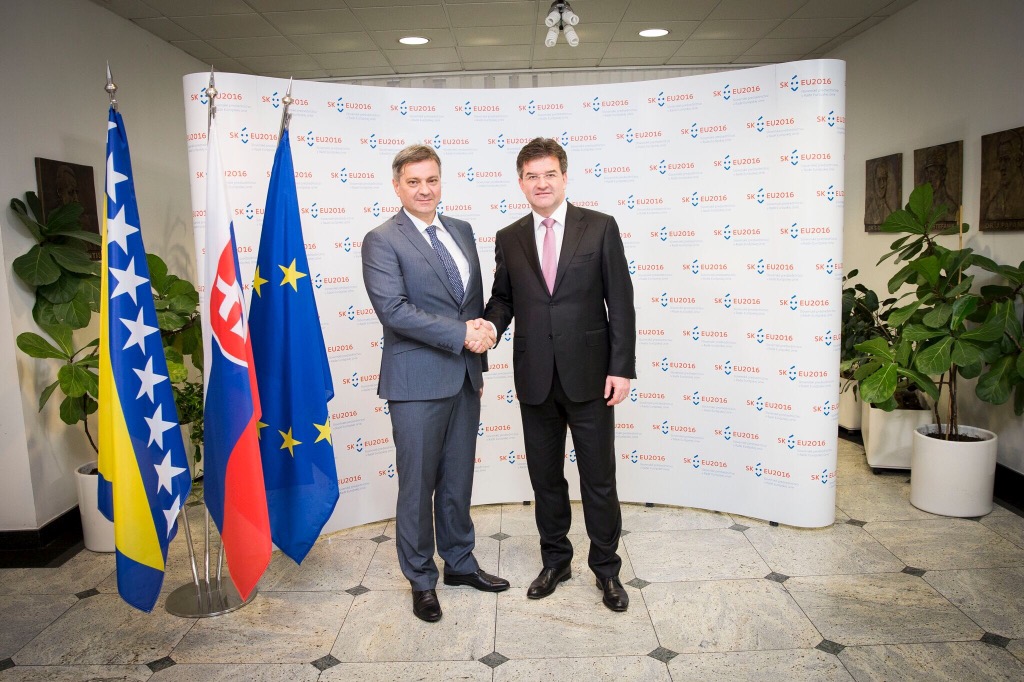 Slovak Republic is ahead of taking over the Precidency of the European Union, and BiH is hoping to get the EU questionaire, so they discussed the priorities of the Slovak Republic’s Presidency of EU, and in that context, on requirements BiH needs to comply with, in order to get the questionnaire.

Minister Lajčak informed Chairman Zvizdić of four priority topics to be at the focus of the six-month Presidency of the Slovak Republic over the European Union, namely, the improvement of economic-financial cooperation with the EU; strengthening of the common market, with an especial emphasis on digital and energy markets; sustainable migration policy; and the EU as a global stakeholder, with an accent to maintenance and fostering of the enlargement policy. He stressed that during the presidency, Slovakia wants to make a progress in approximation to the EU on the part of BiH, Serbia and Montenegro.

Minister Lajčak said BiH has to meet agreed-to requirements for receiving the questionnaire, and that there is a chance for that to take place at the EU Foreign Affairs Council this July. He said he would like wished BIH to begin an official process of getting the candidate status.

Chairman Zvizdić said BiH is opted to continue the lunched reform process, and that it works on implementation of agreed-to aims. He said the Coordination Mechanism text is almost finalised, adding that the Council of Minister of BiH adopted a report on completion of negotiations on the SAA adaptation, now pending a confirmation of the Presidency of BiIH. He said that the recovery of BIH is important, primarily for its citizens, and it shows, the seriousness about the road to the EU, as well.

He stressed that in the overall efforts on this road the key factor is not a declarative commitment, but a real dedication of Bosnia and Herzegovina to the European Integrations process. He noted many documents adopted, preceding the filling for application, including the documents relevant for the up-coming EU Foreign Affairs Council session.

They also discussed the fulfilment of conditions for MAP activation ahead of Warsaw NATO Summit.

The meeting was attended by Director f the Directorate for European Integrations of BIH Edin Dilberović, BIH Ambassador in the Czech Republic Danka Savić, and Ambassador of the Slovak Republic in BIH Jan Pšenica.