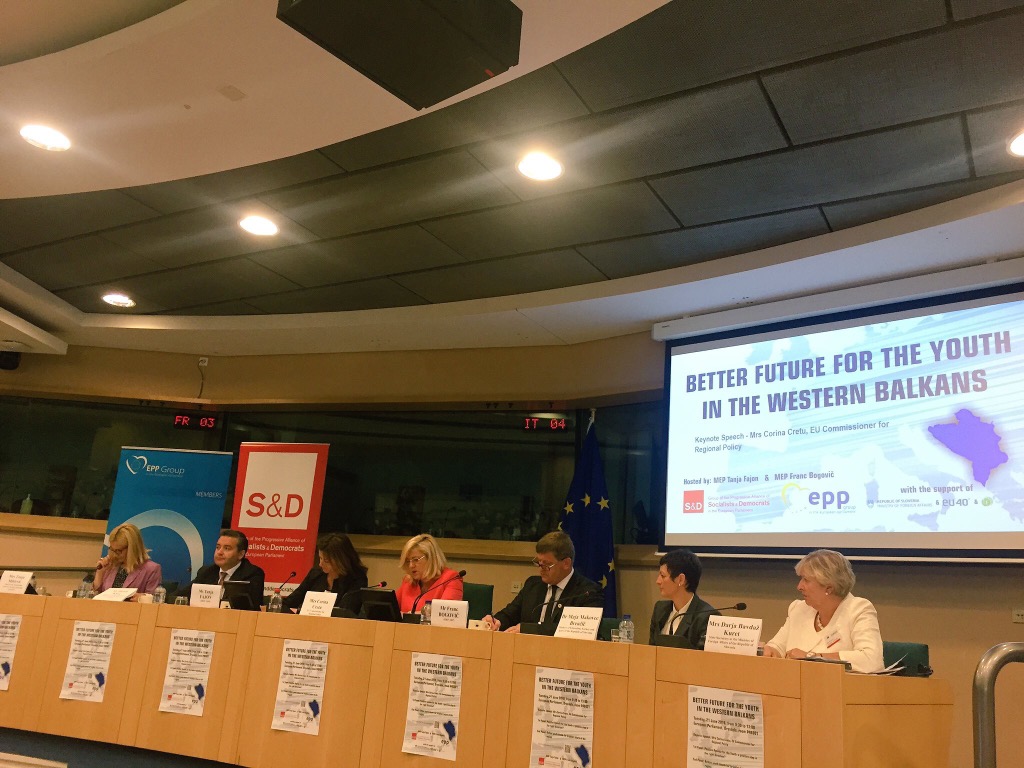 BRUSSELS – With today’s conference ‘Better future for the youth in the Western Balkans’ – organized with the support of the Slovenian Ministry for Foreign Affairs – Slovenian members of the European Parliament Tanja Fajon (S&D) and Franc Bogovič (EPP) stressed the importance of ensuring a better perspective for the region’s youth. »Slovenian efforts to promote the EU future for the Western Balkans youth are very welcome and more than 150 participants at today’s conference only confirm this,« two MEPs emphasized in a crowded room in the European Parliament.

MEP Franc Bogovič (EPP) expressed his firm support of the EU enlargement to the Western Balkans which is, also in terms of geography, part of Europe. »It is crucial to boost economic development in the region, meaning more jobs for young people, and to promote reforms needed for a gradual implementation of EU standards. This is why I call on the European Commission to introduce a cohesion policy with more EU funds for the Western Balkans countries,« added MEP Bogovič, who is convinced that we have to deliver a more tangible European perspective to the Western Balkans’ youth through concrete projects and visible results.

MEP Tanja Fajon emphasized that the EU already has a series of programs designed for youth which should be explored, additionally prepared and better used. »I call on the leaders in the Western Balkans to enable more favourable conditions for the young, otherwise massive and worrying brain drain of a generation which should be the motor of society’s progress will never stop. I strongly welcome the introduction of the Regional Youth Cooperation Office (RYCO) of the Western Balkans and I hope it will be successfully promoting reconciliation through cooperation and exchange. In light of this, I also expect the next Berlin process Summit in July to be concluded with more concrete proposals in this direction, which will be gladly supported in Slovenia and in the European Parliament,” Fajon concluded.

The conference was opened by a keynote speech by the EU Commissioner for Regional Policy Corina Cretu, followed by two panels at which Slovenian Minister for Education, Science and Sport dr. Maja Makovec Brenčič, Albanian Minister for Youth and Social Welfare Blendi Klosi, State Secretary at the Slovenian Ministry for Foreign Affairs Darja Bavdaž Kuret, Head of the Negotiation Team for Serbia’s accession to the EU Tanja Miščević and NGO representatives as well as experts from the region participated.