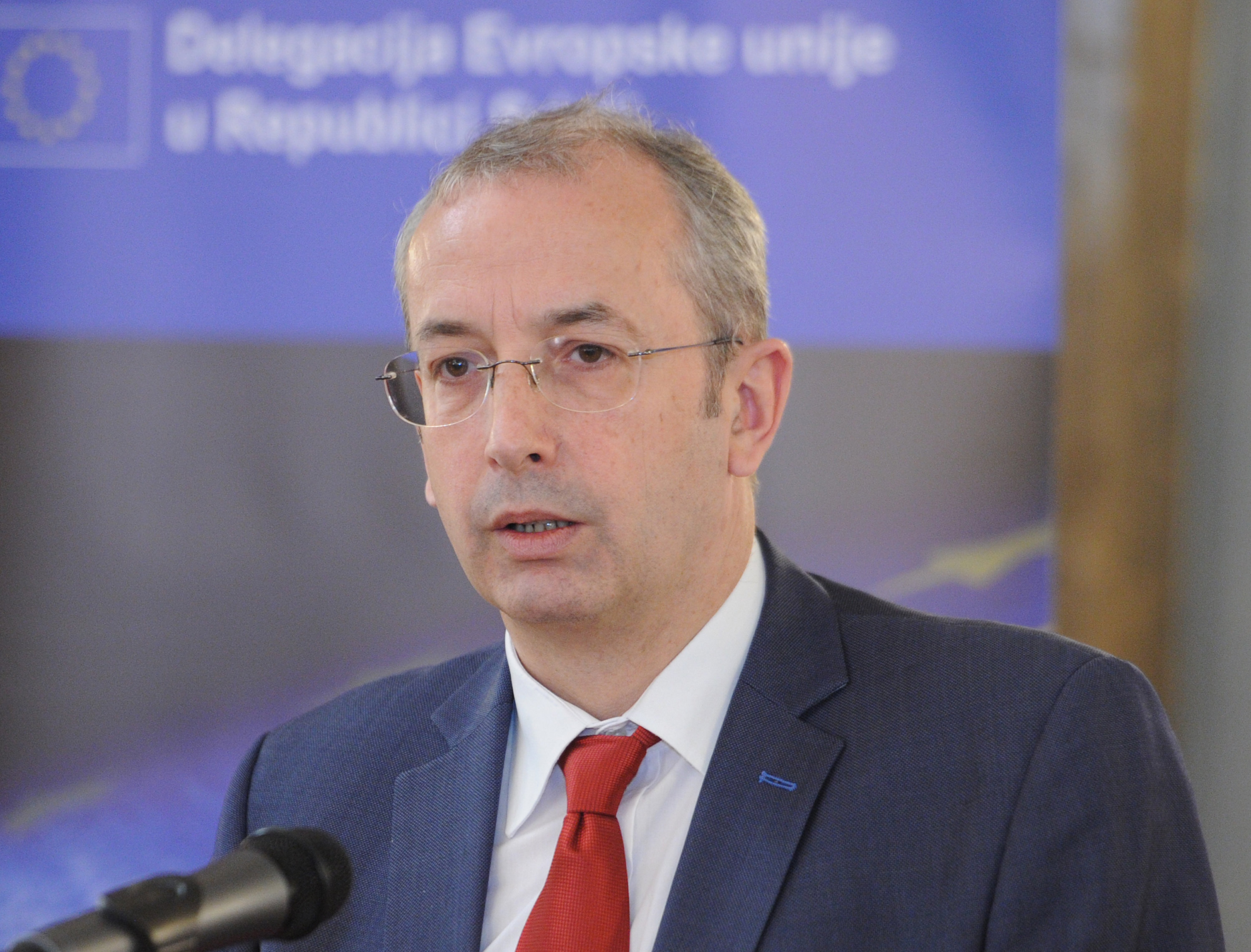 BELGRADE – Serbia was a major surprise for us, with people giving us a warm welcome everywhere we went, says Head of the EU Delegation to Serbia, Ambassador Michael Davenport, in a farewell interview with Danas, Serbian daily, summing up impressions of his six-year stay in Belgrade, first in the capacity of UK Ambassador to Serbia and then as the Head of EU Delegation since September 2013.

That is a tough question. Like I said, we have visited every corner of the country, but what left the biggest impression on me was the diversity of Serbia. The first pace we visited outside Belgrade was the Iron Gates gorge along the Danube. To be more precise, we have visited Lepenski vir, Golubac and Kladovo. Open space and lowlands of Vojvodina, criss-crossed with wonderful hills of Fruska Gora, are just as fascinating.

What were your most difficult tasks during the mandate in Serbia?

Being an EU Ambassador means performing a number of tasks, including cooperation with officials and civil sector. It means tackling crucial issues regarding EU enlargement, including the rule of law, economic and public administration reform. I would say those were the key challenges, faced by any country which embarks on the EU path. Drawing support in this process, from all actors, is an ongoing challenge. Of course, a number of outstanding issues arose along the way, including catastrophic floods that hit Serbia in 2014. I must say that I am very proud of EU’s response to floods in both Serbia and Bosnia and Herzegovina. The EU responded very swiftly. 19 Member States responded to Serbia’s request for assistance within 24 hours and helped in the immediate aftermath. I believe the most important thing was that EU Member States teams helped on the ground to, let’s say, pump out the water, whereas the EU supported Serbia by allocating money for the aftermath of floods, building schools and homes, supporting over 30.000 farmers and more than 500 small family companies. The EU responded as if Serbia was already an EU member. If it was not for EU assistance, Serbia would need much more time to recover its economy growth. What matters now is to increase flood prevention. Another ongoing challenge is, undoubtedly, the migrant crisis. We are all facing the same challenge and the EU has partnered up with Serbia in addressing the migrant crisis and has, among other things, allocated EUR50 million to make sure Serbia remains on the right track when it comes taking care of migrants in the country.

In November 2016, Serbian Radical Party MPs hackled your presentation of the EC Annual Report on Serbia. How did it make you feel?

I think what matters is to understand that they did not only prevented me from speaking, they did it to every other MP in the room. It was not supposed to be a mere presentation of the Report, but a discussion. In other words, they prevented all members of the European Integration Committee from speaking their minds about the Report. The European Integration Committee had invited me in my capacity of the EU Ambassador to talk about the Report as has been the case in previous years, and to take part in the discussion. Usually the representatives of all parliamentary parties contribute to discussion not only by asking questions but also by making remarks, sometimes commending it, sometimes voicing their criticism. So what happened was an obstruction of Committee’s work as the Committee is tasked with arranging such sessions. It was a challenge for the Parliament so I addressed the Speaker in a letter asking her to make sure such obstructions don’t happen in future. I have never received her response. Also, I gave her my view of the situation and said I was ready to return to the Parliament once adequate conditions for a discussion are in place.

In an interview you gave to our paper in January 2016, you said that your cooperation with Serbian officials was “regular, comprehensive and fruitful”. Has anything changed in the meantime, in terms of your relationship with the Prime Minister or any other official?

No, cooperation with the Serbian Government remained regular, comprehensive and fruitful. The point is that Serbia has paved its way towards the EU and set the membership in the Union as its strategic goal. I have repeatedly said, the EU Delegation to Serbia is tasked with providing the greatest possible support to Serbia, not only its Government, but the country as a whole, and helping it prepare to assume the obligations arising from the membership. It means keeping in profound, intense and regular contact with the Government of Serbia at all levels. We have maintained such a practice and I am sure it would continue in future.

When it comes to country’s EU path, what are the most important tasks Serbian authorities will be charged with in the next couple of months?

I have already mentioned key priorities – the rule of law, economic and public administration reform. These three areas are in the centre of EU’s attention and I believe are the most important for Serbian Government as well. In 2016, Serbia opened negotiating chapters dealing with the rule of law and there is much work to get done in that area, especially when it comes to independence and efficiency of justice, combating corruption and acting on recommendations regarding war crimes prosecution, where the appointment of new prosecutor remains the biggest challenge having in mind that it has not been done for a year and a half now. The EU had a very positive response to the steps taken by the Government regarding the economic reform. Serbia has recently come up with an economic reform agenda for the period 2017-2019 and we, as the EU, will continue to support it in the implementation of difficult economic reform and the part concerning the public administration reform, the area for which the EU has earmarked EUR80 million. Also, the two largest areas that require a great deal of work, especially in terms of planning, are worth adding to the list.

The first area is environmental protection and the second is agriculture. As shown by recent discussions dedicated to the monitoring of IPA assistance, project design in the area of environment requires a great deal of work. We have a solid basis for investment in, let’s say, waste disposal and waste water, but there is still a number of cases which raise concern regarding partial fulfilment of obligations in terms of investment and permits at the local level. In other words, more effort should be made in this area in order to attract investment from the EU, including the European Investment Bank.

The Government should devise a plan for agriculture and regional development, especially when it comes to finance deployment, having in mind that the EU has made available EUR175 million for such purposes. I hope that the right steps will be made in this direction by the end of 2017 because we stand ready to implement said programme once the conditions on Serbia’s side are in place.

Furthermore, we expect the Serbian Government to finally implement its own communication strategy for bringing the EU accession process closer to citizens, through adoption of annual action plans.

Do you expect new chapters within Serbia’s EU negotiations to open soon?

As you already know, it is not only up to the EU and the European Commission to decide when a certain chapter would be opened. It depends, above all, on Serbia’s readiness to submit its negotiating positions and on EU Member States. I am certain we could expect new chapters to open in 2017. At this point, it mainly depends on the Government. Serbia had already been asked to submit its negotiating positions on some chapters and I believe that when it comes to opening of chapters, it is very important to keep the current momentum.

What do you think about the pace of Brussels talks between Belgrade and Pristina?

It crucial for both sides to implement previously reached agreements and the EU will continue to work with both sides to facilitate further progress in the process. I believe it is important to acknowledge the work done in the past. It is important to remember that the relations between Belgrade and Pristina have substantially improved in the past couple of years which can be attributed to the Brussels agreement and the implementation thereof. Some of the agreements have not been implemented and a great deal of works needs to be done, all of which requires continuous dialogue and engagement from both sides.

How do you see current media landscape in Serbia having in mind that the freedom of expression is one of the EU’s underlying principles?

You are right, the freedom of expression is one the EU’s underlying principles which is why we closely follow the media landscape in candidate countries. This is also among the concerns of the chapter 23. The issue of media is covered by Commission’s annual reports and was covered by the 2016 edition, too. I have nothing to add to EC’s 2016 annual report assessment and recommendations which, among other things, stressed the importance of creating conditions for full exercise of freedom of expression in all candidate countries in the region, securing more space for discussion in media and allowing relevant regulatory bodies to do their job. The overall media situation, and I am not referring only to Serbia, has not been uniform but has changed due to stronger presence of internet portals and visual media, that is electronic media. This means that average citizens have a lot of media content at their disposal. Another important aspect is setting high standards of journalism. It is always important to set standards to which others can aspire. In this context, BBC’s decision to relaunch its programme in Serbian is also significant.

Would you mind sharing with us any detail about your new diplomatic post?

The reason why I am leaving Serbia is because I have been elected to a new post. I am not allowed to say where I am going, all I can say is that it will be very, very different from Serbia and on another continent.