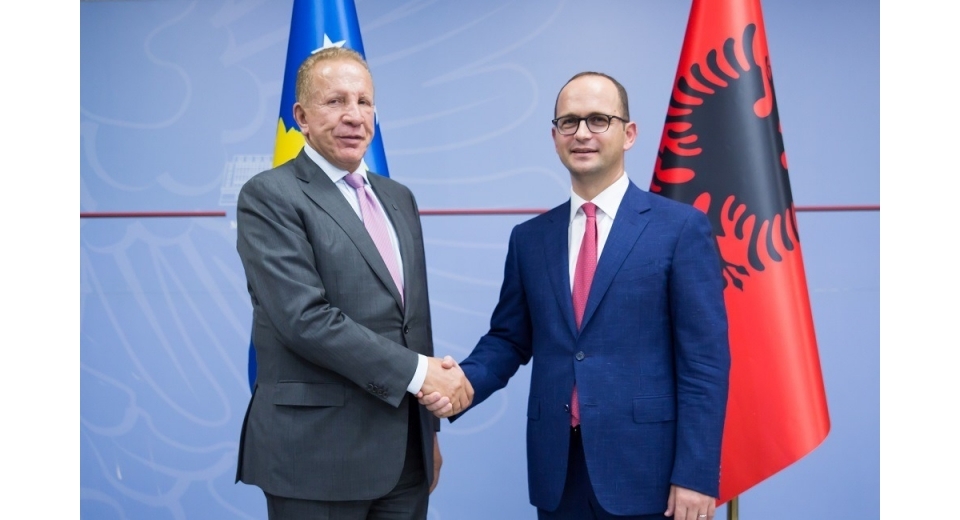 FM Bushati highlighted the fact that the first visit abroad of his counterpart Pacolli is in Tirana and it is certainly a clear signal of close political and fraternal cooperation between the two governments. Likewise, he made evident Pacolli’s contribution in state-building in Kosovo and especially in empowering its sovereign state.

The interlocutors shared the view that an all-embracing strategic partnership between the two countries in all the fields and levels serves as a model and encouragement for regional cooperation.

While holding of the consecutive joint meeting of the two governments in our country within the current year will be in function of a pragmatic cooperation radiating an added value not only to the geo-politic equilibrium of the region, but even to the joint Euro-Atlantic perspective.

The two officials discussed on the need of rationalization of forces, human resources in diplomatic and consular representation. “It is our common ambition to enhance the map of political and diplomatic cooperation so that to serve as well as possible to our citizens”, emphasized FM Bushati.

FM Bushati expressed his conviction that the steps taken until now with Kosovo in the context of unification of markets, removal of the trade barriers, infrastructure and energy connection are a great premise for stimulation of our interests in the context of the Berlin Process and especially in meeting the objectives set at the Trieste Summit for a common regional market.

In this context, it is expected to be put in operation a customs point of Kosovo at Durrësi Port that will make it easier the circulation of goods.

FM Bushati reconfirmed Albania’s support to all the processes that Kosovo is passing through and especially in advancing recognition of memberships in the international forums, cooperation with the NATO and the EU.

On his part, Pacolli congratulated FM Bushati on being reconfirmed in the office and emphasized the need of continuing joint diplomatic missions. Pacolli also focused on the free movement and expressed his conviction that between Rama 2 government and Haradinaj government will be fully implemented.

Brussels: The Government to analyze the recommendations of the Venice Commission regarding the Law for the languages

Tsipras’s visit to Macedonia: A new start in relations between two countries