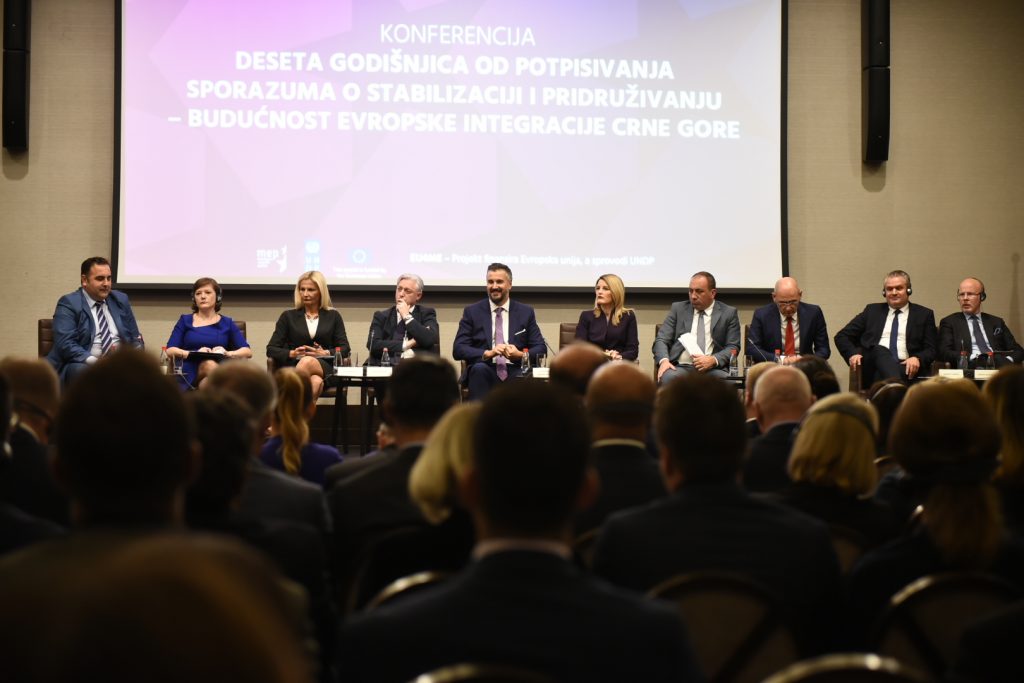 The tenth anniversary of the signing of the SAA in Montenegro; Photo: Ministry of European Affairs of Montenegro

The event was opened by the President of Montenegro Filip Vujanović, and the introductory part was addressed by MEP Eduard Kukan and Director for the Western Balkans in the Directorate-General for Neighborhood Policy and Enlargement Negotiations Genoveva Ruiz Calavera.

Vujanović recalled that the signing of the SAA began comprehensive preparations for Montenegro’s membership in the European Union.

“By its application, we strengthened European values, strengthened the security and stability of the state, encouraged economic progress and the growth of citizens’ living standards. The trade part of the Agreement created conditions for the free flow of goods, services, workers and capital between Montenegro and EU member states, with activities and efforts to become part of a single EU market as soon as possible,” said Vujanović.

In that context, he recalled that over the past ten years, Montenegro has achieved significant results through the EU accession process.

“It has been opened 28 chapters, of which 3 have been closed temporarily, using more than 620 million euro non-refundable. Visas for travel to 29 member states of the Schengen area zone, gross of GDP grew by 41%, and average gross salary increased by 51%,” said Vujanović.

MEP Eduard Kukan pointed out that Montenegro is a positive force in the region and a reliable and honest regional player.

“You have demonstrated a clear commitment to the European integration process and move with determination towards membership,” Kukan said. He stressed that Montenegro should continue reforms, focusing on the rule of law, which is the task of a whole country, not just the government.

Director for the Western Balkans in the Directorate-General for Neighborhood Policy and Enlargement Negotiations Genoveva Ruiz Calavera pointed out that the EU’s strategic priority is further intensification of the work on the integration of the entire region, and that progress in accession based on the merits of each country individually commands that each of the countries holds the key from the EU in their hands.

“Membership in the EU is not only the goal of your nation, it is also the firm and unquestioning intention of the EU” concluded Genoveva Ruiz Calavera.

Panelists talked about the importance of the SAA for Montenegro and the countries of the Western Balkans, the results of reforms and challenges in meeting the membership criteria, and the progress of the Western Balkan countries over the past twenty years. They exchanged views on the initiative of EC President Juncker to draft the Strategy for a successful accession of Serbia and Montenegro to the EU with the perspective of joining the 2025, as well as the positive effects of the EU enlargement and the entry of new members, but also the biggest challenges that the EU is currently facing.