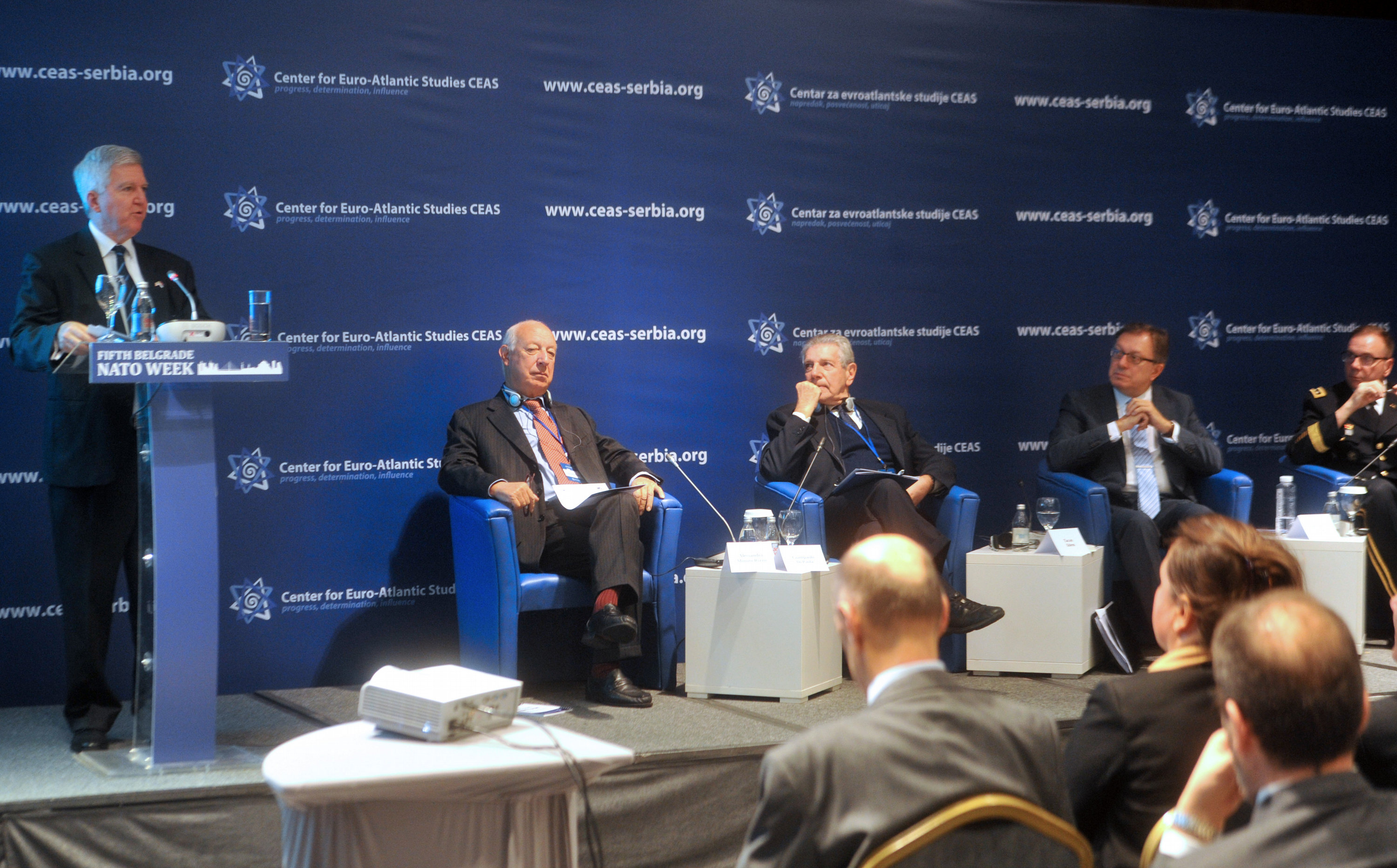 BELGRADE – The membership of Serbia in the EU, but also in NATO, are the two chairs Serbia should sit on – is said today at the fifth “Belgrade NATO week” conference.

Director of the Center for Euro-Atlantic Studies (CEAS) Jelena Milić explains it is the fifth NATO week organised in Serbia and its focus has always been on the cooperation between Serbia and NATO.

“From the very beginning, the goal has been for us to inform the interested public from Serbia and the region in a timely and objective manner about NATO, but also about the possibilities of the cooperation between Serbia, as a militarily neutral country, with NATO,” Milić said, adding that this year the focus would also be on the cooperation between NATO and the European Union.

Regarding the process of Serbia’s accession to the EU, CEAS believes that the EU would help Serbia if it would open Chapter 31 on foreign, security, and defense policy as soon as possible, given the growing Russian activity in the Western Balkans.

Deputy Assistant to Foreign Minister and Head of Security Policy Department at the Ministry of Foreign Affairs of Serbia Branimir Filipović says the strategic commitment for EU membership is clearly determined and Serbia actively participates in the security activities of the Union.

“Serbia belongs within the family of European nations,” Filipović points out.

Regarding the military neutrality of Serbia and NATO, Filipović notes that neutrality is not an obstacle to further enhancing cooperation.

“Neutrality does not mean isolation and it is not an obstacle for a more active role in the field of security. Although the past cannot be forgotten, it is necessary to work on dialogue and a common future,” explains Filipović.

As far as the role of KFOR in Kosovo is concerned, he considers it of paramount importance both for the protection of citizens and the cultural heritage of Serbia.

“It is important that the mission does not diminish its presence in Kosovo,” says Filipović.

Tacan Ildem, Assistant Secretary General of NATO for Public Diplomacy, says that the visit of the President of Serbia is of great importance for further relations with Serbia and NATO.

“The key element of our cooperation is mutual respect. NATO and Serbia are close partners and we have developed and strengthened our cooperation”, explains Ildem.

“NATO and Serbia face common security challenges and therefore this partnership significantly contributes to peace and security, both in Serbia and in the region,” says Ildem.

The US Ambassador to Serbia Kyle Scott states that the door to NATO membership is open but yet not mandatory.

He also agreed that there was no contradiction between Serbia’s neutrality and cooperation with NATO.

“NATO respects the neutrality of Serbia, and Serbia is the one that shapes this cooperation,” Scott explained, adding that the benefits of cooperation for Serbia are irreplaceable.

Regarding the membership of Serbia in the EU, Hodges believes it is of importance for the further progress of Serbia.

“We will do everything that is in our power to support the path of Serbia towards the EU,” says Hodges.

Matea Norčić Štamcar, Deputy Head of the EU Delegation to Serbia, says strengthening European security is important and everything needs to be done to ensure peace in Europe. Serbia is already significantly contributing to the security of the Union by its participation in missions in the field of common security and defense policy of the EU.

“Serbia is currently participating in four EU missions, with 35 members, thus making the largest contribution to missions in relation to other countries in the region,” she said.

In the panel “NATO and the EU in a new strategic environment”, speakers addressed the new challenges that both the EU and NATO are facing.

Ildem says a co-operation between NATO and the EU is crucial, especially in the fight against terrorism and the strengthening of cybersecurity.

“NATO alone cannot fight terrorism, we need other partners like the UN and the EU,” says Ildem.

He adds that NATO has been in its ongoing adaptation process to adequately respond to the current challenge.

One challenge is Russia, he said.

“Russia must respect the international order, but has missed the opportunity to show that it respects peace and stability,” he explains. He adds that there are many areas in which NATO and the EU can cooperate with Russia, but Russia, on the other hand, is the one that should show responsibility.

“There are many places where we can work with Russia, such as climate change and the fight against terrorism, but Russia needs to show responsibility,” said Hodges.

Giampaolo di Paola, former chairman of the NATO Military Committee, believes that the security environment today is completely different than it was ten years ago, thus adding that there is concern over what Russia is doing today.

“We need to strengthen our forces to prevent something bad going on. We have to adapt to the new circumstances and challenges,” Paola believes.

“In this process of transformation and adaptation, the EU should play an important role,” he said, adding that the EU has already taken a step further in this direction.

At the second panel called “NATO and the EU”, the existing mutual cooperation of the two and the prospects for its improvement have been discussed.

Kristi Raik, from the Finnish Institute for International Relations, welcomes the signing of the PESCO and hopes that this initiative will strengthen NATO and the EU.

“The EU’s cooperation with NATO has been greatly improved by the EU itself, and such progress is good,” Raik said, adding that there are numerous goals that have not been achieved, yet she hopes that the situation PESCO will be somewhat different.

Director of the NATO Defense College Foundation, Alessandro Minuto Rico, says the NATO alliance is an international organisation, whereas the EU is a political project that seeks to become a supranational institution.

lldem says NATO and the EU are doing their best to strengthen co-operation.

When it comes to the collective security of Europe, NATO is the primary player aimed at protecting it.

As for cybersecurity, Ildem explains that NATO is conducting exercises together with the EU.

“We do our best to bring our experts together in order make everyone better,” says Ildem.

Goran Svilanović, Secretary General of the Regional Cooperation Council, says that we should have a more realistic conversation about NATO in Serbia if we take into account the attitude of citizens towards NATO.

“According to the “Balkan Barometer”, about 30% of respondents to the survey said that Serbia’s accession to the EU was bad, while around 26% said it was good. The others were undefined,” notes Svilanović.

When talking about the threats to the security of the Western Balkans, he believes that they do not come from the migrant route region.

“The threats we are talking about do not stem from the migrant route region, yet, additional cooperation between NATO and the EU will improve stability and security in this region,” Svilanović said.

[EWB Interview] Tzifakis: EU lacks a plan for the region beyond immediate troubles