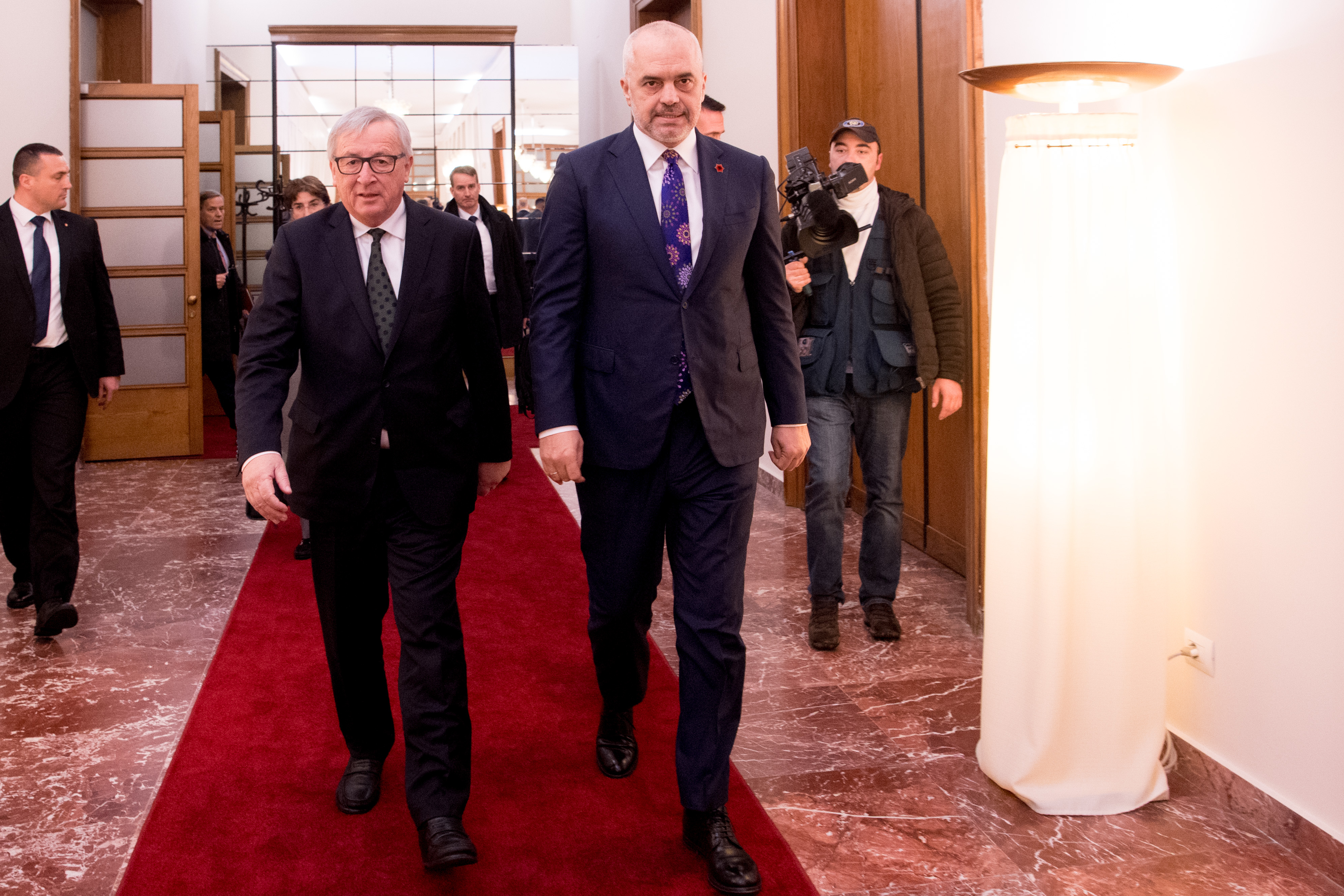 TIRANA – Albania expects a full and clear recommendation from the European Commission to start the accession negotiations, Prime Minister of Albania Edi Rama said in his opening remarks at a joint press conference with the President of the European Commission, Jean –Claude Juncker, in Tirana on Sunday evening.

“We believe that we deserve a full and clear recommendation from the European Commission and I hope the member states will respond positively and unanimously,” Rama stated.

“It comes ahead of the decision on the EC’s recommendations to open the negotiations with Albania and following the publication of the new enlargement strategy, which forms an encouraging basis for all countries in our region,” Rama said.

“We met last December in Brussels and today I had the opportunity and privilege to closely inform President on the latest developments, progress in reform efforts and Albania’s commitment to keep on being involved in an intensive alignment process with the EU through our country’s daily work on one hand, and a constructive actor in fostering regional cooperation and ensuring good neighbourhood in entire region on the other,” PM Rama added.

Recalling that EC had recommended opening of the accession negotiations with Albania since November 2016, the government head underlined the indispensability to press ahead with the justice system reform and implementation of the vetting process in particular.

PM Rama said he had informed EC’s Juncker that “exactly 17 top prosecutors and judges have withdrawn from vetting, meaning they will no longer be part of the judiciary, in a clear indication that vetting is functioning as a strong impetus towards achieving the objective for a new and independent justice system.”

Rama affirmed his government’s unwavering commitment to move ahead with the European integration reforms.

“This is a unique and irreplaceable process in our state-building efforts and functioning of democratic institutions in our country. To us, the EU integration is an attempt to build European Albania,” PM Rama stated.

“Albania does not cease to accumulate progress since it has embarked on many structural reforms in many areas. The progress is impressive and it will convince the European Commission to recommend opening of the accession talks,” Juncker said.

“Albania’s place is in the EU. I did not come here to make empty promises. EU accession is a merits-based process. I am impressed by reform process and we encourage Albania to continue on the path of significant reforms in the fight against organized crime, vetting process and organization of the judiciary. Your place is in Europe, you have to prepare for your future. We shall be on your side,” Juncker stated.

The EC President reiterated that the aspiring countries should resolve the all possible border disputes before joining the bloc.

“This is a test for Albania’s commitment to become a member of the EU as soon as possible. Until then, we support Albania in all efforts to improve relations with the Western Balkan countries,” he said.

Asked by journalists about pending issues between Albania and Greece, President Junker emphasized that to integrate into the EU, there should be zero problems with the neighbours.

“I think that problems should be resolved as soon as possible. We have a window of opportunity open that should allow both sides to solve the problem before membership,” he said, adding: “I want to encourage Albania and Greece to agree, and this would be an additional reason to recommend opening of negotiations when the moment comes,” he concluded.